Around The World In 80 Swims

Follow our new global feature series with international entries and aquatic tales from our favourite open water swimmers - updates every Thursday! We'll take you to memorable locations around the world, through a selection of incredible wildlife encounters, gruelling challenges and life-changing experiences! 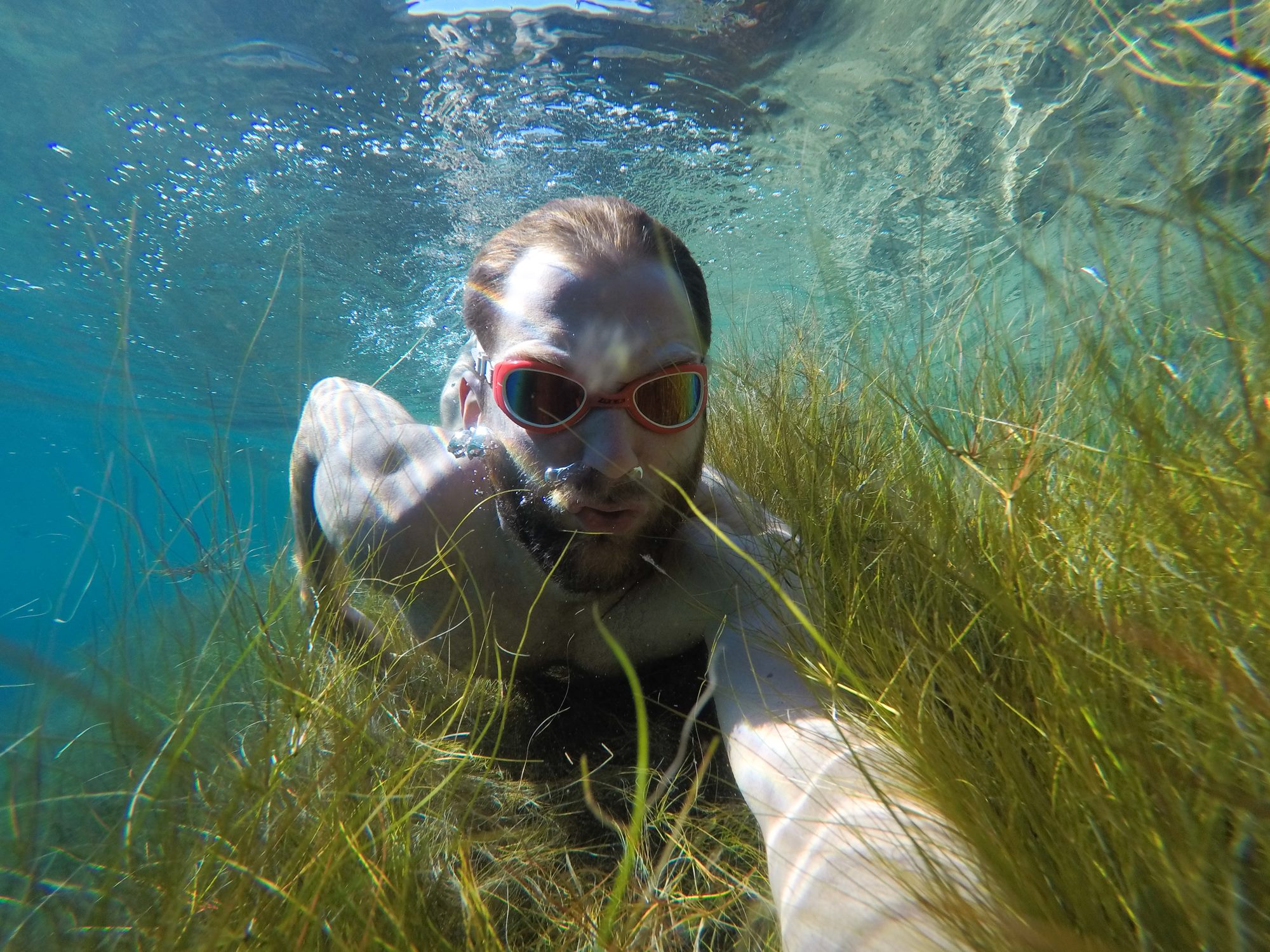 "Six-thirty in the morning, the sun creeps over the summits of Cairn Gorm, and my legs begin the mountain run into Loch A'an. This crystal clear water sits at the head of Glen Avon, tucked into the mountains. Appearing blue-green to the eye from above, under water is a different world. Almost 3km long and at 725m elevation, the loch can freeze fully in winter. Even now in summer it's brutally cold, but always inviting. With no quick or easy way in or out, this is a committing journey in the Scottish mountains, and should be prepared for accordingly."

"After a lung-bursting ascent, my first view fills me with joy at the swim that awaits me. I follow the Fèith Buidhe (Yellow bog-stream) down a series of steep cliffs, peering through the ice-tunnels formed as the last winter snow melts. A hint as to how cold it will be... At the loch, there's barely a moment of hesitation - I NEED to swim. Stripping down, I ease into the water. The knife-sharp cold is a relief to my legs. Sunlight plays through the surface, shapes dance on the sand below. I play for a dip, soaking in my surroundings. Afterwards, I am dried by the sun, my body refreshed for the run back out over the mountain."

'After a lung-bursting ascent, my first view fills me with joy at the swim that awaits me...' 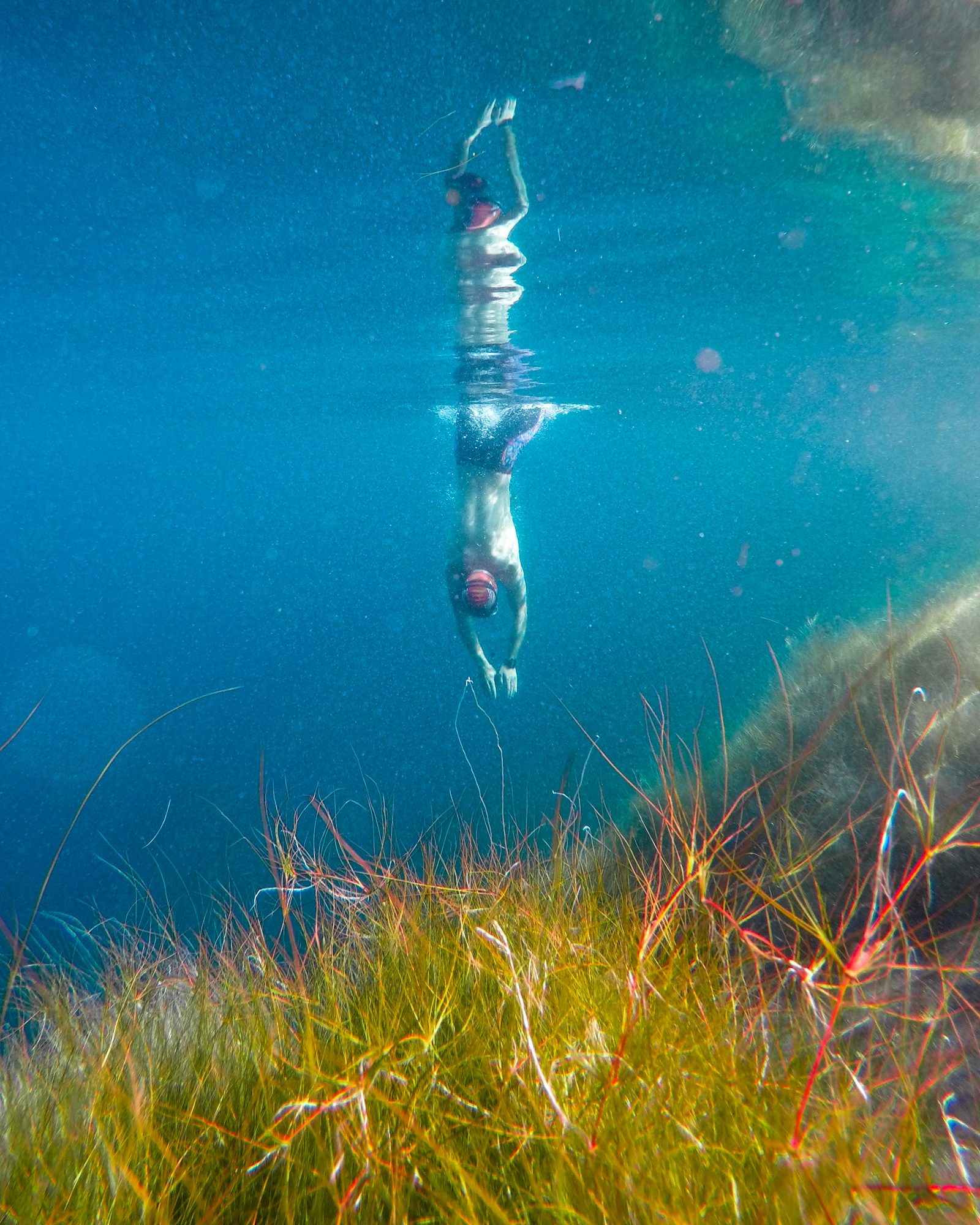 "I am drawn to swimming in locations that inspire and amaze me. Here, I remember my senses feeling so heightened. The simplicity of the adventure, the reset of the mind, the beauty of the landscape - this swim in Loch A'an sticks with me as an almost spiritual experience."

"We could remove the romance, and say that was just the sheer endorphin overload of running and swimming... but where's the fun in that?" 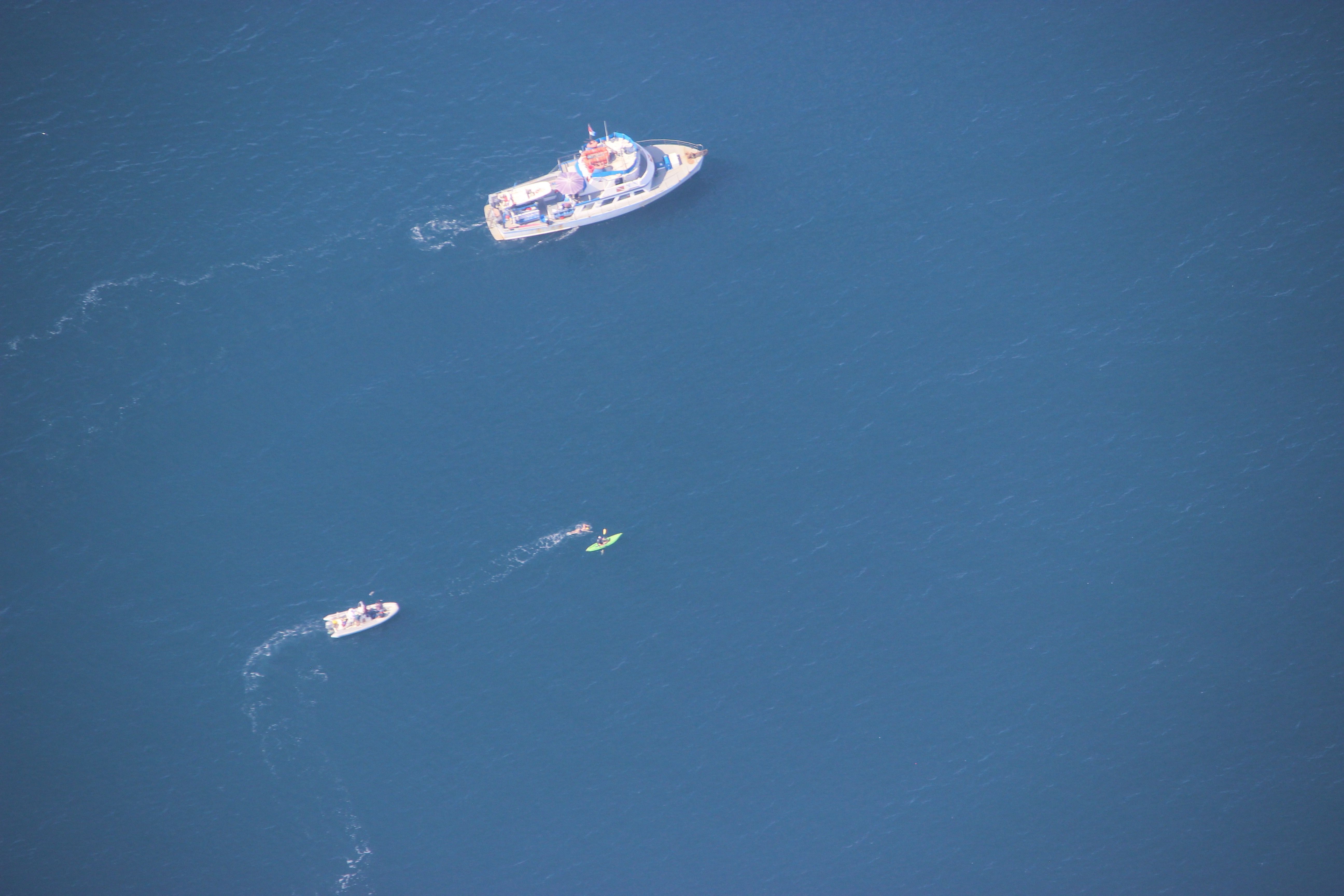 "I was in the Moloka’i channel [at night] and the Pacific water moves so much, the pilot boat can't stay right alongside you for safety reasons. I have a kayaker alongside me, but the boat kind of leapfrogs ahead. The pilot boat is lit up like a Christmas tree. I've got a light on the back of my head, so the pilot can see me. And I lifted my head to take my hourly drink and literally within 30 seconds of the boat having pulled ahead, the kayaker says: ‘please don't panic but there's a shark behind you’. And so we were in an eight foot swell. So the pilot boat didn't have a hundred percent visibility of the kayaker. They could only see him every minute or so. And so the kayaker was signalling and flashing his head torch to the boat to say there was a shark. The shark sloped down and came and literally swam underneath me and around and rested his nose against the front of the kayak. Only I didn't know at the time because I was obviously level with him in the water."

'...it's one thing to know that there are sharks in Hawaii, but another thing entirely to know that a shark knows exactly where you are and is very close...'

"Obviously you don't want a light shining in the water normally in the dark because light attracts little things and little things attract bigger things, and bigger things, you know, bite you sometimes. But you really need to know what's going on in that moment. So the kayaker, he turned his head torch on main beam and was shining it down so we could watch, you know, and see where the shark was. And yeah, so I lifted my feet because I could see it looming underneath me, but it went round to the side of the kayaker. He knew where it was. Mostly I couldn't see and it was less than two meters from me for about six or seven minutes, before the pilot arrived. They circled back around to find out what was going on. Well, you know, we were just very still and very calm. And it was very - it was very surreal. Um, we actually, I went heads up into treading water, because if you lie on the surface of the water and are splashing, it looks like prey - like a dying fish. And we're not their natural food. Um, so staying upright, and treading water and staying calm was the best thing. After that the reality hits and, you know, it took me an hour to get my face down in the black water again. So I was doing a bit of a heads-up breaststroke - it's one thing to know that there are sharks in Hawaii, but another thing entirely to know that a shark knows exactly where you are and is very close."

Read our interview with Beth 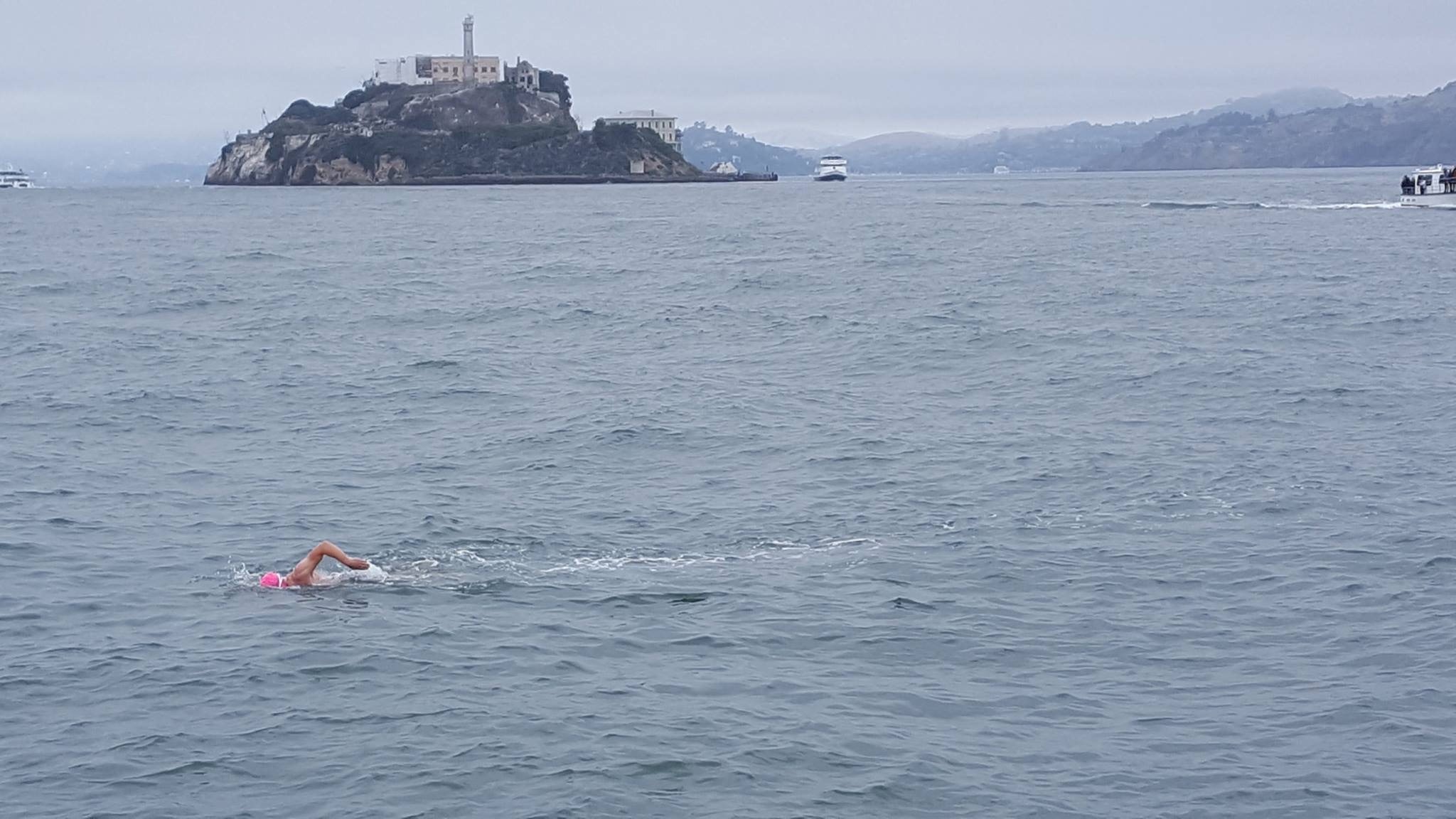 "When I reached the beach at Aquatic Park I clawed my way onto the sand, stood to my knees and turned around. I looked at Alcatraz and the mighty Golden Gate Bridge and thought to myself that San Francisco has to be one of my favourite cities in the world. The Castro has the rainbow coloured blood of some of the most inspirational LGBT icons of all time painted across its streets. To stroll down any of its roads is a lesson in multiculturalism and the melting pots of many cultures criss-cross in Little Saigon, Chinatown and Little Italy."

'There is no better way to experience San Francisco than escaping from the rock!'

"This is truly a city which celebrates a varied and shared history and I couldn't have felt luckier to be stood there on that beach overlooking the bay. Swimming is the perfect way to immerse yourself in other cultures and places, a unique way to immediately experience a new place from a different perspective. How lucky and privileged I was to be able to swim from Alcatraz, to crash into the icy cold water and do one of the most iconic swims on the planet. Lots of people at work were asking 'Is it clean in the bay?' or 'It must be really dirty'. Well after the swim I went on a trip to the Farallon Islands just outside of San Francisco and from when we left right up to when we got back we saw Humpback Whales, Grey Whales, Harbour Porpoise, Common Dolphins, Northern Fur Seal, Stellar Sea Lion, California Sea Lion, Sunfish, Puffins, Blue Footed Boobies, Jellyfish to name but just a few." 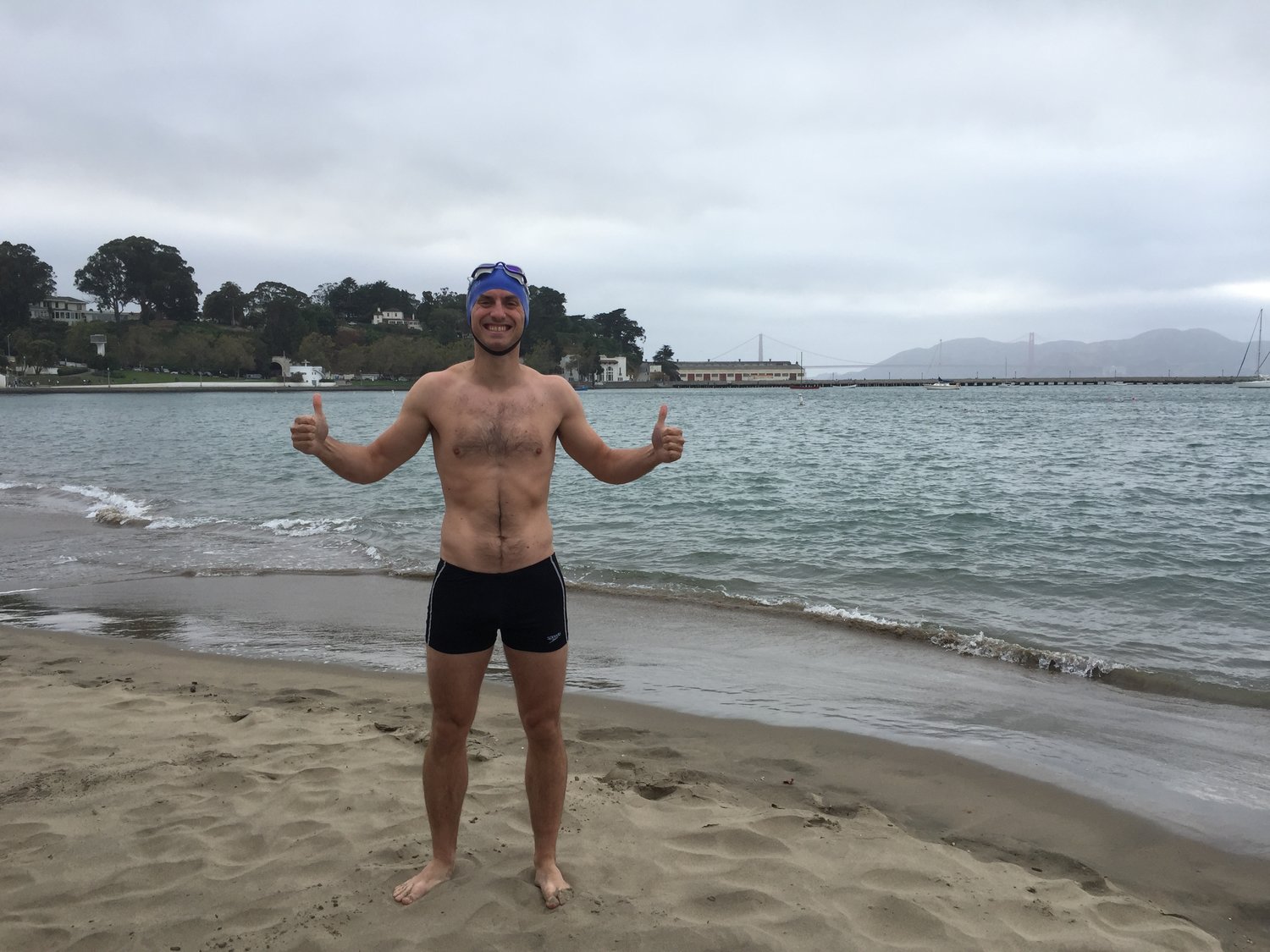 "I didn’t know it at the time but the ship captain shepherding me across told me a juvenile humpback appeared behind me and followed for a few minutes of the 1.24 hr swim. Perhaps it knew that the strange human above it needed a guide to get him across the icy cold strait separating Alcatraz from the bay. There is no better way to experience San Francisco than escaping from the rock!" 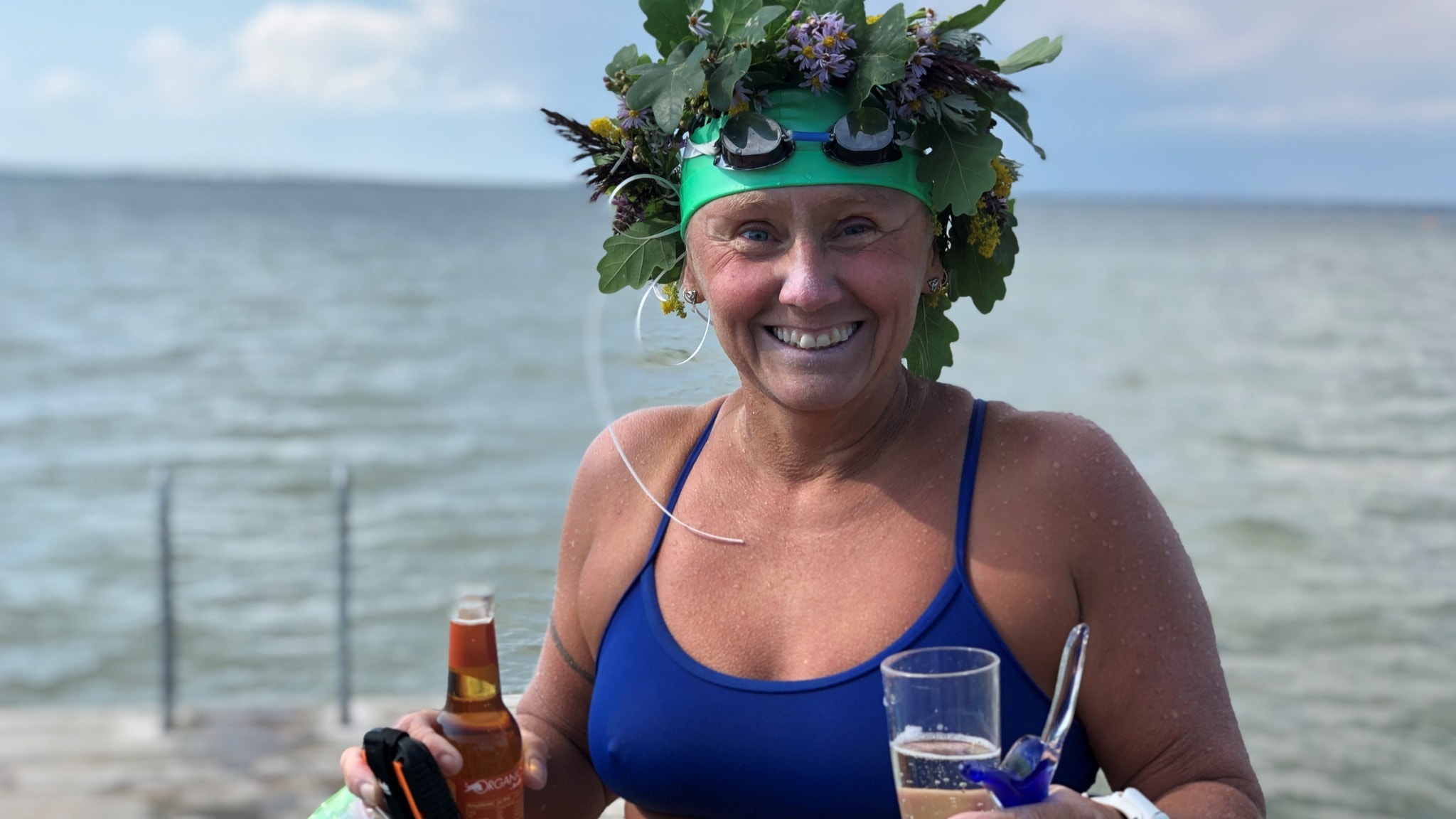 Anna swam a circumnavigation swim of 333 cumulative kilometres around the Swedish island of Öland, which is the second largest island in the country. Between July 28th and August 14th 2020, Anna set out from the southern ferry town of Färjestaden and returned there at the end of her swim, after a total of 117 hours in the water, with only one no-swim day.

"I had never been there before. I saw everything from the water and my father he had fun on the land and all the little roads... Because of _Corona I thought I’d do some big swim here in Sweden. Three years ago when I swam around Isle of Man, my kayaker said: ‘Anna, come do a swim around Öland, in Sweden’. I said: ‘Yeah, I could do that.’ He was planning to come to Sweden to kayak for me, but he got stuck on the Isle of Man. So, I asked a friend of mine to help me out. After roughly 250 kilometres, I told [my kayaker] I wanted to go on alone. The rest of the swim I did with my father, this couple we met on Öland and another swimming friend of mine. So they were on the shore. And we had done marks where they should stand and they were there. So, when I got there they just waved to me and I could just continue."

'So when I was arriving, he was up in the lighthouse with a Swedish flag. It was so great.'

"When I was swimming by myself, I told my father I’m going to be so close that I can see the bottom. So, I won't be any further out because I have to be safe and I had this buoy that normally I never swim with, and I have my GPS and I have my phone in it. There was not much of currents, but there was quite a lot of wind. We had a little push when we were going up North, from behind. We don’t have much of currents here in Sweden. The best day was when I was getting to a lighthouse where there was a former swimming club friend of mine – he is running the lighthouse. So when I was arriving, he was up in the lighthouse with a Swedish flag. It was so great. And it was the same when I was going to leave – he was out there, saying: 'bye, bye!'"

Read our interview with Anna 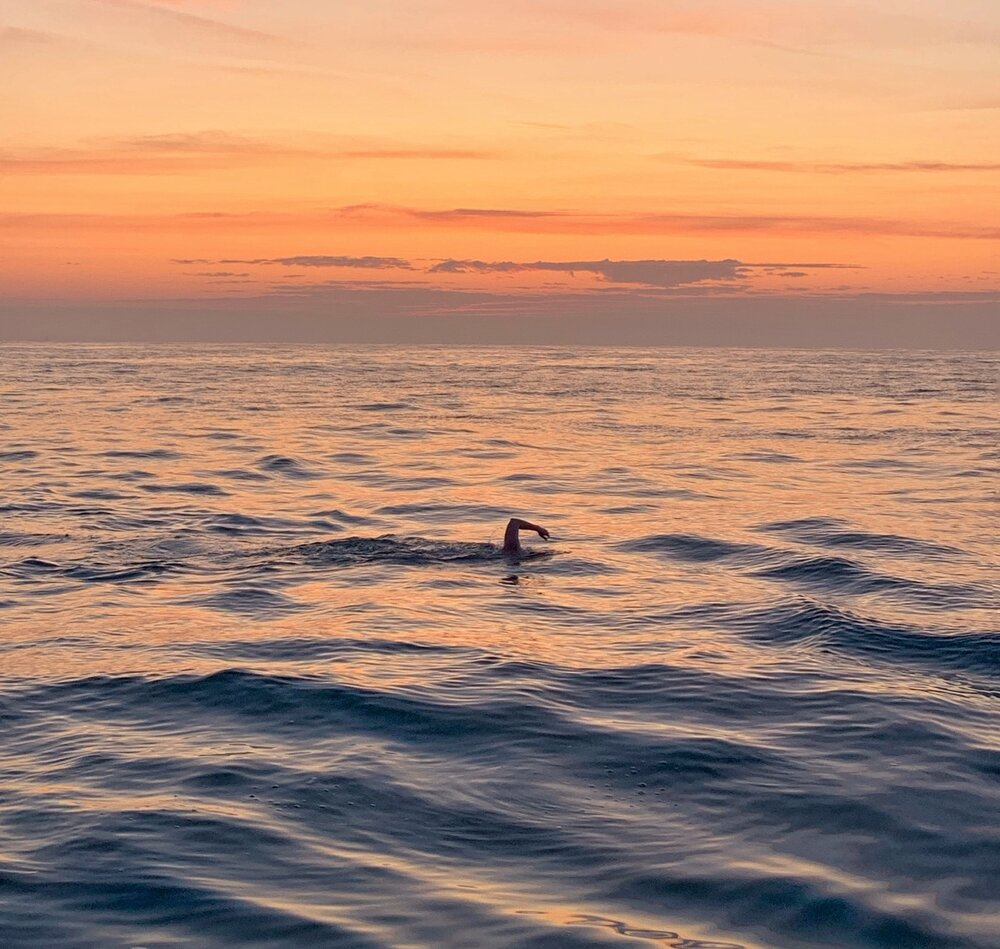 Having completed the English Channel solo, Dee was asked to be a part of the 6 person Irish Sea relay swim team. It was also a fundraiser for the Gavin Glynn Foundation, a charity which assists the families of Irish children who need to travel abroad to receive treatment.

"On the end of the spring tide, there was an incredible three-day weather window coming in which was too good to pass up. This meant our start came earlier than planned and I felt out of my comfort zone. This was a crossing that had only ever been completed once before and the only information available on that was the time. No official observer, no report to consult, no standard start points or predicted landing spot. Everything about this swim seemed wild. The swim started at 22:30 in darkness and finished 38 hours and 52 mins later. We had swum for two whole nights and a day and a half, but we made it. Everybody on the team swam at least 6 hours with two completing 7 hours. We were very lucky to have incredible weather throughout this swim and although the water was 11-13 degrees, at no point did it feel cold or unbearable. the day swims were flat and bright, and the night swims gave me my first experience of swimming in phosphorescence. This was an excellent team to be a part of and almost €20,000 was raised for the Gavin Glynn foundation."

'Everything about this swim seemed wild.' 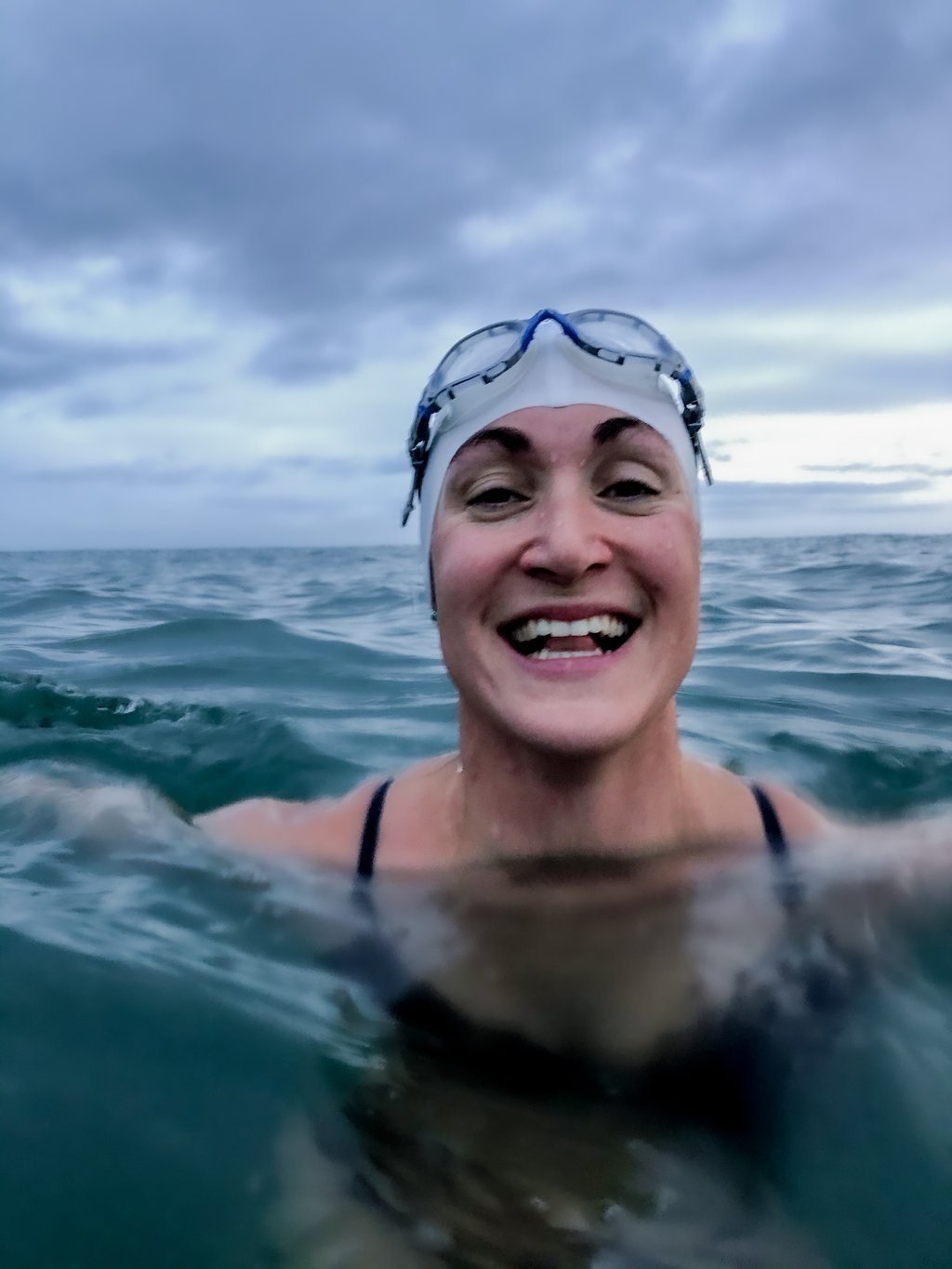 "I’ve been so inspired by what I have learned and achieved along the way that I have already given some talks in schools and given a few radio interviews. I have been helped along the way by so many I am eager to give back in any way that I can. Overall SwimTrek have had a huge part to play in leading me to a successful English Channel swim but ultimately it is the people that SwimTrek bring together that makes these trips invaluable."

For a chance to join this growing feature, please share your most memorable swim stories with us on our social media channels and don't forget to tag SwimTrek: #80swims