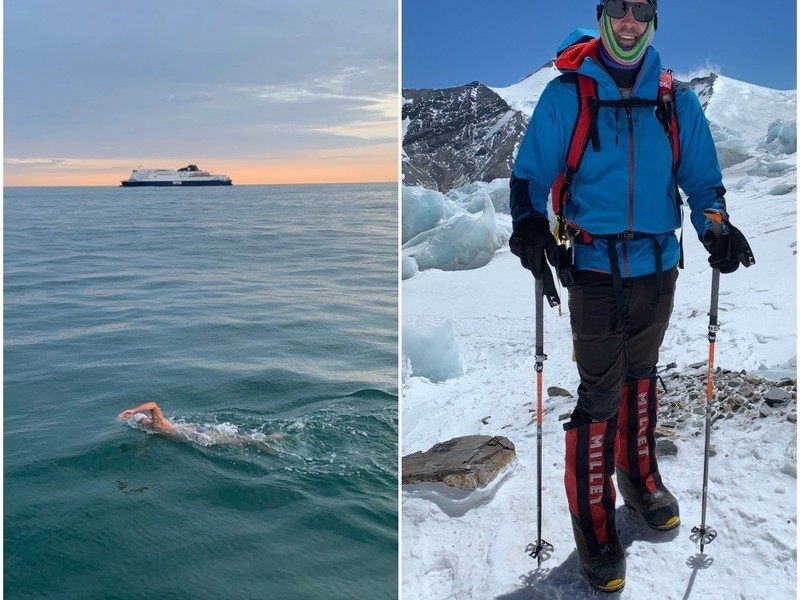 Rob Lea made history in July 2019 when he became the first person to summit Mount Everest and swim the English Channel in the same year. Only a handful of people had ever achieved the two feats before, so to take on both in such a short time frame is nothing short of amazing! Rob joined us on our Channel and Long Distance Training Camp in Mallorca in 2018, and here he's put together his story on why he decided to take on the challenges and the impact his camp had on him.

We all have a story. A reason the Channel, or the open water has called to us. A reason we’ve spent years training by staring at a black line. But if that’s not enough, we then put ourselves in nature, pushing the natural limits of our mental and physical being. We push ourselves to places where we’d all be crazy not to question our own mental status. You’d think with all those hours in the water, with nothing but my own thoughts, I could tell you the reason for it all. Maybe I need just one more swim, one more dip in the pond, or one more Channel and I’ll have that answer for you. Until then, this is my story.

I’ve always been an athlete. I competed in triathlons for years at a high level. In 2012, I was the world champion in the half Ironman distance for my age group. I’ve also always loved climbing mountains. In 2009, I summited my first high altitude mountain, the highest mountain in South America - Acongaugua (22,841 ft/6,959 m). But after an ankle injury in 2016, my doctor told me “medically speaking, you shouldn’t be running”–in that moment, at the doctor’s office, I decided I needed a goal. Because of my swimming background, I resolved to swim the English Channel despite knowing almost nothing about it... As I researched the English Channel, I learned swimmers call it the “Everest of Swimming”. And because I was also a mountain climber, I looked to see if anyone had swum the English Channel and summited Everest? During my research, I found that eight people had (Peak and Pond Challenge). When I discovered no one had done it in the same year, I set out to achieve that. But, as a triathlete at heart, I chose to create my own, sort of triathlon out of three athletic events, they would become my Ultimate World Triathlon: to summit Everest, swim the English Channel, and bike across America–all in the same year. At the time, I decided to attempt the “Ultimate World Triathlon,” I hadn’t swum longer than three hours straight, and had limited experience swimming in cold and ocean water. At the advice of a high school swim mate, Candice (Chaney) Wright, I signed up for a SwimTrek camp, the Channel and Long Distance Training Camp in Mallorca, with the hopes of improving my long-distance swim skills and to learn techniques for swimming such an expansive distance. It turned out that I got a lot more from the SwimTrek camp than just swimming techniques and knowledge for long distances swimming in cold temperatures–maybe most important, I made invaluable friendships that brought support and encouragement as I trained for my swim. To this day, I have close contact with all the members of my Mallorca swim camp via a WhatsApp group chat. A legend, Martyn Weber (an EC swimmer) helped this novice with logistics for the swim. I meet Anna Ploszajski (EC swimmer in 2018) in the cold water of Mallorca and she crewed me along with my fiancé during the English Channel swim and was invaluable. I also met Ashleigh Seymour at the swim camp. During the year leading up to my swim, Ashleigh (a new inductee in the EC swim club!) and I went back in forth with our accomplishments, setbacks, positive affirmations and doubts. And, although I don’t have time to name ever person on my Mallorca swim trip, I can tell you that during my swim, I had an enormous wave of support from ever person in that group I met in the Spring of 2018. In addition to the friendships, one of the important takeaways from the camp was understanding the importance of body weight when spending hours in cold water. When I showed up for my SwimTrek camp I was a good pool swimmer who could do alright in open water. I was ok in cold water, but not for hours on end. I couldn’t sustain hour after hour in open water–in fact, I couldn’t complete the 6-hour swim during my SwimTrek camp because my body wasn’t equipped to withstand the cold at that time. That was about 16 months before I was supposed to swim the Channel. This became a tricky aspect of my preparations before and after Everest. I went into Everest the heaviest I’ve ever been. I knew I would lose weight on the climb from past experience and in fact, I lost 20 pounds on the mountain. I was successful in summiting Everest and did so on May 24th. I arrived back home On May 30th and was set to leave for the UK for my swim on July 7th. I had just over a month to figure out how I was going to get across the Channel, and I hadn’t swum for about 3 months at this point. In that month, I needed to regain the weight I lost, plus add some additional weight to stay warm enough on my English Channel attempt. This meant I couldn’t do the swim volume I wanted to do because with that sort of training, I wouldn’t be able to put on the weight I felt like I needed. My only major swim between Everest and the Channel was my 6-hour qualifying swim, which I completed at the Jordanelle Reservoir 16 days before my channel window started. That was my longest swim ever by almost double, and it was in a lake. Cutting it close is an understatement! But I knew I could swim, and I had to trust in my mental and physical training that it would all come together. I landed in England with my fiancé, Caroline a few days before my window to beat jet lag before getting in the water. It was good timing because I was feeling under the weather during my travels to the UK and felt like I needed time to rest and recover. However, after one night of sleep in Dover, the boat captain called with news that the weather was good and gave me roughly five hours to grab my bags and be at the dock. I had just woken from an uneasy night of bed sweats and not feeling well, but I didn’t even have time to think about how I was feeling, I immediately shifted to go-mode.

I felt quite good once I got in the water. And I swam well the first couple hours and got my confidence back. As the sun started to set after a few hours, I saw my first jellyfish. There was a stretch of about or 4 hours where I encountered hundreds of jellyfish. I can’t tell you how many times I was stung, but it certainly more than 50 and likely as many as 100 stings across my body, including two super painful direct blows to the face. I felt like I handled the stings relatively well, but it they were adding up and it was starting to get to me. I wondered; can I keep this up for another 6+ hours? Anna told me that they would subside when the tide changed… and they did for the most part. Like any long-distance athletic event, crossing the English Channel required mental stamina. As I spent more time in the water, I told myself half-truths to get to the other side like, ‘Once I’m done, I never have to swim another stroke again if I don’t want to.’ Time seemed to melt away and I just swam from feed to feed. I never let myself consider getting on the boat, I honestly didn't want to return to do those first 4, 6 or 8 hours again, so I guess I’ll just keep swimming…

Going into my Ultimate World Triathlon I considered the English Channel would be the most difficult portion, and I prepared myself, my family, and my friends for the possibility of failure. When I jumped into the water on the evening of July 9th, I didn’t know if I would reach France. After 11 hours and 47 minutes in the chilly waters of the English Channel, I stepped onto the French shoreline–exhausted, elated, and delirious. I had done it. The memory is so vivid and blurred at the same time. There was no champagne or pate waiting for me at 4:15am in France, but I had done it! I’m still trying to reflect on the whole thing, and I imagine I will be for some time. I’m now preparing the third leg of my ‘Ultimate World Triathlon’, my bike across America. But first, I get to undertake my biggest challenge; I’m marrying my lifetime adventure partner, Caroline Gleich on August 10th, 2019. I guess this is a quadrathlon! As it turned out, it will all happen in less than 6 months... if she says ‘yes’ and I can pull off the bike ride!

In September [2019], I start my bike ride from Seattle to Nantucket which will be over 4000 miles. I’m cautiously optimistic that I can complete the ride and the last leg of this amazing adventure. Maybe after this, I’ll have some normalcy and be able to get back to my day job selling residential real estate in my hometown of Park City? Yeah, I think normalcy and ‘just getting back to my real job’ is unlikely too! But this Triathlon has a greater purpose too: to talk about gender equality.

When Caroline and I summited Everest, she became one of the 11% of women represented in Everest summits. That 11% is a common figure in these types of sports, but it also translates into the workplace and boardrooms around the world. Roughly 10% of Fortune 500 companies are led by women. I know that’s not representative of what women bring to the table and I want to see more women on the top, whether that be a mountain top or leading a company. I also don’t think it’s just a woman’s job to fight for this equality and representation. I think men are in integral part of the conversation and I want to hear them use their voices. Let’s have these conversations and make this a better world for our mothers, daughters, co-workers, friends and neighbors.

You can follow the rest of my journey on my Instagram @Rob.Lea. And more importantly, you can take part in the conversations about gender equality with me using the hashtags #ClimbForEquality and #TriForEquality.