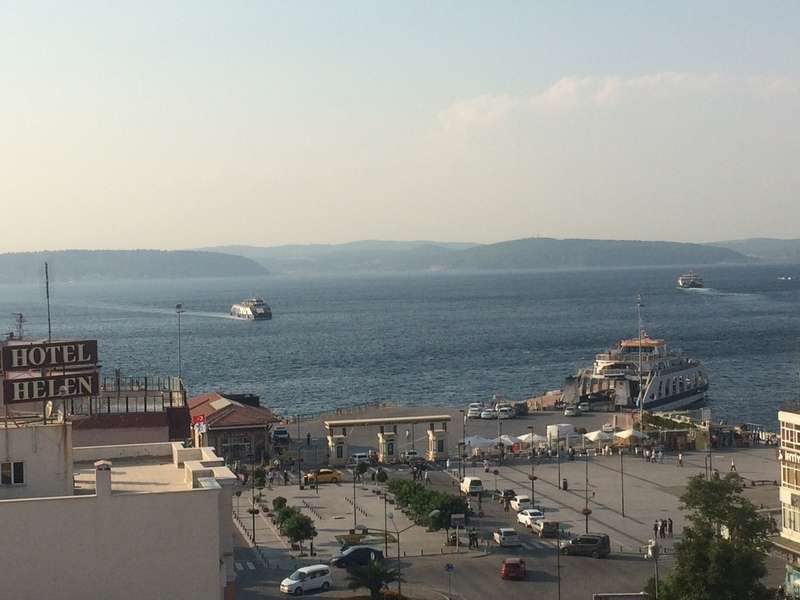 Why did the Irishman swim the Dardanelles?

You will have to read a bit further to get the answer to that question. I was first attracted to the Hellespont swim a number of years ago. The reasons were many – the story of Leander swimming every night to visit his beloved Hero, the first successful attempt to swim it by Lord Bryon in 1810, the historical importance of the Dardanelles Straits right up to the present day and the challenge of crossing a busy shipping channel within a time limit while dealing with a strong current.

While childhood summer holidays spent on the West coast of Ireland meant I was comfortable swimming in the open sea, it always seemed a mystery to me how people were physically and mentally able to swim long distances in the sea. As a result swims such as the Hellespont slipped down the “to do” list.

This changed after a car accident a number of years ago. My physiotherapy required daily swimming sessions but I soon got bored of swimming laps. I realised that it would be hard to sustain my recovery unless I had a measurable goal. Then I saw an advertisement for SwimTrek’s Introduction to Open Water swimming trip. The main pre-condition to join was to be able to swim 1km in the open water. This was a perfect solution – build my endurance to meet the target and get a holiday into the bargain.

The week exceeded all expectations – relaxing location, challenging swims, great organisation and the joy of being in the company of my fellow swimmers. However the biggest benefit was the coaching from the guides – they were able to show how my efforts in the water were being undermined by poor technique. Through video analysis and simple drills I was able to swim more relaxed and go further with less effort. It was like a magician taking you backstage to show you how their tricks worked – eureka!

I continued with my pool swimming and participated in some open water swims. Two further trips to Mallorca were as successful as my first. I continued to improve with coaching from each set of guides. My thoughts drifted to attempting the Hellespont but my next trip was to Crete. The trip was highly enjoyable but talking to both the guides and my fellow SwimTrekkers highlighted what it took to swim well in an open water environment. It gave me food for thought.

I signed up for the Hellespont but realised I needed to be more committed and focused in my preparation. Using training tips from my previous SwimTrek experiences, the trip notes and assistance from other sources, I worked to a programme that increased my time in the pool and brought greater variety to my training.

Fast forward to August 2016 and the bus transfer to our hotels in Canakkale which lies on the Asian side of the Dardanelles. We got our first view of the crossing that evening on the ferry. The tour guide explained the swim by reference to some sighting points on the Asian side – the radio mast, the large Turkish flag and the floodlights at the local stadium. As we crossed in the twilight I began to wonder what the fuss was about – “Mast, flag, floodlights, job done.” – as easy as 1-2-3.

Any complacency was removed the following morning. The breakfast room in our hotel was on the top storey and had a panoramic view of the strait. Europe looked so……… far away. The breezy optimism of the previous night slipped away. The evident strength of the current and dog legged track of the swim started to create doubts. Breakfast was spent trying to find ways to mentally reduce the task ahead but none really worked. It felt as if we were deluding ourselves. Then SwimTrekker Alan announced the mantra “Europe, Asia, Just Do It!” That seemed to fit the occasion – a realistic assessment of the task ahead, blended with a bit of can-do attitude and confidence that came from the fact that we had all prepared for it to some extent.

The acclimatisation swim after breakfast was the perfect antidote to the rising tension. It allowed us to get a feel for the water and to shake off the effects of the journey. This was followed by an orientation trip of the course on board a private ferry. Initially it felt like a pleasant boat trip but minds focused once the briefing started. The ferry sailed to the European side and passed by the start. As we returned to Canakkale we were given suggested sighting points which we could use depending on how we wished to swim the race. The main message was “don’t aim for the finish until you are at it”! After the ferry trip we went to official registration and then had a free afternoon. I acted in the finest traditions of open water swimming by checking out the local ice cream parlours and fortified myself for next day. It was an early start on race day as we gathered at the naval museum at 8.15am. The meeting area was filled with swimmers preparing themselves for the race by applying sunscreen, vaseline and doing warm up exercises. The atmosphere reflected the attitudes and goals of each one of the c.450 participants – some “in it to win it”, some aiming to finish to complete a personal challenge, others hoping to secure the bragging rights amongst the friends they were swimming with. The background noise was a combination of the usual pre-race playlists, nervous chatter spliced with announcements from the organisers. In short plenty of sensory stimulants to feed whatever thoughts were already racing through the mind – “Europe, Asia, Just Do It!”

We boarded the ferry in our swimsuits. As the ferry crossed to Europe, it more resembled a fishing boat than a passenger ship – its decks jammed with creatures dressed for the water rather than the land, shimmering and glistening in the sunlight, flicking around with energy, just waiting to be cast back into the sea.

A short walk saw us gathered at the start line. We knew the start time was close when a cargo ship gave us an encouraging blast of its ship’s horn – it was the last vessel permitted to make its way down the shipping channel before the race began. Just before the start we were witnesses to the inspiring sight of a number of swimmers who had lost limbs starting the race – in the true spirit of swimming from Europe to Asia.

After the appropriate sign, we crossed the start line with varying degrees of urgency. Each headed in a slightly different direction depending on how they were going to manage the effect of the current. The competitive swimmers headed directly for Canakkale with most heading towards the radio mast on the Asian side. Very soon the entire group separated into an arrowhead shape with the swimmers having a protective flotilla of boats and other craft ahead of them.

The swim itself was a blur. For me the first 20 minutes were a mixture of sighting so that I was heading in the right direction, focusing on my technique so that I swam steady and relaxed while watching out for other swimmers as they established their racing line. By then I’d burned my nervous energy and had settled into the rhythm of my stroke. I kept swimming until I thought it was time to turn towards Canakkale in order to catch the current to the finish line. In between focusing on my stroke and monitoring my position, I let my mind drift to the journey I’d taken to bring me to this place at this point in time – my holidays in Ireland, the SwimTrek trips, the progress I’d made in improving my technique and endurance. I realised that I should stop to take in the experience of being in the middle of the Dardanelles Straits with no risk of being run over by a ship. It will be a long treasured memory. Eventually reality knocks on the door to remind you that there is a race to swim - “Europe, Asia, Just Do It!”

The time came to make the turn towards the finishing line and at this stage local fishermen were offering encouragement. As I passed the quay beside the beach where we were to finish I knew that I had managed the current correctly. The release of energy from the sense of relief allowed me to increase my pace as I swam towards the line. I stumbled with excitement as my feet touched the sand and I climbed the slip way to get my finishers medal. I’d done the race in about 70 minutes, well within the cut-off time. The sense of achievement was enormous – I’d finally done it.

The medal ceremonies took place in the afternoon where we were able to applaud the medal winners in each age category – including a number of SwimTrekkers. That evening we reconvened for a well-earned farewell dinner. My flight from Canakkale to Istanbul the following morning took me parallel to the Dardanelles and put what I swam into perspective. I allowed myself a smug smile and basked in the sense of satisfaction with what I’d done.

To those reading this who are considering doing the Hellespont, my advice is just do it. It is very achievable despite the cut-off time, the distance and its reputation - provided you prepare for it. Various race distances (3.5, 4.5 and 6kms) quoted online added uncertainty to my assessment of whether I could do it within the time allowed. However I found the advice and race notes from SwimTrek to be accurate and helpful in terms of preparation.

An additional satisfaction to the trip was the number of local people who came up to thank us for visiting Turkey. It has been a difficult year for the tourism industry there so people were very appreciative of the efforts that were made by visitors to come. It felt good to make a small contribution and overall I found Canakkale to be safe and its people very friendly and welcoming.

So why DID the Irishman swim the Dardanelles? – because he realised ferries are for wimps! Joking aside, the longer answer was to go on an amazing journey to develop my swimming. In doing so I met fun and inspiring people along the way. So a big thanks to everyone at SwimTrek and my fellow swimmers for helping me to swim this classic race and open the wider swimming world to me. 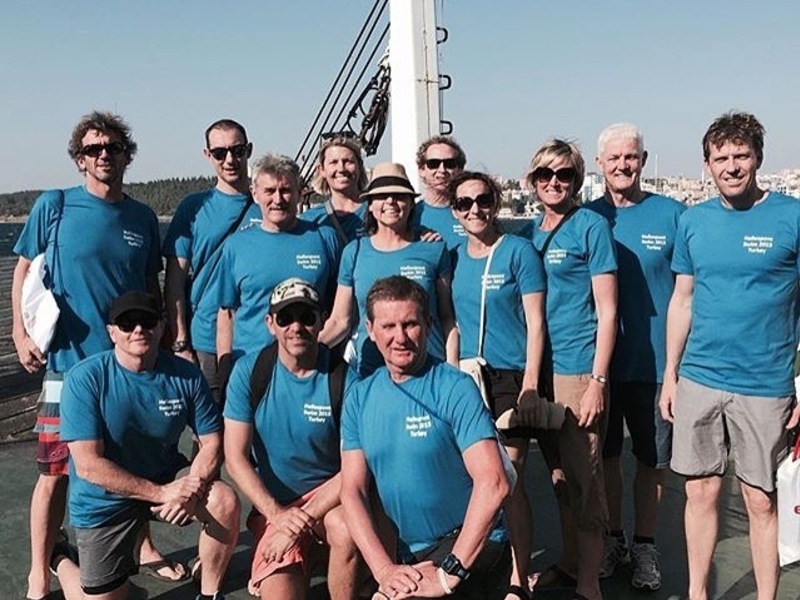 By Michelle Massy, almost 6 years ago
Approximately 4yrs ago our coach of Langlands Masters started talking about The SwimTrek Darndanelles, a few doubts and question, could we can we, could we make the swim distance could we organise to get to Turkey?? So we did, waited till midnight in Feb 2015 and we all signed up to swim! 13 in... 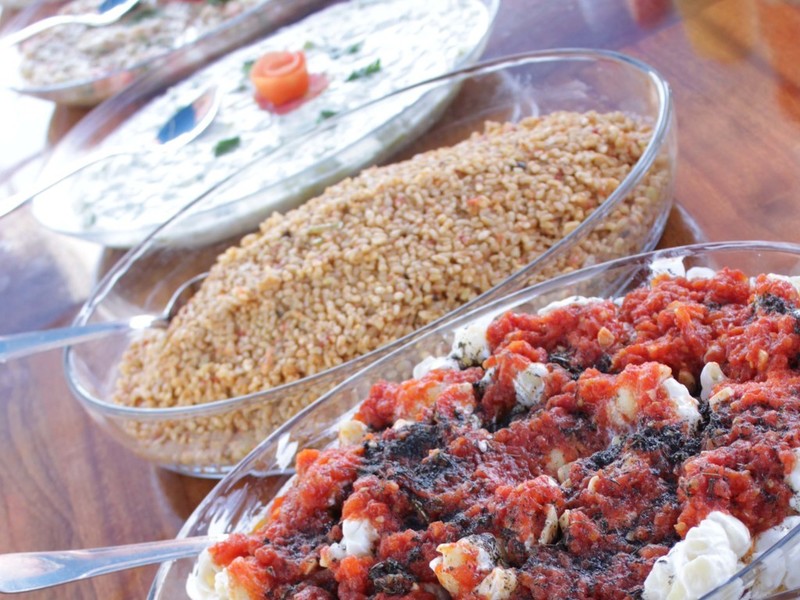 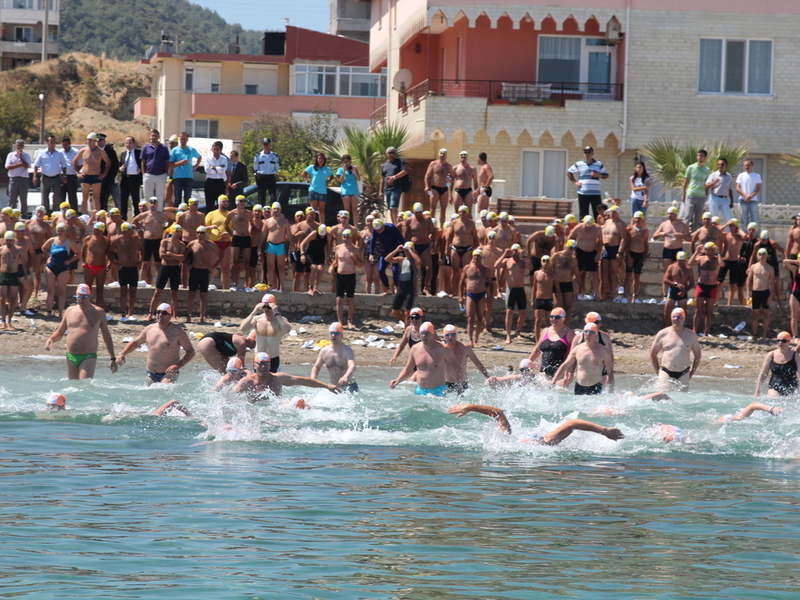 By SwimTrek Team, over 10 years ago
I received an email yesterday from one of our guests, Rene Geskes who has signed up with a group of 11 swimmers for our 2011 Hellespont tour where we swim from Europe to Asia. What makes Rene and his fellow travellers remarkable is that they are hoping to raise an incredible 50,000 for charity in...