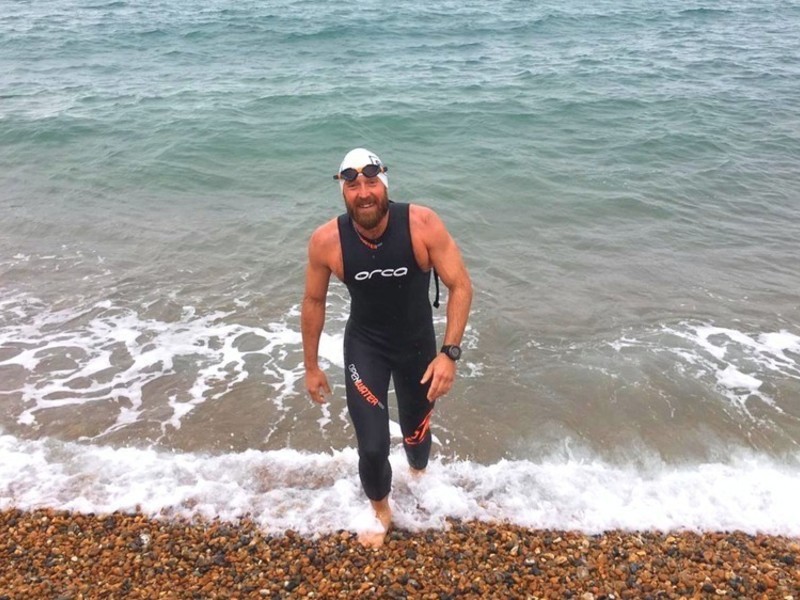 Before we shrivel into swim-deprived Lockdown prunes, we thought we'd get the swim wheels turning again. In this interview, we chat to long-time guide and all-round Man of the Ocean, Ricky, at his home in Brighton...

Ricky has spent 10 years as a guide at SwimTrek. He's seen almost every different kind of treasure a trip could dredge-up. He's guided on many of our most distant and exotic destinations, including Mexico and the Galapagos Islands. He can usually be found tailing manta rays or descending into caves and caverns, putting his freediving skills to the test.

In his youth, Ricky swam competitively for Romford Town Swimming Club and still drops into the Masters sessions, when he has a few days back home. During this past decade, Ricky has struck a healthy combination between his travels and work and picked up a variety of jobs along the way, from divemaster to deckhand. In 2015, Ricky also joined the first group of swimmers to dive into the Ionian Sea and cross the 10.5km distance between Corfu and mainland Greece, for Sail4cancer. In 2017, Ricky also swam in a duo for 20kms the whole length of Oman’s Kohr Asham.

So, here goes - let's reach out to the English beachfront and check in on the man himself: 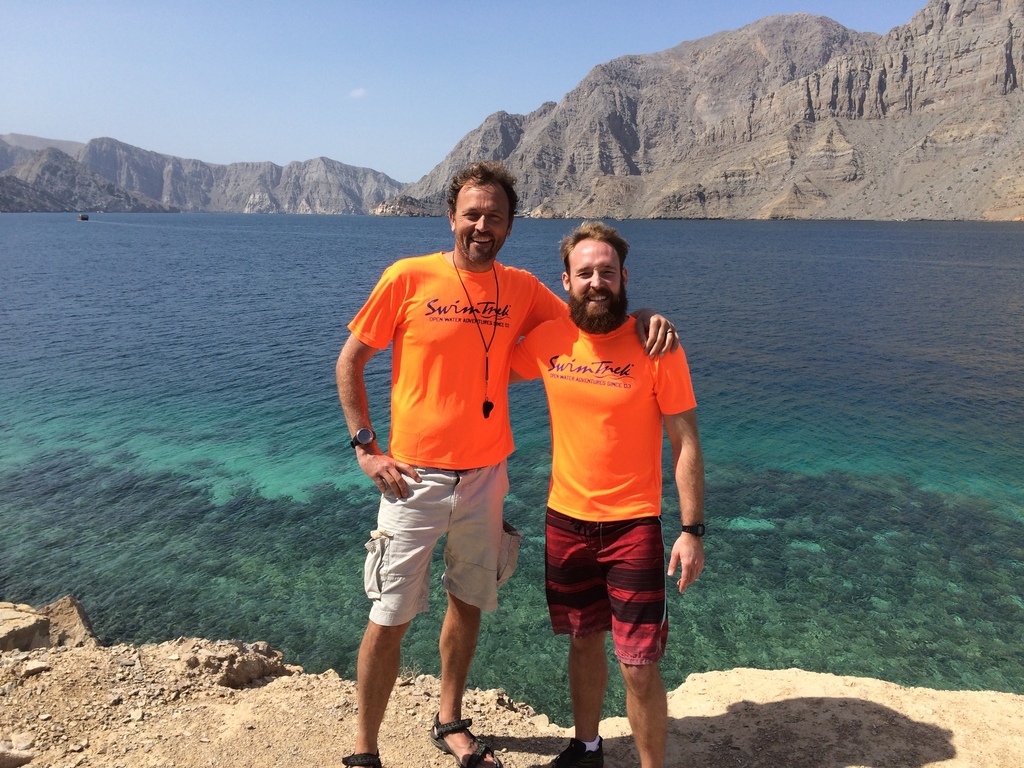 SwimTrek: How are you doing Ricky? Are you still able to swim at the moment?

Ricky: It's a strange time. Very strange. My housemate and me have set ourselves a challenge of going in every day in January. Whether that’s 5 minutes or 20 minutes – you know, it depends on the day. We're yeah – we're still getting in. Our closest point is Brighton Pier, which is a popular spot so there’s always someone there at about 8 in the morning. It’s around 7 degrees at the moment, so it's pretty cold. 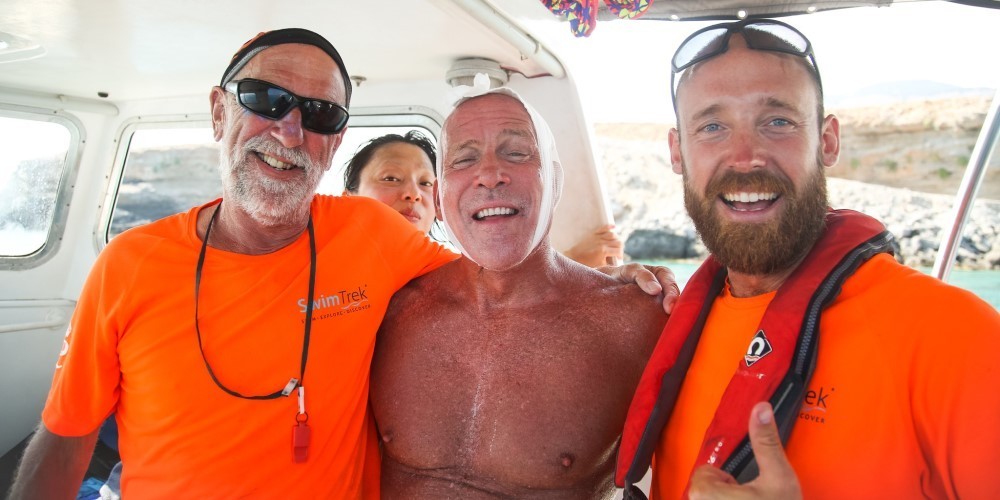 SwimTrek: First up – how long have you been a guide at SwimTrek?

Ricky: This will be year 10. I started in 2012 and did about 3 weeks in the Cyclades. It was a fantastic time. And you know, why would you want to do anything else? I kind of stayed ever since. I remember the next season going about 10 weeks back-to-back in the same location and then going out to Turkey for about 12 weeks as well. Once they started opening up more winter destinations, I was able to go the whole year through. We did two trips in the Greek Sporades between Lockdowns and two in Milos. 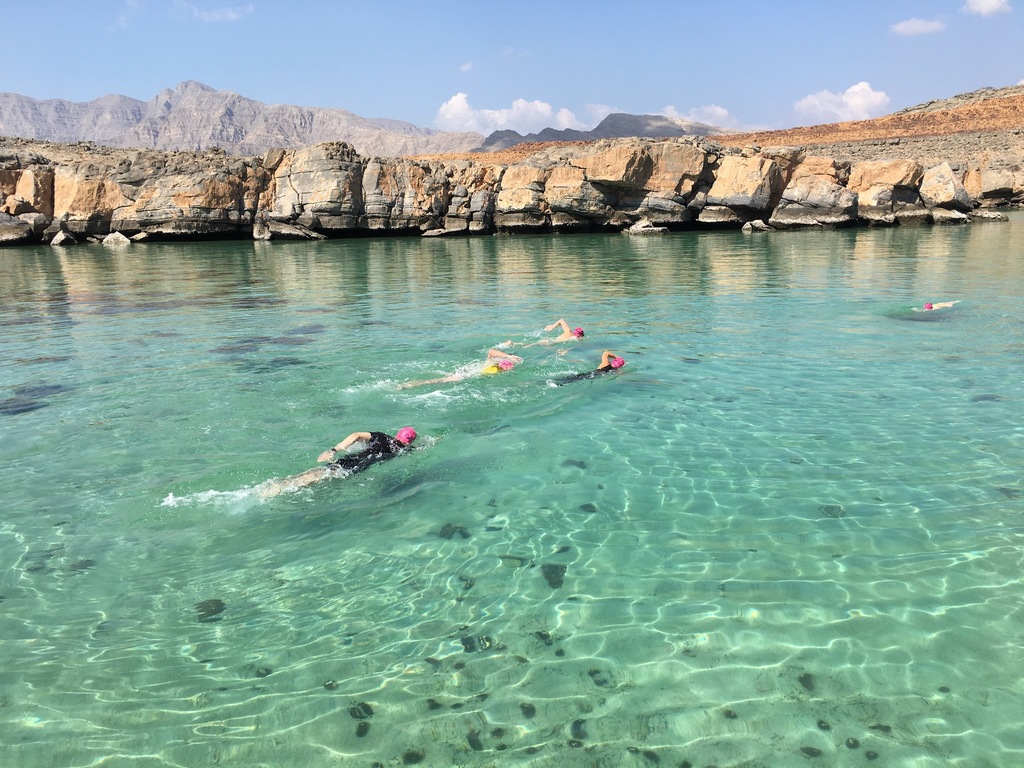 SwimTrek: So, for you Ricky, what’s the best thing about being a guide?

Ricky: The water. I know it might be a bit of a cop-out saying that, but you wouldn’t do the job otherwise. I’ve always had a bit of a thing for exploration as well. So, making it to some of the new locations – finding swims and discovering new places and really knowing the nooks and crannies of the coastline. I really enjoy that side of it and I suppose relaying that information to the guests as they're doing it – but, yeah, I definitely get something out of them sharing their experiences and the local knowledge of the area. Over the years things have changed. So, I've been guiding for 10 years and I suppose going back, with a different hat on every time, and finding new parts of the same area has been a bit of an obsession too. I started freediving about five years ago. So, you kind of go back and see the same swim in a totally different way. Now you’re looking for those hidden areas and caves underwater and other secret finds, like the sunken aeroplanes on the Lycian Way. And it doesn’t take much to put a bit of practice into your equalisation and just to be able to go down 1-3 metres adds great value to your trip.

SwimTrek: And from all your trips, what’s been the biggest surprise?

Ricky: The biggest surprise was on my third SwimTrek – I can still remember it quite vividly now – there was a chap called Michael and it was his birthday. We were doing a crossing from the Greek island of Keros, which is notoriously cursed, and no civilisation has ever been able to settle there. Anyway, because it was Michael’s birthday, his partner Suzanne decided to drop a group and swim with him. We were all singing ‘Happy Birthday’ to him as we went. Then as soon as we finished the swim, he got out and he just said – “She just said yes.” He’d asked her to marry him and he had the ring down his trunks.

'...as soon as we finished the swim, he got out and he just said – “She just said yes.” He’d asked her to marry him and he had the ring down his trunks' 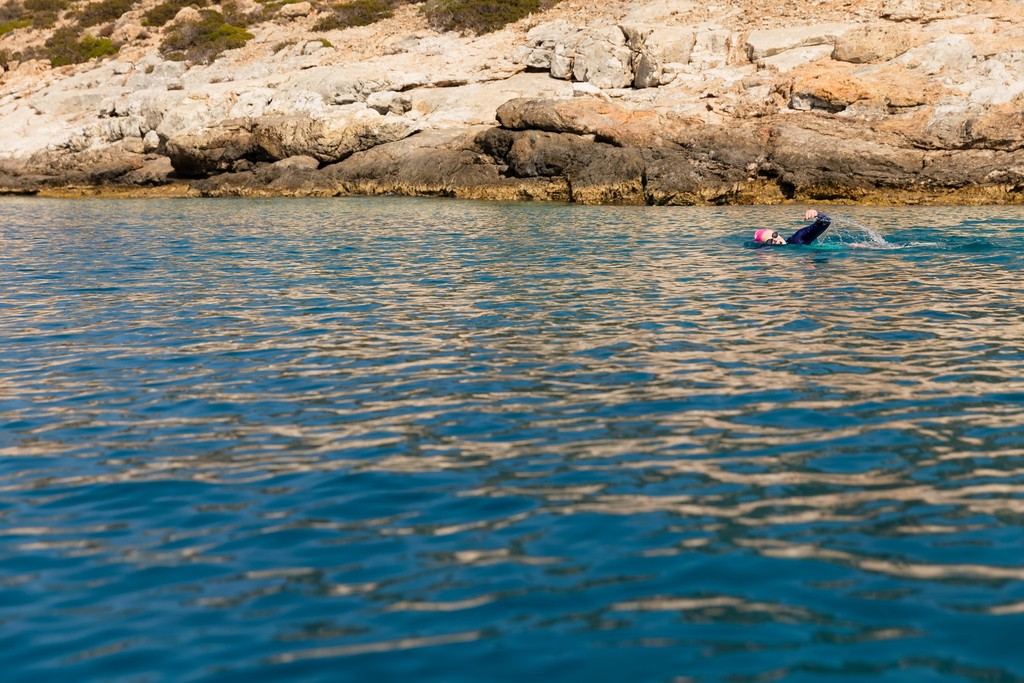 SwimTrek: Brilliant! That’s brave stashing the ring in your trunks.

Ricky: I know. I’m not sure it was the official ring, but we were all really happy, sort of radioing between boats, and there was a big celebration after.

SwimTrek: Amazing – so, what has been your most memorable swim in open water?

Ricky: Our Oman SwimTrek is one of the winter trips we do and it’s quite remote and in the middle of nowhere. I’ve been a few years running and someone suggested: “Why don't you swim the full length of the khor?” Khors are like big fjords. So, I went over a week early and got one of the other guides, John, to assist the swim and hired a boat and managed to swim the 20km length of the khor. And yeah, it’s stunning, you know? It has mountains dropping right into the sea. The landscape is really barren as well, weaving your way along the coast – well, they’re not really jellyfish, they don’t sting, but there’s some jelly like thing you’re going through. I was swimming with a chap I’d met on the Channel Training Camp and he’d flown over for it. We managed to swim in tandem. We were lucky – his stroke rate matched mine for the full 20km. I just have a very nice memory of it. The 6 hours went very quickly. We bumped into some dolphins about half-way through. Then the wind really put on a show at the end – it was a headwind coming towards us and the waves kicked up and made it a bit exciting. I knew I was looking forward to a curry too when I got off the boat. So, you know? You can swim as hard as you like an you’ve got that little carrot dangling ahead of you.

SwimTrek: That definitely helps! What about your best encounter with wildlife?

Ricky: I also swam a crossing between the Yasawa Islands in Fiji, I saw a few leopard sharks and manta rays – I had a fantastic experience with a manta ray. I’d just got these newly acquired snorkelling skills and I was able to spend a bit of time with this manta ray underwater. Any time that nature takes 5 minutes out to play is really special. Just to be able to hold my breath a bit I was able to play and interact too. They’re very big and very fast and it seemed playful – I’d like to think it was playful, and not just feeding on the plankton. 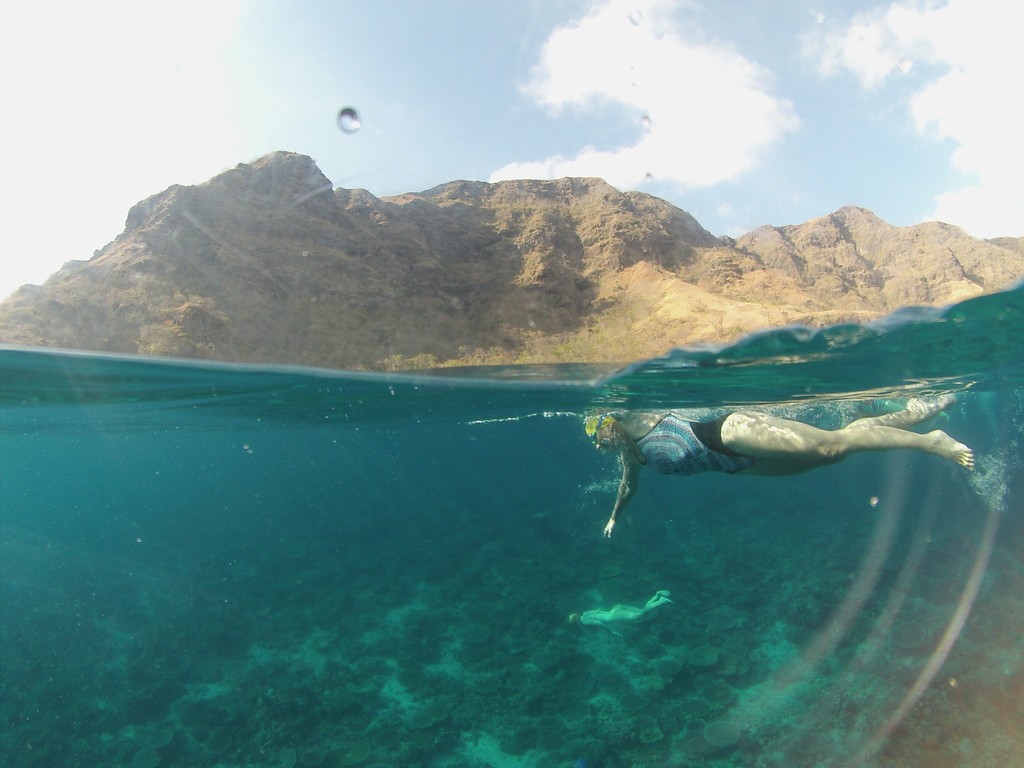 SwimTrek: If you could teleport to any swim spot right now, in Lockdown, where would you go?

Ricky: That’s tricky. Anywhere in the world, right now? I'm still chipping away at the opportunity to go to Raja Ampat, in Indonesia. To swim it would be fantastic. We had a trip in Komodo and I remember the local dive guides on the boat started working with us swim guides, to see what we do. They were quite shocked by how much wildlife you actually see by swimming and just skating across the top of the water. You know? The turtles coming up and the actual amount you see. I could imagine in Raja Ampat it would be quite similar. I hear that they have a fantastic ecosystem, healthy coral and even more wildlife. So, yeah, that one would be a good one.

SwimTrek: Has anyone you met ever seen a swimming komodo dragon, around there?

Ricky: Right, I’d heard, locals told me, that they can swim and that they’re pretty fast as well. But I didn’t see one. The ones that we did see were either sleeping or feeding. They’re impressive beasts. 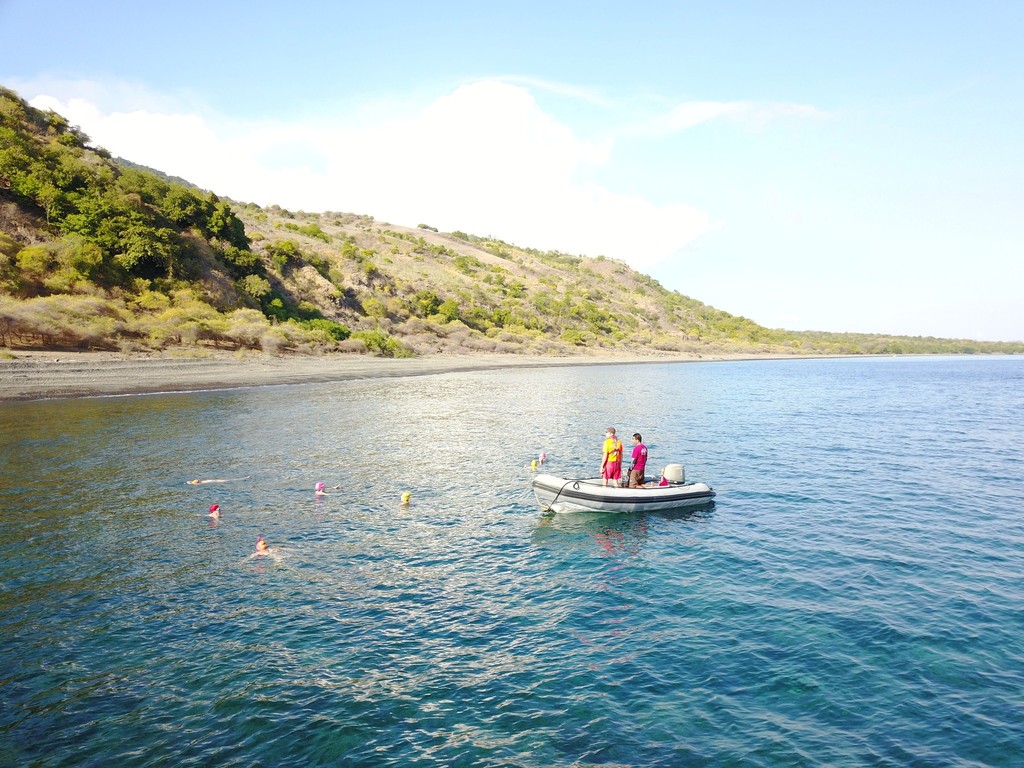 SwimTrek: What’s your favourite post-swim food? Curry is one that's come up.

Ricky: Yeah, you got that one. I suppose it depends on location. In Brighton, coffee and oat cakes is working. If I were to go fancy on this one, in the Greek Islands they do these really nice zucchini fritters at the local tavernas.

SwimTrek: Wow, they sound good – have you got a favourite book or a film about swimming?

Ricky: I suppose, for motivation, I remember being around 14 and I watched Luc Besson’s Le Grand Bleu. It was a film about freediving actually based in Amorgos, in Greece, which is very close to where we do our Cyclades trip. I just remember being the only person left awake at the end of the film – it’s a pretty long one! It definitely instilled a passion for going deep and looking at the underwater world and experiencing life down there. And yeah, that had quite a big impact and I think again another reason why I'm doing what I'm doing now. For books, I’d probably say Deep by James Nestor. There’s a lot of research in there about cold-water shock and the mammalian diving reflex and the physiological effect the water has on your body. The book covers many of the other things that sea mammals have in common. So yeah, it's a really good read. 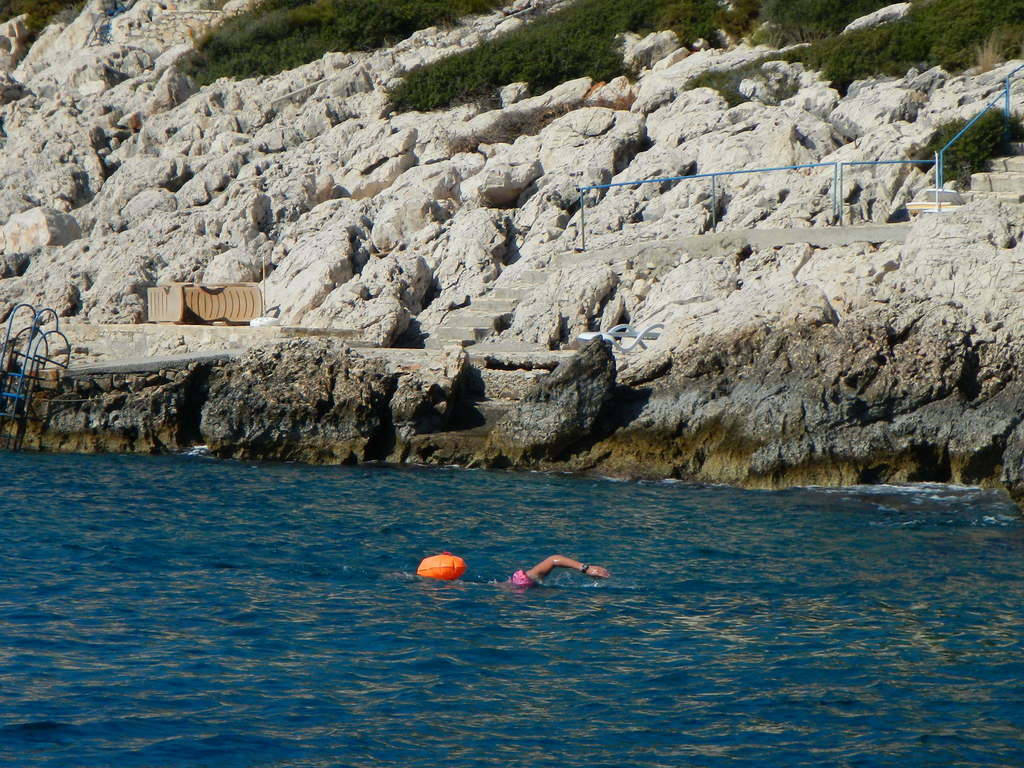 SwimTrek: Finally, what’s the best swim advice you’ve ever been given?

Ricky: So, I had my competitive phase when I was younger. I think back then it was a bit like: ‘just swim harder and you’ll get faster’. And that works when you're young. Then, in my 20s, I read about a technique to imagine you're swimming downhill. The idea is to get your chest slightly further in the water and swimming as though you’re on a slight downhill gradient. So, if you're someone with particularly sinky legs, this is worth trying. It’s quite hard to know if it’s working or not when you first start doing it. It’s hard to achieve without your head being out of place as well. A lot of people when they adjust their body position will say 'get your head down in the water' - if your head is further down your legs will come up. Imagine what that is doing to your spine though, if your neck is bending. What you really want is the whole front of the body to come down. By giving yourself a visualization of swimming on this slight downhill gradient, you kind of feel that the brakes come off a bit.

Visit the SwimTrek Coaching website if you'd like to learn more about perfecting your swim technique, or to book a session with one of our expert analysts.

Big thanks to Ricky for chatting to us! Head now to the SwimTrek blog for more weekly Features, Interviews and News updates... 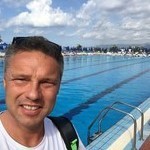 Very nice reading about Ricky. Have been on 3 swimtreks in the past where I was lucky having him as our Swimtrek guide. Hope to cu again on future swimtreks. Cheers and stay healty Thomas p.s. I like your comment about swimming downhill. will work on that. 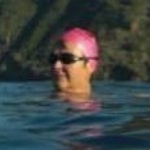 Lovely to read this Ricky! Hooray for your wonderful guiding on Kornati and Milos. Oh how I missed my SwimTrek "fix" last year! But plans are developing to make up for it. Cheers Daphne