Brighton-based SwimTrek HQ caught wind of this exciting independent film project - Vindication Swim. And we reached out to lead actress Kirsten Callaghan to find out more about her portrayal of the first female British swimmer to cross the English Channel...

Production on Vindication Swim is set to resume in Spring 2021, after it was brought to an abrupt halt by Covid restrictions, like so many other films. The exciting new indie film is led by young director, editor and writer, Elliott Hasler - an unstoppable Brighton native, described by Culture Trip as ‘the next Spielberg’. Hasler has created a number of short films that were widely praised, including To Hunt a Tiger which premiered at Soneva Jani’s open air cinema in the Maldives in 2019. 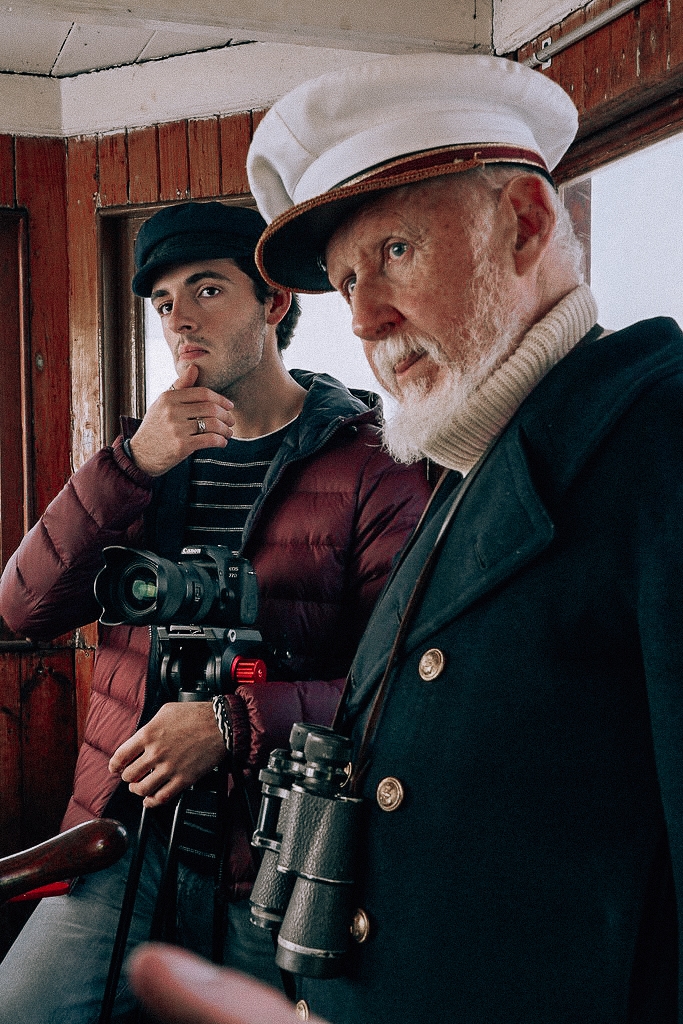 At the heart of the film is the story of Mercedes Gleitze - a Brighton swimmer so iconic she even has her own Rolex watch named after her. Among Gleitze's most notable feats is an inspirational swim across the English Channel - she was actually the first female British swimmer to cross the Channel! She was also the first person to swim the slightly warmer Straits of Gibraltar. This film will focus on Gleitze's English Channel crossing, when she battled cold waters, currents and jellyfish, backed by troubled coach Harold Best. It was a swim that served as a friendly two fingers to the furrowed-brows of 1920s patriarchal society and the looming eyes of the media. Yet it also attracted rival claims and Gleitze was forced to accomplish the same feat again to retain her record.

We chatted to another native Brightonian - lead actress Kirsten Callaghan (2016 finalist for the My RØDE Reel Best Actor Award – the world’s largest short film competition) to find out how she found the open water and to learn a little more about her role as the inspiring endurance swimmer, Mercedes Gleitze: 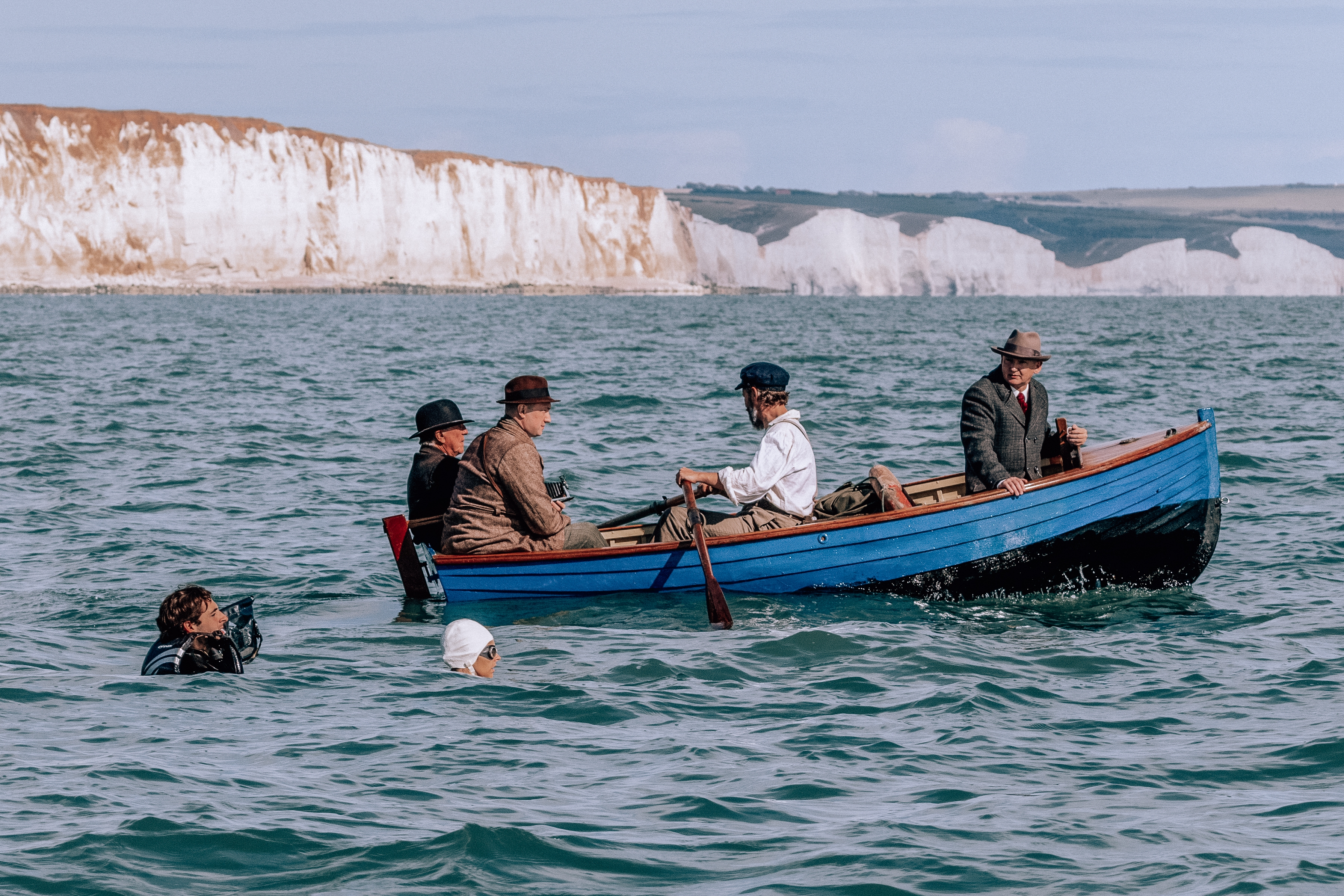 Vindication Swim is an ambitious indie-film project. It looks really exciting - how has the experience been in production so far?

Kirsten: "The production has been very ambitious for a small independent film company. As a team, we work very hard to make sure that no part in the making of Vindication Swim is overlooked. We have managed to source original 1920s costumes and props, and all of the locations are built on reference photographs from the era. We also spend a lot of time researching into the historical and social context of the period, which has included gathering all of the original newspaper articles that Mercedes Gleitze was featured in at the time. It has been the most exhausting and rewarding production I have ever been a part of. Out of all of the locations, it is always when we are filming in the English Channel that I’m reminded how unique and extraordinary this project is."

'It has been the most exhausting and rewarding production I have ever been a part of...' 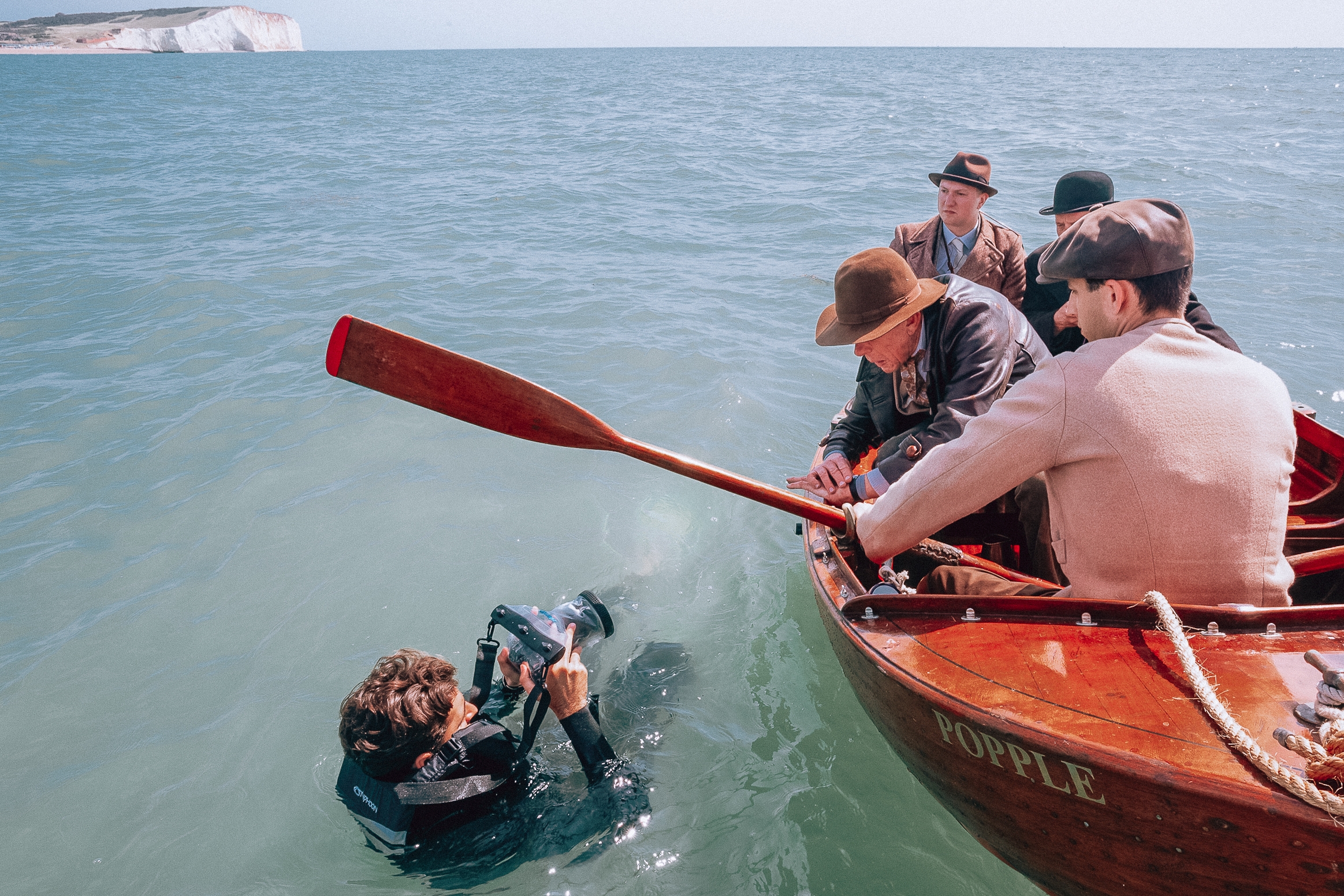 Mercedes Gleitze is a very iconic British swimmer, what do you think was her motivation for wanting to cross the English Channel?

Kirsten: "One of my favourite quotes by Mercedes is 'I passionately love the sea; nothing else moves me as it does. I love and understand its every mood; and I sometimes fancy that the sea knows and understands me, too.' Mercedes had such a deep connection to the sea and when I read about her and her diary extracts it feels as if she was born to swim. Mercedes had equal levels of respect and fearlessness of the water. The sea was a place she could be free and excel. As well as her embedded desire to be recognised as a swimmer, another big motivation for Mercedes was that the prize money from her swims would enable her to help the homeless. Mercedes had developed a deep empathy for the poverty-stricken after being exposed to the extreme levels in London when she was working as a typist. Mercedes virtually gave everything she owned away, using her funds to build and run a homeless shelter in Leicester."

We heard you did a lot of your own swimming for the role - how did you enjoy the open water?

Kirsten: "I trained for three months before we started shooting Vindication Swim and have spent the last two years open water swimming. Whilst filming in the English Channel I have encountered sea-life, extreme weather conditions and icy temperatures. For me, there is nothing that connects you so deeply to nature as open-water swimming. I feel present in myself and in the world when I am swimming out in the sea. I plunge into escapism and survival-mode at the same time. Having had a teeny tiny taste of what Mercedes experienced out in those deep waters - it reinforces how remarkable she really was."

'For me, there is nothing that connects you so deeply to nature as open-water swimming...' 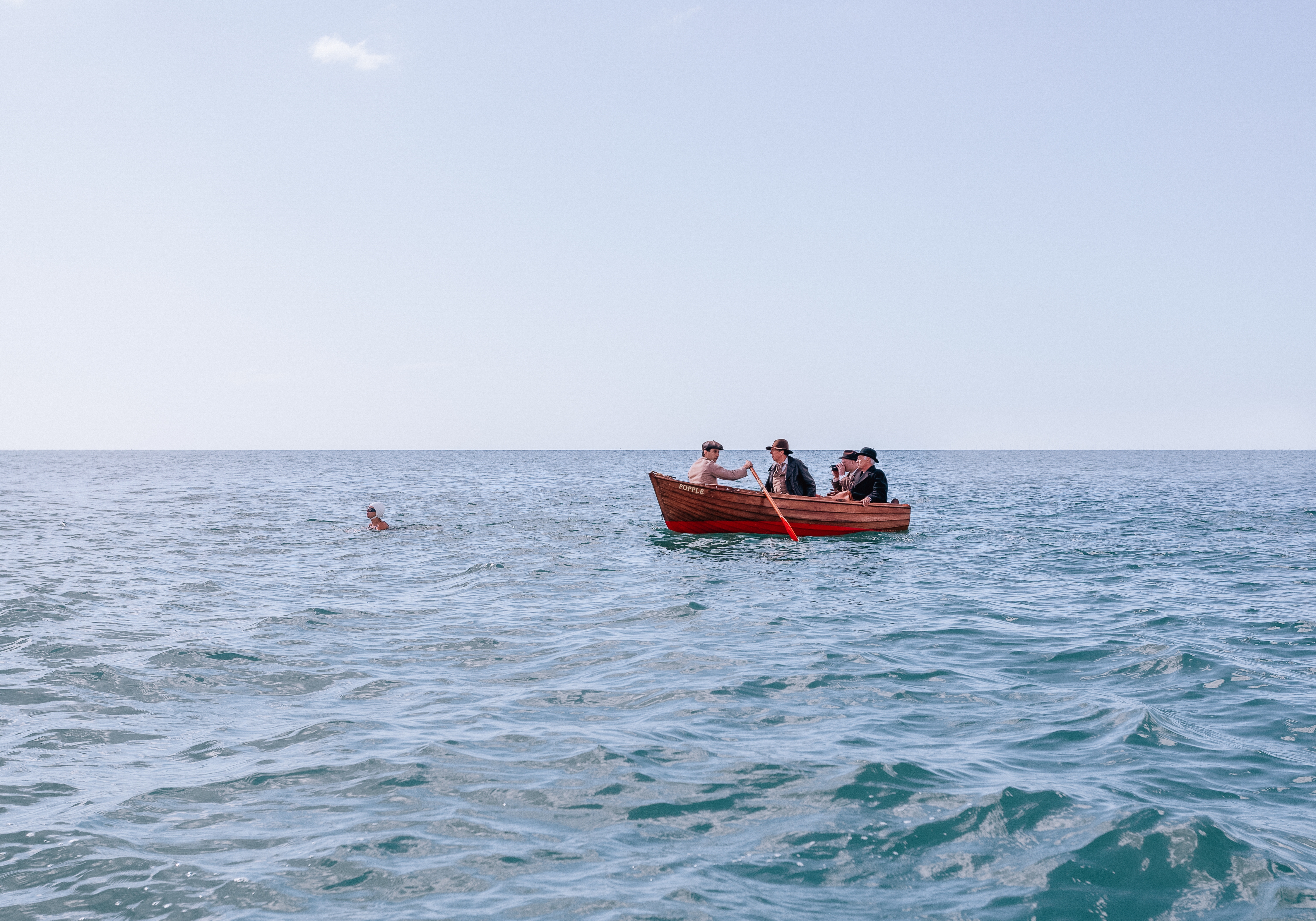 Did you get a sense of how different the experience must've been for Gleitze - without any of the modern gadgets, swim watches, etc...?

Kirsten: "Nowadays trainers have extensive knowledge on sports nutrition, boats have built-in GPS and we have mobile phones to stay connected to land. Mercedes and her crew would enter the water with a handful of ham sandwiches, tea and ambition in their hearts. The boatmen had no electricity and would also have to endure the cold temperatures and changing waters. In our film, Mercedes is accompanied by a group of men on a small, wooden rowing boat, which only has flares for light. There is an unimaginable level of risk for everyone involved in the crossing. Their vulnerability forces them to be collectively courageous and strong-willed as a group, otherwise they would fail before even leaving the shore-line."

In what way do you think Gleitze's story is still relevant to a modern audience?

Kirsten: "We live in an impatient world where people believe they’re failures if they don’t achieve overnight success. It took Mercedes eight attempts to swim the English Channel and whilst battling the elements she was also fighting against the disbelief expressed in the media about her abilities, which is our main focus in the film. When Mercedes decided she wanted to become an open water swimmer she wasn’t the ‘Muscle Mercedes’ she went on to be nicknamed by the media, but a London typist who was struggling with bouts of bronchitis. Mercedes’ self belief and dedication to swimming is a story of victory against all odds, which never fails to be inspirational, no matter what century you’re in. As a young woman myself in my 20s, Mercedes has taught me that whatever you choose to do in this life you must approach it with bravery, passion and perseverance. Most importantly, never lose faith in your own capabilities."

'Mercedes’ self belief and dedication to swimming is a story of victory against all odds, which never fails to be inspirational...' 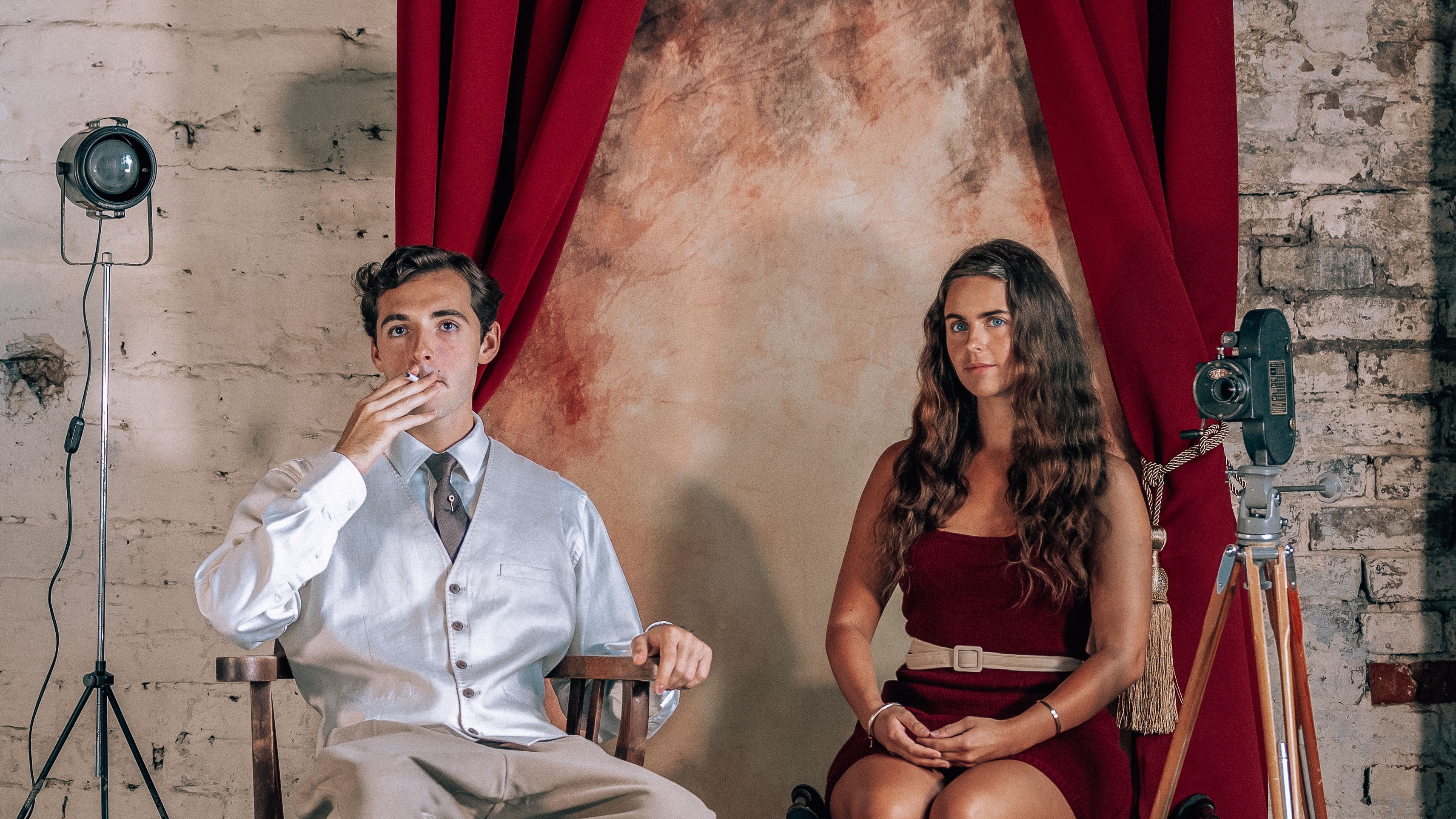 If you'd like to find out more about this upcoming film, head now to the Vindication Swim website...