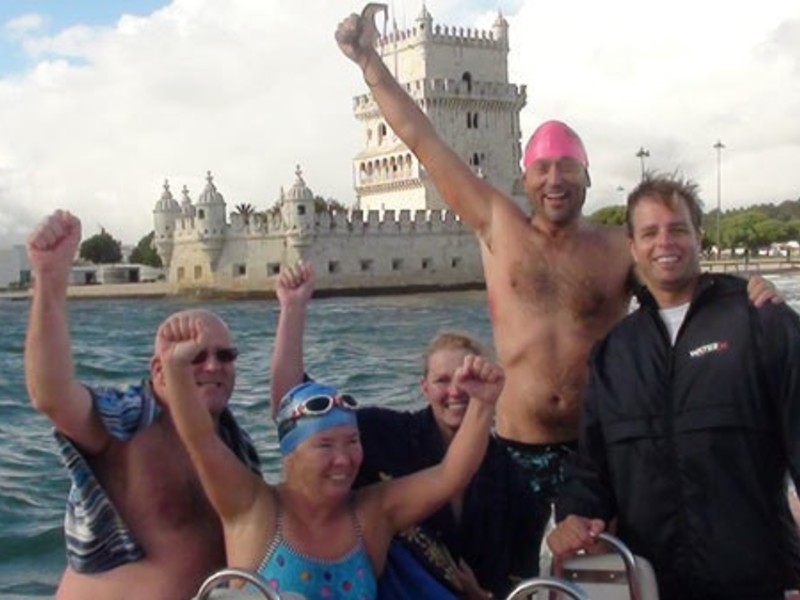 Swimming the River Tagus, Lisbon, Portugal in the Wake of Lord Byron

"I swim in the Tagus all across at once, and I rides on an ass or a mule, and swears Portuguese, and have got a diarrhoea and bites from the mosquitoes. But what of that? Comfort must not be expected by folks that go a pleasuring.” Lord Byron, 1809

So said the English poet Lord Byron after his successful crossing of the River Tagus in Lisbon, Portugal back in 1809. It was the first of Byron’s trilogy of classic open water swims, the others being the Hellespont and the Grand Canal of Venice. Since those days all of these stretches of water have seen a steep increase in marine traffic and significant organisation is required to now achieve these swims.

SwimTrek is already involved in keeping the memory of Byron’s epic swim across the Hellespont alive by hosting the 200th anniversary crossing back in 2010 and help run the annual Hellespont crossing on the 30th August each year.

On the 26th October 2012 SwimTrek’s founder, Simon Murie successfully swam across the River Tagus following Byron’s route and finishing at the Belem Tower on the river’s north shore. Simon was joined by his wife Lou Murie and Margy & Egg Sullivan, all keen and experienced open water swimmers.

The swim started in Porto Brandão, approximately 20 minutes before high tide and the water conditions were lumpy. The point to point distance from the Belem Tower is just over a mile but the distance travelled by the swimmers was around double that when the effects of the tide were taken into account.

The first part of the crossing took the swimmers towards the 25th of April Bridge commemorating the Carnation Revolution that ended years of military dictatorship in Portugal. On the second half of the crossing the swimmers passed “The Memorial to the Discoveries” a stone landmark featuring Portugal’s rich heritage of naval exploration through the centuries and finishing at Belem Tower.

If you fancy attempting this classical crossing then add your comments below or contact the SwimTrek team as we are hoping to offer this as part of a new trip for 2013, with more details to follow soon. In the meantime if you or a group of friends fancy this weekend adventure, we would be happy to arrange it for you.

Be the first of your friends to like this.

I completed the Hellespont in 2013, and I would be interested to take on the Tagus with Swimtrek. Marc (Amsterdam)