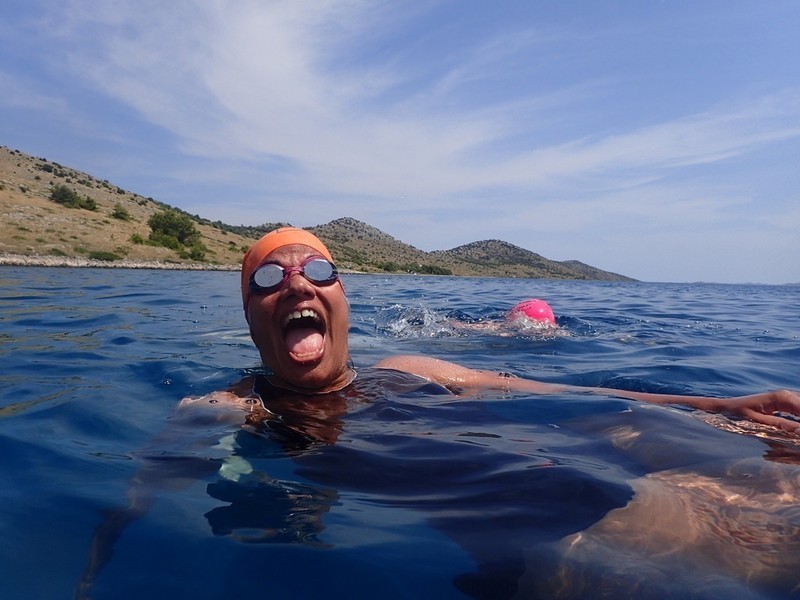 Jumping into the discomfort zone

As a child I hated swimming – I couldn’t seem to swim without swallowing half the pool and I remember my Dad finding me crying as I didn’t want to go to my lessons anymore. That coupled with a very sporty secondary school meant that I viewed myself as rubbish at all sport.

When I hit my thirties, I decided that I should do some form of exercise and I took up swimming, specifically because it is solitary and I wouldn’t have to compete in a team and embarrass myself in front of others. I still had a fear of putting my head under water which I did overcome after I heard the lovely [blind British adventurer] Miles Hilton-Barber speak and he said, “You waste more energy worrying about something than actually doing it” and just like that I put my head under the next day – what a waste of 20 years! By 2012, I was a regular, three-times-a-week pool swimmer and really enjoying it for the meditation and how it destressed me before work.

In 2014, my university friend, Catherine, said she was thinking of going on a SwimTrek holiday and asked if I would like to come. I had no idea that such a thing existed but I’m always up for hanging out with friends and so I agreed. Once I signed up, I was already daunted by the 12-week training plan which took me from 1km to 5km. Being very law-abiding, I diligently followed the plan and I have to say I was amazed that I managed to complete it even though I had never swum more than 1km. It turns out that a lot of other people are more relaxed than me and hadn’t been so conscientious with following the training plan but at least it meant that I was as prepared as I could be! Rosanna with guide Eoin on the Crete Discovery trip

My first SwimTrek trip was in the Greek Sporades. On the first day, we were split into speed groups and I was in the slowest group. I had that sinking feeling - I felt like I had regressed to school where I was never picked for the school teams. So, I had to give myself a reality check and remember that I don’t know many of my friends that could swim 5km a day! As it happens, I have been in the slow group for most of my trips and find it the most chilled out group which I’m happy to be in. While it was one of the scariest things I had ever done, I found the environment on the holiday so safe – not only did the guides look after our physical safety but the group as a whole was so supportive emotionally, whatever your ability. The sense of achievement at the end of the week was incredible and I was hooked. And doing an activity on holiday seemed to justify drinking the wine in the evening!

On my second trip in Croatia, one of my guides, Doug, spent a lot of time coaching me and continued to do so over email for several months after the trip. I came back from the trip inspired to have some swimming lessons. I realised that I could improve my swimming – it was a revelation. I had conditioned myself into thinking I was rubbish at all sport but now realised I could improve and more importantly wanted to improve, and it felt great.

I’ve now completed my sixth SwimTrek. I still have the fear every time I arrive and get in the water, but fear can be a good thing, as long as you embrace it. My mantra is “If it doesn’t challenge you, it won’t change you.” I pick up a tip each year on how to improve my swimming – I’ve been told I’m very malleable because I don’t remember anything from my childhood lessons! I love learning new things and continuing to improve each year. Enjoying the water on the Kornati Islands trip

And I’ve picked up people along the way too – I’m in touch with someone from each of my trips and I have gone full circle. I took up swimming because I like being on my own with my thoughts in the water and I still have that, but it’s now also become a huge social supportive circle for me. A bunch of my SwimTrek friends have done a 2-day Scilly Isles Challenge, a 6.5km in Cadaques and this year we’ll be doing the 14km Thames Marathon.

Through this whole process, I have learnt so much about myself.

I am much braver than I give myself credit for. Isn’t it funny how we are often much harder on ourselves than we would be if we were supporting a friend?

I realise that I am not alone with my fears and worries. It’s easy to think no-one else is worried but when you open up, you realise that others are often feeling it too and when you share those fears and are willing to be vulnerable, you form stronger friendships.

I know that I have the ability to rewrite my story – I don’t have to be defined by my childhood fear and hatred of sport.

It’s never been as scary as I thought it would be and the rewards of swimming in the open water are well worth taking the plunge for.

And it’s opened up a whole new world for me. I’m a happier, healthier and braver person for having open water swimming in my life.

Here’s to the next trip!


posted about 1 year ago

Great read Rosanna. So pleased you've been inspired to keep experiencing new adventures in your life. You inspire others with your have a go attitude, plus your personality of course . Cheers, Doug (Croatia guide)


posted about 1 year ago