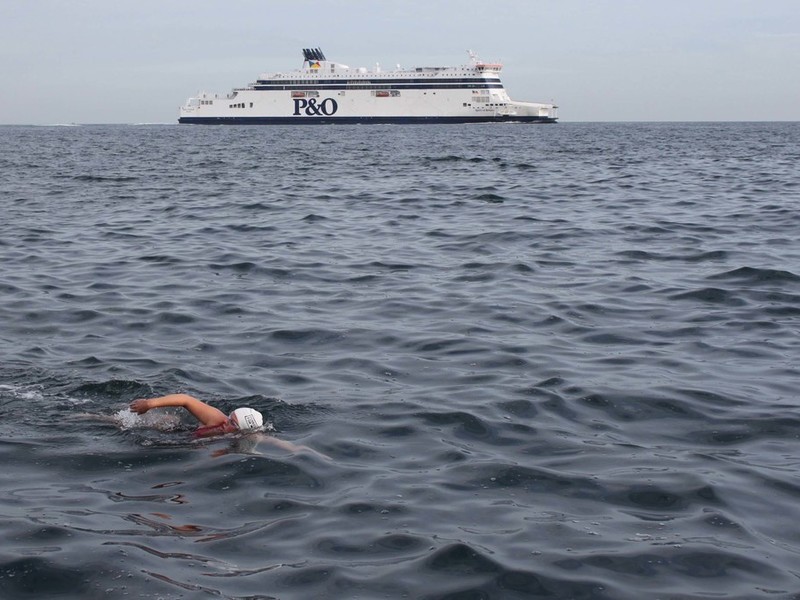 I did it! I swam from England to France on a beautiful sunny October day in 2014.

I had decided to go for it after crewing in mid-September on a Channel swim for a swimming buddy who I'd met on the SwimTrek long-distance training camp in April. The water temperature at the time was 18C and it was still 17.something at the end of September which is positively balmy for the Channel. I had to take the chance to swim at that water temperature, but on the flip side, I also knew I was under-trained and under-prepared as I had not had any intention of swimming the Channel that year. I had however done a few long swims during the summer, including the BLDSA Champion of Champions event in June, the length of Windermere in July and I had swum the length of 2 lakes (Lakes Thun and Brienz - a total of 31km) in Switzerland over 2 days in early September so I was certainly used to doing long swims. I had picked up a shoulder niggle during those Swiss swims (and in fact one of those swims was the worst 8 hours of my swimming life) but as it turned out, I certainly learnt a few lessons that weekend which I have no doubt helped me in the Channel. I am also bloody-minded so unless my body stopped being able to move forward through the water, I really was not getting out unless I needed to be pulled out.

I had no idea how long it would take me, I really wasn't bothered about time. Freda Streeter, aka 'The General', told me just to swim 'until your t*ts hit the sand'. Once I'd stopped laughing, I told her I would do exactly that. I had deliberately kept the news quiet as I worried about whether I was being a little reckless making such a late decision, but I took this thought with me - it's from Hugh Laurie, that well-known 'philosopher':

'It's a terrible thing I think in life to wait until you're ready. I have this feeling now that actually no one is ever ready to do anything. There is almost no such thing as ready. There is only now. And you may as well do it now. Generally speaking, now is as good a time as any.'

I was going to give it a go.

I went to work for the morning with the plan being to have a few hours sleep in the afternoon, get some pasta down me and then head to Dover. Well that plan didn’t work! At lunchtime, I headed home for a sleep but I was so mentally alert that I only managed a snooze for an hour at home and then an hour in the car on the way to Dover. And that is when I started to worry - about everything - ranging from my fear of feeling really lonely when swimming away from the boat to the start beach, to how would I deal with swimming in the dark, to being under-trained, to worrying about how little sleep I'd had, to whether my left shoulder would hang in there, to swimming into jellyfish. And the list went on. I knew for me I was right not to have been focusing on 'Swimming. The. Channel.' for the last year or so because I would have just worried about everything the entire time. This way, I only worried for about 24 hours!

Once at Dover, my support crew - my cousin Jenny who can organise for Britain, and 2 successful Channel swimmers - Simon, the owner of SwimTrek, and James, the aforementioned newbie Channel swimmer - went through my feeding plan and more importantly the crew food box! The time spent waiting to board the boat was the time I felt absolutely sick with nerves but once we were on it, I switched off and tried not to think about what was about to happen. I got ready, stuck my light on my goggles and had another light attached to the back of my costume and got vaselined-up. I sat on the edge of the boat, took a deep breath, jumped in and swam into Shakespeare beach. Once there and clear of the water, the boat's horn sounded and I was off at 3.30am with the team shouting 'Allez, allez, allez, Kate's swimming to Calais' ringing in my ears.

I then readied myself for panic to set in - it was dark, I couldn't see anything in the water, I was in the water alone and it was a long long way to France. But it didn't. I settled in quite quickly in the dark although for a period between hour 2-3, I had a wobble. My left shoulder was already making itself felt and one of my legs felt like it was on the verge of cramping up and the lights from the English coast still looked very close. But shortly after, the sun slowly started coming up and I again settled down. For the following 5 hours or so, I enjoyed being amongst container ships, seeing ferries, thanked the weather gods for calm weather and watched the team leap into action every half an hour for feeds.

I knew once I came out of the NE shipping lane, I was on the last stretch but what I didn't know is that for me, it would be the hardest part of the swim. Firstly, France has a terrible habit of looking closer than it really is. Secondly by this time I was aware of the sun slowly lowering and I started to worry about swimming in the dark again being tired and not as able to handle the cold as well. Thirdly, my under-training showed and I wasn't as useful through the water. And fourthly, I was struggling on my feeding plan. The carb feeds were making me feel sick and I felt very bloated and quite queasy. By this stage, I'd also stopped having any solid food as I didn't actually want to be sick and for a while the team gave me tea with fruit sugar, hot chocolate and flat coke-anything to keep me moving.. I was feeling demoralised now as France didn't seem to be getting any closer despite the team saying it was. I had started to go quiet at feeds which the team weren't expecting (and wasn’t normal for me) and then I was asked to put a hard half hour in to make the most of the slack tide (also my stroke rate had dropped over the last hour). So I did, only because I really really didn't want to be out for another 6hours. And then I went to the boat for the next feed and was asked to do it again. By this time I had worked out what was happening/about to happen as France wasn't getting closer and when about half an hour ago, the lighthouse at Cap Gris Nez was on my left, it was now straightahead. I asked the team whether I was moving forward at all and was I ever going to get in, to which they obviously replied yes and yes. The pilot told the team that it would now be at least another 2 hours as I'd have to swim further towards Wissant. In the water, I didn't know this but what I did know was that the damn lighthouse was now on my right and the coast was further away and I was moving parallel to it. I was asked whether I wanted a support swimmer in and said no which signalled to me that I still had more to give. Don't get me wrong, I really really wanted it to be over and I didn't want to be in the dark again and I felt bad that the crew were still going to be out for hours and it all felt like it was never going to end but I obviously wasn't ready to give up then.

I thought of friends and family watching the tracker and willing me on and not understanding if I gave up when I was so close to land. It is very demoralising putting in some hard swimming for a while and looking up and not being any closer. However I knew I was never going to attempt the swim again, conditions had been good and the last-minute organisation of the swim had all fallen into place so I couldn't let the chance go. This whole period took 5 hours. 5 hours of feeling pretty ropey and queasy swimming what appears to be parallel to France for much of it ain't fun I can assure you.

Anyway, I plugged away, watched the sun sinking and just kept moving my arms in a swimming fashion and then suddenly I saw a bit of commotion on the boat and I saw Simon waving his trunks at me. The next thing I heard was the official observer shouting just go into the beach, you’re out of the tidal flow. Simon jumped into the water and a few minutes later, just as the sun was setting 15hours 26mins after I started, and when my hands touched the sand, I finally stood up and staggered onto French soil, cleared the water and hugged Simon.

I think we spent less than 4 minutes on the beach (most of the time I was genuinely trying not to be sick..!), picked up some French pebbles and swam back to the boat. We headed back to Dover with me trying to work out how I was not going to be sick on a 2 hour boat ride in the dark with no horizon to focus on and a tummy full of carb drinks. It turns out sleep is the way forward and the knowledge that a sick bucket is close by! This is obviously not a glamorous sport in any way..

I have been a Channel swimmer for a year now but it still feels a bit of a dream. Cliff Golding, my long distance swimming mentor (now his really IS an interesting story. .) rang me afterwards for a rundown and asked me what I'd learnt. Apart from learning that Cliff needed more than one week's notice to be in my crew and that my non-swimming friends and family thought it really would have been easier for me to have taken the ferry, I said I didn't know but once I had a bit of time to think about it, I decided it was that I should take more chances, be brave and attempt more things that scare me. It probably was a bit reckless doing it at the last minute right at the end of the season but it all fell into place and I came out with a successful swim, thanks to an excellent experienced boat crew on SUVA, a fabulous support team and my own stubborn determination. I will take this with me for future endeavours, as well as this little sentiment:

I know my last-minute approach wouldn't be the right way for some but it was the only way I could do it as if I'd had time to think about it, my brain probably would have exploded with the pressure, particularly as there's very little one can control during a Channel swim. This time though, I took a chance, it worked for me and it was most definitely worth it.