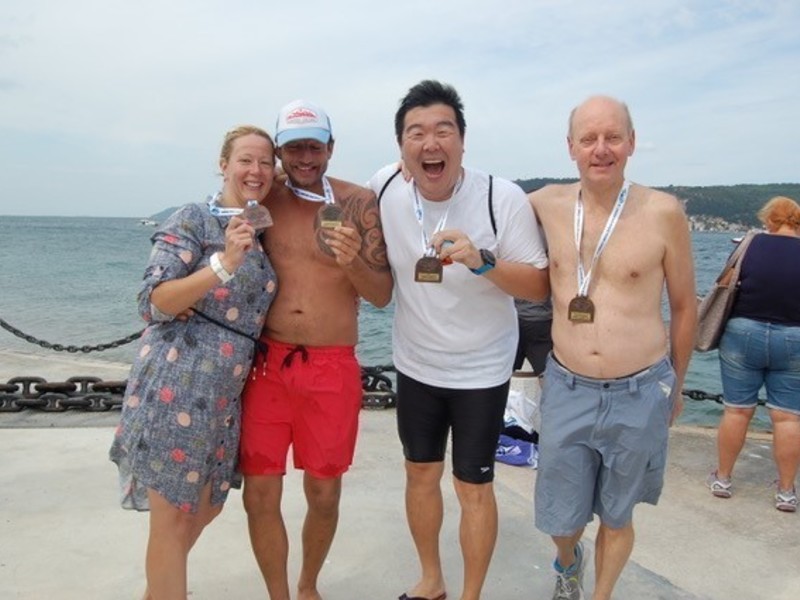 SwimTrekker Robin Fry shares his experience of preparing for and completing the Hellespont Swim along with his top tips.

JG Ballard described Charles Sprawson’s seminal 1993 book on swimming, Haunts of the Black Masseur, as “an exhilarating plunge into the deepest pools inside our heads”. And for me, at its heart, are the constant oblique glances to one place: the Hellespont.

So, finally, 20 years after reading the book, I recovered that memory and, after a wonderful swimming holiday around Milos in September 2016, decided now was the time.

For training, I swam regularly at my local pool until, frustratingly, it was closed for the summer to create new changing facilities and I had to use less convenient pools. I also took some lessons at an endless pool but found this very challenging. The breathing was the hardest part.

I then joined a triathlon club, Clapham Chasers, for training sessions in preference to a masters swimming club, which I thought might be more focused on established swimmers than my plodding technique. At the beginning of the summer I signed up for three open water events: two at Eton Dorney lake and one in the sea at Bournemouth. I’m not keen on swimming in wetsuits but I realised that gaining as much varied experience as possible was important to the stamina and robustness needed for the Hellespont.

At the end of July, I took part in the 6.5km Bosphorus swim. I reasoned that the best possible preparation for the Hellespont would be the similar conditions and experience at the other end of the Sea of Marmaris. Disaster nearly struck me at the start of this swim when I slipped off the pontoon and fell heavily into the water. When I surfaced, both my hat and goggles were gone and other swimmers were plunging into the water around me, creating splash and confusion.

My training! My preparation! All for nothing! Could I swim 6.5kms sidestroke? No! My race continued with these spinning thoughts in my head. But the water was warm and clear, I saw dolphins and I began to enjoy myself. I finished in 1:17.

Buoyed by this experience, a month later I headed to Canakkale, where the Hellespont (for Turks, read Dardanelles) swim takes place. It’s a difficult place to reach. I took an early morning flight to Istanbul Ataturk airport, the metro to Yenikapi ferry terminal, the boat to Bandirma and then a bus to Canakkale, finally arriving there at about 8.30pm, exhausted.

The next morning Huseyin Dermis and Simon Murie from Swimtrekorganised an acclimatisation swim in the bay. This was helpful in reassuring us of the water temperature (about 22-23 degrees) but alarming to see the sea becoming increasingly lumpy: winds of 42km/hr (Force 6) were forecast for the next day when the swim was to take place! Next up was a trip in a small boat to take us across to Ecebat and back to see the swim route. We were fortunate to have Simon Murie on board. He has many years' experience with this swim starting in 2000 during a trip that inspired the creation of SwimTrek. He gave us the following advice: head for the radio mast for 700m, then the Turkish flag for 1.2km and then the stadium floodlights. After that, aim for the ferry pier. Just don’t aim for the Naval Museum where the swim actually ends or you’ll miss it by a country mile.

It seemed so clear from the boat: I could establish a transit from the military fortification at Abydos point back to a distinctive cone-shaped hill. It would be obvious when I was sufficiently over towards the European side to take the dog-leg downstream to Canakkale, or so I thought!

The organisers announced that the swim for the following day (30 August – Turkish Independence day) was to be brought forward from 10am to 8.30am to (hopefully) secure calmer conditions. At least it wasn’t to be cancelled or postponed like in 2014. The following morning at 7am we arrived at the Naval Museum and the location of the finish ramp where there was a bag drop. We duly stripped to trunks, goggles and slippers. It was cold and we were all quite subdued. A coach then took us with the other 600 plus Turkish competitors to the ferry port where we then went over to Ecebat, 5km upstream and on the European side. Fortunately, we were able to sit in our coach. It was very quiet. No rousing sing-song. We were all anxious for the race and state of the waves. No going back now.

The coach took us about 500m to the edge of Ecebat to a ramp down onto a beach. We disembarked and the throng increased. There were some rousing renditions of Turkish nationalist songs. We all were now much happier, despite the wind. To be safer, I put my goggles on first and then the hat on top.

After a delay of about 10 minutes the whistle went and we were off down the beach into the water. Radio mast, I thought. Just look for that.

The first part was very choppy which made sighting difficult. I got my head down and tried to stroke in rhythm with the waves as I found this was the best technique but it meant I was constantly careering off-course. Sighting sometimes took two or three attempts because of the waves. The radio mast (some 5km away) was faint and grey in the distance.

I kept ploughing on with my old Australian crawl – my technique had by now fallen apart and I missed my transit. It still seemed that I was a long way off the Asian side and I could no longer see any other swimmers. Finally, turning south towards a high Turkish flag, I hoped the water would be calmer or at least the waves might come from behind but I was still swimming parallel to the waves. When do I get the current? At this stage however I began to relax; I didn’t really mind about the conditions anymore. It was warm and, most importantly, I hadn’t got cramp or pulled a muscle. I could finish this. As Canakkale came close, Simon came up to me in a RIB (Rigid Inflatable Boat). “Head to the stadium lights for five minutes and then turn right along the ferries,” he shouted through the spray. I gave a weak thumbs up and murmured OK.

But the conditions were not getting easier. Alongside the ferries and a Turkish frigate, I just didn’t seem to be moving. Turkish cadets, clearly puzzled at my floundering, were gazing down at me from the frigate. I inched along against the (now adverse) current. And then I saw the cream-coloured customs house at the Naval Museum. I put my head down and pulled hard for the finish. There were other swimmers alongside me again. I finally saw bottom and then I was clambering up the ramp. Home!

My friend Alan from San Francisco arrived beaming at my side and my son, Jasper, who had been photographing the event gave me a big hug. “Well done, Dad! Proud of you.”

My time was 1:32 and I was very happy with that. But I could see that some swimmers were being swept past the finish point and struggling to get back or were being picked up by the little day fishing boats careering around the point. In total, 436 swimmers finished.

One of our girls (Heidi – incredible achievement) did the race in 1:04 by setting her Garmin to ensure she turned exactly at the 700m and 1.2km marks that we’d been shown the previous day. She was first in her group although, insultingly, she had been put in the wrong age group and left the awards ceremony before her first-place podium award was announced. She showed that, even though swimming at a similar speed to many of us, commitment to a race plan made a difference of 30-40 minutes. I’ll try to remember that next time!

On reflection, this swim is tough but definitely achievable if, like me, you swim regularly for maybe one to two kilometres per session in the pool. However, it will make a huge difference if you can do one or two open water events in the sea to experience waves, rather than just in lakes. Being buffeted by the waves is fun but could be alarming. The key to succeeding in this event is some familiarity with sea swimming and a clear commitment to keeping to your chosen route. The winner was a Turkish man of 52 with a new course record of 39:33 closely followed by a 14-year old girl! After that, there were apparently 50-60 very strong Turkish swimmers who sought to finesse the end but had to struggle to return back after over-shooting. Some who tried this didn’t finish.

On a scale of 1 to 10 (1= flat calm, easy; 10 = too rough, not making any headway, giving up exhausted) I would say, for me, this was an 8. Certainly, it was more challenging than the Bosphorus swim, even though it was shorter.

In previous years, the foreign swimmers numbered over 200. This year it was only about 18 for a couple of reasons including the mid-week timing and continuing uncertainty over security in Turkey. To me it felt very safe indeed and we had a wonderful group: Alan, Adam, Helen, Matthew, Chris, Justin, Heidi, Chuck, Marvin, Nicola, Scott, Lorna, Annabelle, John, Simon, Bodil and Robert.

Huseyin from SwimTrek was a patient, supportive and reassuring coach for us. And Simon, who clearly so wanted to swim the race, chose instead to be on a safety boat, for us, because of the challenging conditions. Much appreciated Simon and thank you and all at Swimtrek.

Photos thanks to Erin Sun