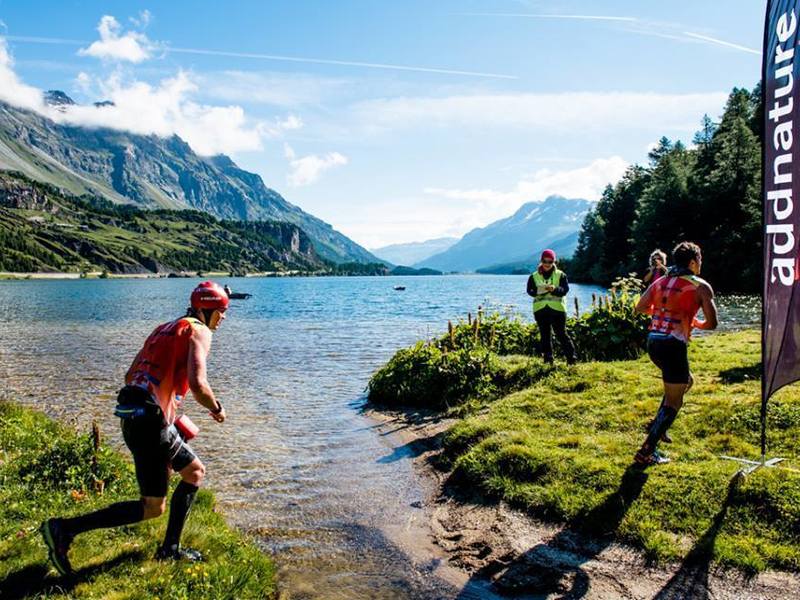 Have you ever heard about Swimrun-racing? Me neither! Well, at least not three years ago. Back then, my future brother-in-law Wolfgang and I decided to take a break from our regular yearly hiking and climbing tours – and that we should try something new instead. A friend recommended the swimming adventures offered by SwimTrek. And so we had a plan.

Our only problem: I was a very poor swimmer and Wolf could not do the crawl at all. Still we booked the trip and used the remaining weeks to practice for our very first swimming holiday. In the end we had a wonderful time down in Slovenia, because of the beautiful nature and all the cool people around us. Besides that we also realised that our swimming technique wasn’t that bad anymore – probably due to all the swimming sessions around Lake Bled, Lake Bohinj, the emerald Soca river etc. Back in Germany, we added several swimming competitions to our 2013-list of planned marathons and trail runs. We also joined a triathlon association to improve and intensify our training. It was there when we first heard about ÖTILLÖ, a race that was ranked as one of the toughest endurance races in the world by CNN in 2012.

This “Swimrun World Championship” is a unique race in an unique environment. The race is structured so that teams of two complete the entire 65km of running and 10km of swimming together across a series of islands (Ö till Ö = “from island to island”) in the Swedish Archipelago. There are 23 islands to run across, 22 straights to swim through, 44 transitions. In order to have a hope of finishing, it’s virtually required that you swim in your shoes and run in your wetsuit. Wetsuits are also mandatory because of the water temperature, which can get down to 10C.

Of course, we wanted to be part of this adventure. Still, it isn’t that easy to get on the list of entrants, since only 120 teams are allowed to participate in the race. First, we did not manage to get a spot via the official merit selection. Then, we were unlucky in the random ticket selection lottery. So our last chance was a series of qualifier races, mostly taking part in Scandinavia, where Swimrun-racing is already very popular.

After months of intensive training we went to Sweden in June 2014 to participate in the Borå Swimrun. Of course, we did not win and therefore qualify right away – but still managed to come in as the first non-swedish team, finishing up 7th place. Again, we practised hard. And one month later, taking part in the Engadin Swimrun in Switzerland, we finally managed to get hold of one of the three highly coveted qualifier spots for ÖTILLÖ 2014.

So – that’s the story already. If this sounds interesting to you, check out the live broadcast from the World Championship race on http://www.otillo.se/ on the 1st of September to find out about the actual performance of Team SwimTrek.com. And, how we use this opportunity to spread the word about fantastic swimming holidays that can start a whole new sports career ;-)