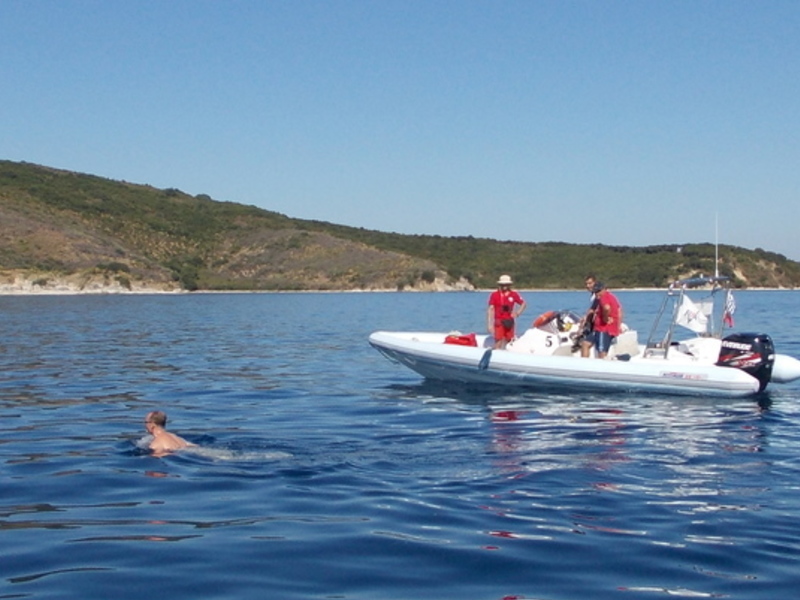 A TALE OF TWO SWIMMERS

In his regular column with H2Open magazine, SwimTrek’s Simon Murie highlights swims to add to your wish list. This month, Albania to Corfu.

For years, Albania was one of the world's most closed-off and strictly controlled countries. It was left with no friends at all after shunning both the Soviets and the Chinese for being 'revisionist' to the ideals of Stalinism. From 1944 to 1985 its leader Enver Hoxha pursued a policy of isolationism and state sponsored repression which led to many of its citizens attempting to escape through the neighbouring countries of Greece and former Yugoslavia.

However the border areas as well as being heavily guarded were classified as being “sensitive”, so even approaching them was fraught with danger. Albanians faced internment or execution if caught trying to flee. For many Albanians that left the narrow Corfu Channel, which separates the Greek island of Corfu from mainland Albania, as the only possible escape route to the west. Over the years it is estimated that thousands of Albanians tried fleeing to the West by this route. In fact many of the tavernas on the Greek island are staffed by Albanians who reportedly made the crossing in the 80s & 90s.

At its narrowest point Corfu and Albania are separated by only 2 kilometres and on clear and quiet evenings voices and noises carry across the channel and the headlights of cars can be seen on the opposite shore. From impoverished Albania, the appearance of the more prosperous Greek island must have made it seem a most tantalising prospect.

To Dimitri Gkoumas, a Greek Albanian whose mother was from Corfu and whose father was from Thessaloniki on the Greek mainland, a cruel

twist of fate after the end of World War II made them settle in Albania. From then on his family were unable to leave and like a lot of ethnic Greeks were subjected to great hardship under the Hoxha regime. When Gkoumas reached 17 he began preparations for his escape by swimming to Corfu. Due to restrictions on movement around the country he was unable to attempt it at the narrowest point so he would have to make his break for freedom from the town of Himarë, which is around 20 miles from Corfu.

For a couple of years he trained and on a calm day in September 1985, he entered the water to attempt the swim across the strait. As well as the physicality of having to swim a distance which is similar to the English Channel, he also had the major issue of avoiding both the floating mines which surrounded the Albanian coast, as well as patrol boats who were known to shoot would-be escapees on sight. He swam for around five hours before an Albanian patrol boat spotted him.

“They tried repeatedly to run me down with the boat, to kill or drown me”, says Gkoumas. Eventually he was taken from the water and beaten. He was subsequently sentenced to 12 years in a forced labour camp, all for wanting to swim across this stretch of water to a better life.

Fast forward to the 1990s and Albania became a democracy and a member of NATO so travel overseas in the present day is a little less fraught then it once was!

Thomas W Hodgkinson a British freelance journalist who has a house in Corfu was inspired by the late travel writer, Patrick Leigh Fermor, who he had been informed, gazed across the water towards Albania and murmured: "I could swim that." He never got around to it. And this, thought Hodgkinson, was reason enough for him to try.

In 2011 Hodgkinson set out to attempt the first “official” swim crossing of the strait by swimming the more direct 2km from Ksamil Sarande on the Albanian side to Agios Stefanos on Corfu.

He says, “the biggest danger I had assumed was from ferries but I wasn't particularly worried. For one thing, I had spent every morning over the previous week ferry-spotting. I'd noticed what I took to be a more or less clear window between 11 and 12 each day. I was also encouraged by the knowledge that the Greek Minister of Shipping had arranged that every ferry captain be informed in advance of what was taking place that day, and requested to slow his speed down to less than 10 knots”.

The directive from the Shipping Minister turned out to be quite fortunate as 20 minutes into his swim, and at the time he had calculated no ferries should be in the area, an enormous Minoan Lines ferry ploughed up behind him.

“The boat was near enough that I could hear the captain on the intercom, telling his passengers that if they looked to their right, they would see a small begoggled figure splashing his way from one country to another,” says Hogkinson.

An unexpected chafing incident caused Thomas to have to relieve himself of his swimming shorts at around the midway point, so the second half of the swim was conducted au naturel until he arrived near the beach on Agios Stephanos and quickly whipped his costume back on before walking up to the Damianos Bar and a large glass of local Greek Mythos beer waiting for him.

In this tale of two swimmers, the contrasts behind the swims and crossing attempts couldn’t be starker. With all open water swims it’s worth reflecting on the history of that stretch of water and what it may have witnessed over the years. You might be amazed at what and who has preceded you.