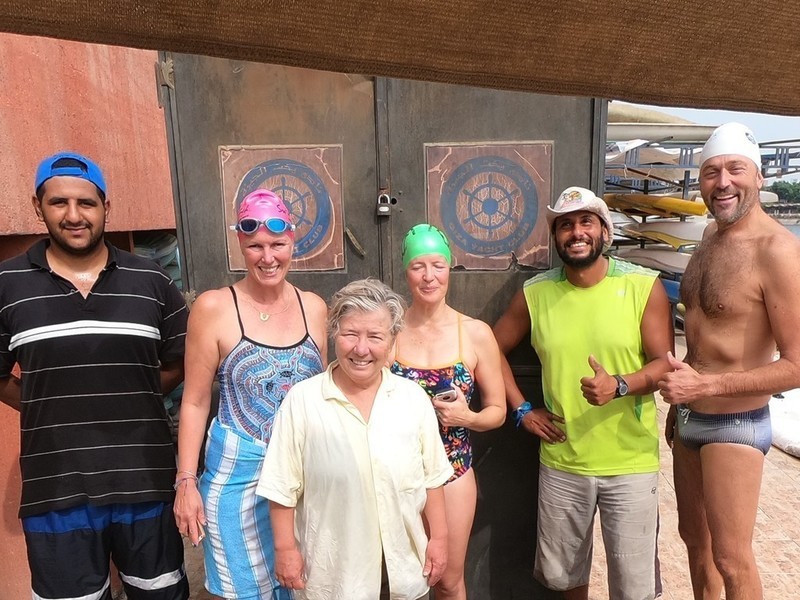 When one (swimming) door closes, another one opens…

SwimTrek founder Simon is always on the lookout for his next swimming adventure, despite the fact there may be obstacles in his way. So when a planned swim failed to come fruition, he gathered his friends and made an equally impressive swim crossing a reality!

I have a confession to make. I’ve never liked swimming for swimming’s sake. Sure, I enjoy the exhilaration of immersing myself in open water just like the next swimmer, but for me it helps if there is a reason for the swim, whether it’s geographical, political, or even mythological!

Over the years I have taken myself off to places near and far to achieve these aims. One such trip was taken last October (2018) to Egypt and specifically Suez; an area that evokes memories of past hostilities as well as current day commercial activities which generates around $5 billion annually for this Middle Eastern country. The city of Suez stands at the bridge between the canal and the gulf which both bear its name. The appeal was that this stretch of water also divides continental Africa from the Sinai Peninsula of the Middle East and hence would be a cross-continental swim between Africa and Asia!

With this in mind, a group of 5 of us arrived into Suez. Prior to arrival we had identified 2 potential swim crossings, 1 in the Gulf of around 10kms between Adabiya and Mousa and a 2nd in Great Bitter Lake which is in the middle of the Canal at around 5kms width.

An example of what we were to face quickly became apparent when checking into our local Suez Hotel which overlooked the Canal. From all windows we were faced with the signs “Taking photography of the Canal is strictly prohibited.” Visits to the local yacht club and conversations with fishermen to source boats for the potential crossing all proved fruitless. Military checkpoints dotted along both the Gulf and Canal made even accessing the water nearly impossible.

After a few days it quickly became apparent that this swim wasn’t going to happen anytime soon, so with just a few days left in Egypt we headed off to Cairo to forget about our swimming goal. However with our accommodation overlooking the great river Nile in the centre of the city, we were able to see that nearly all boat traffic didn’t get going until late morning and we started hatching a plan that maybe we could get a crossing in after all and across an equally significant waterway! A few enquiries at some of the canoe clubs along the river unearthed a couple of local Egyptian paddlers who thought it would be fun to escort a group of odd Westerners who wanted something a little different then pyramids and souks.

The next morning, we gathered early with our kayak support and paddled both across and upstream to our start point in front of Umm Kulthum public park, which was bereft of anyone at this time. From here on the Nile’s Eastern bank, we could see the Cairo Opera House and Qasr al-Nil Bridge, the far side just some 800m across. Visibility was around a metre and the water felt relatively clean which was surprising, given that we were in the centre of this megacity of ten million people. Half way through the crossing we were joined by what I took to be a police boat and would mean an end to the swim, but after stopping for a few minutes it just carried on its way seemingly unperturbed with what we were doing. We were swimming strongly all the way across as we didn’t want to be taken too far down the river by the stream which was running at a steady rate of just under 2 knots. After what was probably 12-15 minutes of swimming we started to approach the opposite bank and what appeared to be a private residence. On closer inspection we were somewhat alarmed to see that we were being greeted by a pair of soldiers on duty eyeing our every move, with rifles in hand. We later found out that it was the home of a prominent Egyptian politician. Thinking that this wouldn’t be the best exit point, we decided on swimming back to the canoe club a further 700m downstream. On arriving back on dry land we had conversations about the famous Egyptian open water swimmers of the 50s and 60s such as Abdel Latif Abu Heif, who was known as the “Nile Crocodile.” Thinking about the history of this great river, that rises thousands of miles away in the mountains of Ethiopia and Rwanda, was somewhat humbling. This swim was a fabulous way to truly immerse ourselves in this city and country and get a unique perspective on things.

The trip was also a good reminder of the old adage, that as one door closes another one can open up!

Egypt is a fantastic location for swimming, with much of its coastline enjoying beautiful and varied marine life and exciting sights such as shipwrecks and underwater vistas. All this can be found on our Red Sea Liveaboard - Egypt trip: a divers paradise even better enjoyed on a swimming holiday.

This blog was originally published as an article in Outdoor Swimmer.