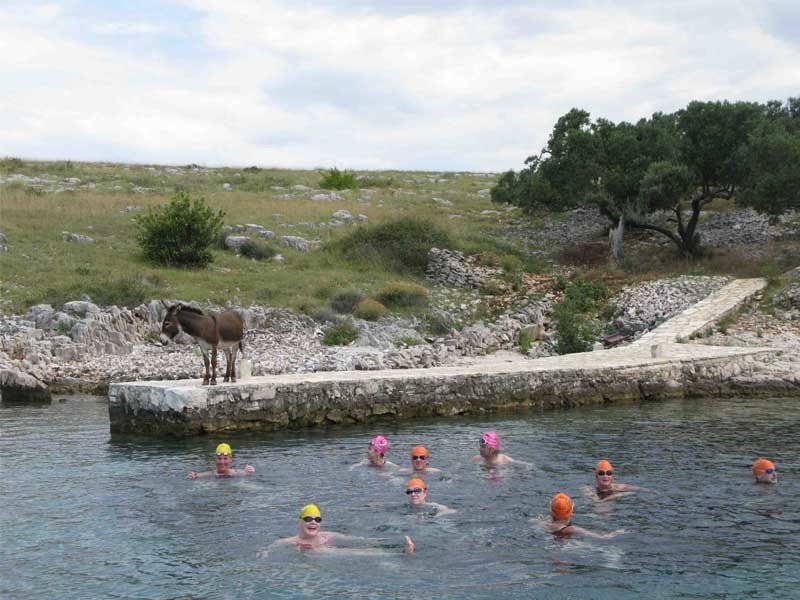 I’m now back home in Cornwall having just finished my second season as a guide with SwimTrek and, like last year, I spent nearly all my time in Croatia on the Dalmatian coast. I think that SwimTrek have decided that now my Croatian vocabulary has expanded to roughly 7 words I am now their man in Dalmatia. That suits me – I love the place.

This summer I worked with eight different guides over the course of nine weeks. I was trying to work out what that said about my personal habits when it occurred to me that it was probably more that guides just love to come to Croatia. And why wouldn’t they – it’s a swimmer’s paradise with no jellyfish, no swell, no howling winds, no really extreme heat. The only minor quibble is the caustic saltiness of the Adriatic, and even that has the benefit of providing extra buoyancy for skinny swimmers.

The new SwimTrek location of Sali on Dugi Otok (‘Long Island’) stands 25km out in the Adriatic, west of Zadar. The spectacular cliffs that form the south-western edge of the island mark the last bit of land for over 130km before a badly disoriented swimmer would hit Italy somewhere around Ancona. Although Dugi Otok is a large island with 45km of roads (but not a single traffic light), even in the main harbour town of Sali you do get a pleasant feeling of being a long way from mainland hassles. That carefree feeling is fostered by the generous opening hours of the bars, restaurants, and ice-cream parlours. At the end of the quay, the bar ‘Maritimo’ opens at 6.00am so that the travellers on the first ferry to Zadar can grab a strong coffee. I never managed to find out when it closes. Luckily, the Hotel Sali is a short stagger around the corner from the Maritimo, in a quiet little bay of its own.

Each morning our pilot boat collects the guests from the small sheltered jetty beneath the hotel and then we head out into the maze of islands and blue waters that surrounds Dugi Otok and the neighbouring Kornati National Park. Every island has its own unique character; some may have a rustic restaurant, others just the odd run-down retreat, or an olive grove, or nothing at all. But they all have one thing in common – unpronounceable names. So, as this was the inaugural year, we took to naming the swims ourselves. On Week One we happened to be swimming around one uninhabited island with Jim, who had a mild case of emphysema. From the safety boat I suddenly heard this god-awful rasping and choking bray. Thinking Jim had done a few yards too many, I was just about to leap in and help him out when I realised the noise was the resident donkey come down to the jetty to welcome us. That swim is ‘Jim’s Chest’. On another tiny island we discovered a lonely, and very friendly, cat; the next day we felt so bad that we motored over with two tins of sardines – to add to, it turned out, a huge pile of empty discarded sardine tins that we found behind a wall. Probably the best fed cat in Croatia now resides on ‘Little Sardinia’.

The wildlife under the water is just as interesting. Kornati has been a marine reserve since 1980 and the policy has paid off with the incredible amount of sea-life you will spot whilst swimming, from dolphins to stingrays to shoals of tiddlers. Guests found what they thought was an abandoned catch of ray on the bottom of one bay; until they discovered that ray apparently sleep on their backs and don’t particularly like to be rudely woken up by swimmers in bright hats. We call that spot ‘Sleepy Ray Bay’.

Of course, the best swim is simply known as The Cliffs, for obvious reasons. The cliffs rise over 30m high from the surface, which is fairly impressive in itself, but they also plunge vertically down into the ocean to a depth of over 80m. And, as the sea is so clear that you can see a good portion of the way down, it is enough to give you vertigo when you are swimming alongside them. Some guests freak out completely and flounder away to swim 50m out from the cliffs just so they can’t see that disorienting drop. They would rather just stare into deep blue nothing. Yet, just a kilometre or so around the corner, that swim finishes in a beautiful shallow tranquil bay that features one of Dugi Otok’s few sandy beaches. It sums up all that is best about Dugi Otok – the swims constantly challenge and surprise you but are at the same time very reassuring and accessible. I can’t wait to head back there next year.