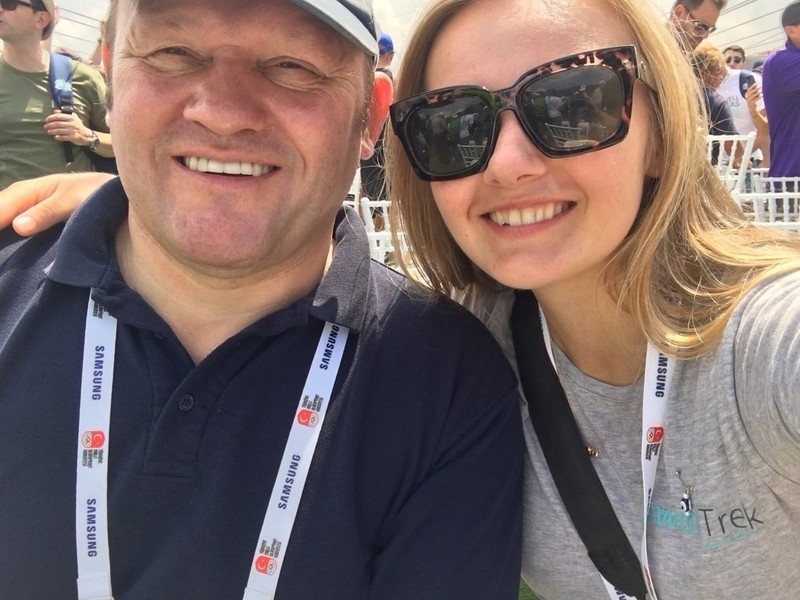 Swimming’s A Family Affair: The Special Feeling of Completing the Bosphorus With Loved Ones

The Bosphorus Cross Continental Swim Race represents many things to many people, be it a chance to push physical limits by finishing as quickly as possible or by completing a mass participation event for the first time. Taking part in its 30th year, the 6.5km swim from Asia to Europe had its largest race contingent ever in 2018, and it was special to be part of the 2400+ swimmers competing. The Bosphorus was a heady rush of many things for me too. A first major competitive race in years, a new country to visit, the thrill of swimming across continents, and taking it all on with family by my side, as I was joined by my father and godfather for the event. Working for SwimTrek has sparked my passion for adventure swim races as an adult and rekindled my love for competitive swimming from my teenage club days, but the greatest aspect that I can take away from the event is that I am incredibly fortunate to have been able to share this achievement with a parent.

Dad got into swimming from a young age, and whilst all three of my sisters made waves in the swimming club, I am the only child still swimming. Andrew (far right, front row) with his WASC teammates in the 1970s Olivia (second from left, front row) with WASC teammates in 2011

Having been part of the same club is a wonderful thing to be able to share with my father. Dad joined at Wellingborough Amateur Swimming Club at its inception and I was swimming for the club as it celebrated its 40th anniversary. A love of sport is something we have always shared and has brought us from spectating together to competing together.

The idea was sparked after my casual relaying to family at the end of the 2017 event, which lit a tinder box for my dad’s own ambitions for the race. “I can’t believe you haven’t told me about this before’’ were his cries, ‘we’re defiantly doing this together next year!’ Godparent Neil was roped in too and so the three of us set off to Istanbul to take on the challenge together.

Preparation for the race was varied between us, and whilst I am lucky enough to benefit from regular swim sessions on the Brighton coastline, my family were confined to the pool in landlocked Northamptonshire. However, all training routes lead to the same start line and by the time we arrived in Istanbul, we were either ready or we weren’t, which is a reassuring thought when enjoying a few pre-race gin and tonics in the days before!

We had early naive hopes of swimming the race together, but regardless of the difficulty of keeping the same pace for the race’s duration, being separated onto two different boats for the different age ranges made the decision for us.

So began the long build up to the start of the race, taking the journey by boat to the starting pontoon on Istanbul’s Asian side. With fellow SwimTrekker friends at my side, my earlier nerves turned to giddy excitement as the reality of the race drew closer. As we were on the first boat out, we would be the second wave of competitors to actually start the race, and so we were able to watch and enjoy the first few swimmers entering the water without the pressure of our own start happening imminently. By the time it came for me to dive in, the adrenaline was surging through me and carried me swiftly and blissfully through the water. Conditions were unbelievable, with brilliant sunshine and clear blue skies leading the way, the sighting points of the two bridges visible from the start. The first few minutes I was surrounded by many others, but the concerns I had of the anxiety-inducing busyness of a mass participation event melted into the water as I swim my own race. The field lengthened out, I settled into my rhythm and enjoyed watching my arms pull stroke after stroke in the gorgeous deep blue hue of the strait, feeling powerful edging ever closer to the finish line.

The final stretch was the longest for me, and after getting caught like many others did in the current of the bays, I pulled myself up onto the pontoon in a respectable time of 1 hour 20 minutes. Legs weak with exhaustion and elation, finishing the race was a thrill like I’d never experienced before. Bursting with pride, I high fived and hugged the closest stranger, another swimmer without a care of sharing this moment with a new soul. Dad was the first familiar face I saw upon completion of the race, and we collapsed in happy heap in front of the official timings screen, which confirmed he had beaten me by two minutes! After reuniting with Neil, we then headed back to the hotel to relive the race and celebrate with our fellow SwimTrekkers. I enjoyed the Bosphorus event hugely and to know we were in the number of the special few who get to swim the strait on the one day it opens up a year was an honour. Dad certainly has the taste for open water swim races now, with him eyeing the Hellespont for 2019 in particular. He has raised over £1,000 for Aspire CILT with his swim and if you would like to donate to his cause, you can do so here. There’s a whole world full of swimming challenges for us to take on together, the only question is where to next?

Have you completed the Bosphorus or another swimming race as a family? We’d love to hear from you if so! Email marketing@swimtrek.com to share your incredible family swims or other personal swimming achievements.