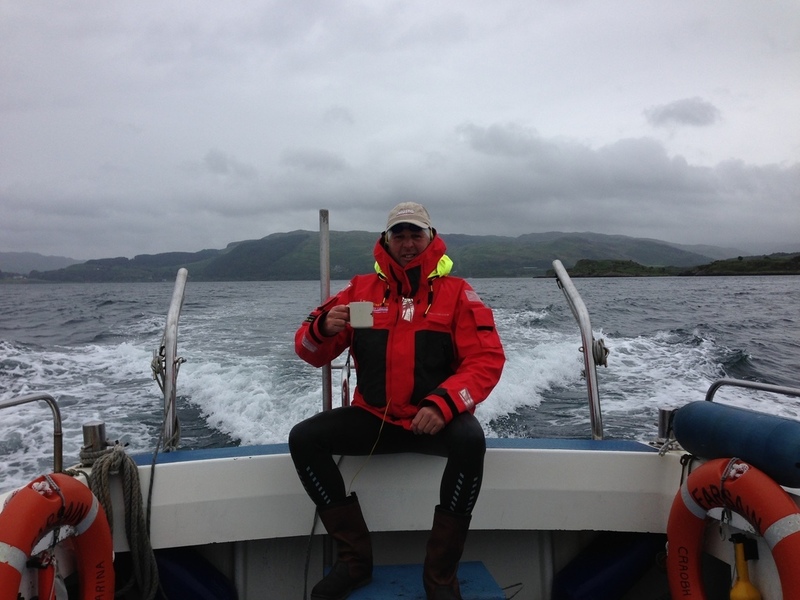 I've enjoyed swimming for the past forty years starting off in the learner pool at the local Swimming Pool to a successful competitive swimming career. At the age 15, I was selected to represent the England Youth Team, then later the England Senior Team and then Great Britain full International level, specialising as a 1500 metre freestyle swimmer. Having now retired from competitive swimming, I've more recently developed an interest in wild water swimming, and the TV programme 'Wild Swimming with Robson Green' inspired me to take the SwimTrek Corryvreckan challenge in Scotland. In fact, believe it or not Robson actually phoned me at work one day to wish me luck!

The following summer, I booked with Swim Trek that very trip, taking a full team (12) of really good strong ex competitive / Beach Lifeguard swimmers with open water experience to swim Corryvreckan and thoroughly enjoyed it. The Safety guides/brief, acclimatisation swim provided by Swim Trek were first class and made the team feel very welcome. So much so, I booked the trip again the following year to successfully be the first person to swim across Corryvreckan two ways in 2012.

This time to attempt a continuous three way swim across the Gulf of Corryvreckan never before challenged. As the third largest whirlpool in the world and 600 feet deep this place is not for the faint hearted. Get it wrong and you could find yourself whirling down the "plug hole" ! Conditions on the day were tricky, there was a slight swell running, sea temperature 11 degrees C and generally pretty miserable moody, grey day! With a background in competitive swimming, and plenty of research I knew the key elements of attempting a three way crossing were speed, endurance fitness, technique, timing and mentally holding it together. With the current slowing down to approximately 2.8 knots, Duncan my safety boat/skipper initiated the start from the most northern point of Jura. Trying to control your breathing and start swimming in the Atlantic Ocean 6 mile out from the mainland in 11'c isnt easy with sea monsters running through the back of your mind. The combination of the lateral currents and the speed that I was swimming I managed to reach the other side on Scarba in just under 15 minutes! Having settled into a comfortable aerobic rhythm, despite watching jelly fish and goodness knows what glide underneath me every two or three strokes, I began the second leg back towards the Island of Jura, at 600 feet deep it's like swimming through the abyss. Every now and then, much larger mysterious dark objects flashed past underneath me whilst on the surface porpoises were surface popping all around me. Having completed the second leg at around the 35 minute mark and settling into my stroke nicely my feet were now comfortably numb !!

With half way across the final leg, I realised I was in strike distance of reaching the shores of Scarba, despite battling through back eddy's jelly fish and a few dark mental moments the currents felt like they were coming in from all angles. Breathing to my right I had a constant visual of the boat, I could literally taste the coffee on Duncan's safety boat which inspired me to push on. This definitely helped push the taste of the sea water to the back of my mind! As I approached Scarba with approximately 25 metres to go, I could start to see kelp on the bottom, rising up slowly becoming clearer and shallower with every stroke as more and more marine life came into vision. I finally realized that I was soon going to touch the Island of Scarba . I landed on Scarba becoming a Scottish pioneer (and should be etched in Scottish folk law !! :))) as the world's first to complete the Corryvreckan swim three ways and in a very respectable 58 minutes!

On the 10th October this year I have organised with SwimTrek to swim Alcatraz a two ways from the main land, touch the Rock and return for Charity. My nominated charity is the RNLI, as I am an active crew member there. If you would like to help out fund raising for me please get in touch or visit www.justgiving.com/ricksescapefromalcatraz to make a donation.