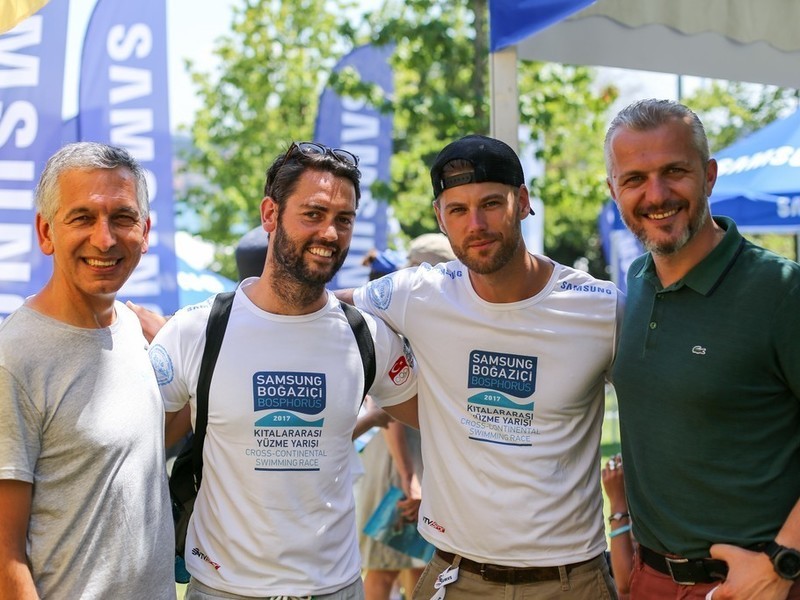 My journey to become a Cross Continental Swimmer

Swim from one continent to another? Erm, sure, why not...

My first venture into open water swim eventing saw me in a Turkish Bosphorus Baptism. The Bosphorus river funnels the Black sea to the Aegean through the bustling city of Istanbul. An incredible setting for such an iconic event. The current assisted 6.5km course sees you thread through the body of the Bosphorus, traversing the continental shelf you’re shouldered with Asia on one side and Europe on the other. With Istanbul as your backdrop, the city and culture are as much of a melting pot as the Bosphorus’ itself. Holding such a diverse history, Istanbul is the perfect setting for a cross-continental swim, from being colonised by the Greek empire, to the Roman and the Ottoman the number of religious and archaeological sites to visit is astounding. The event draws one of the world’s busiest shipping channels to a close as boats are halted on either side whilst we swimmers take our plunge, giving both us and the resident pods of dolphins a clear path. The Turkish Olympic committee take ownership of the event and are proud to champion the swim linking the Asian and European continents. Either side of the river you’ll swim past stunning mosques and intricately adorned churches. The 15th Century Rumelian Castle stands out as one of your first sighting points on the course, reminding you of the grandeur of the event you’re taking part in. The day before the event you have a chance to recce the route on board with the other swimmers – with commentary explaining the route, some historical points of interest and your sighting points, the excitement of the other participants around you is palpable. As we competitors beamed in the Turkish sun and at the location we were in, we watched dolphins making the same journey that we’re going to attempt the following day. On race day the same boat journey comes with a very different feel. Two and a half thousand people wearing nothing but their swimsuits and smiles (and copious amounts of Vaseline) enjoy that same boat ride to the starting pontoon. As I looked around, some are dancing with excitement, some in quiet contemplation of what’s to come. Me – a combination of the two. Then I see the resident hero in this story – Levent Aksut who has completed the course every year bar one since its inception in 1989, he’s sporting a grin that’s enough to give any nervous swimmer some courage. Shuffling through the boat exit into the beaming Turkish sun, you cross the matt that begins your timer chip and leap with hundreds of others into the Bosphorus itself, a river you’re about to become very well acquainted with. Taking a moment to look up and see the Turkish flag fluttering on the Fatih Sultan Mehmet Bridge above, you wholeheartedly feel immersed in the city and the challenge as you look either side at each swimmer taking on their own personal adventure. Whether you’re swimming for speed, for simply completing the event, or for the commendable bragging rights of swimming from one continent to another (as I was), everyone is united in their drive to that finishing pontoon. As I neared the finish I found myself sighting more and more, looking for the little isle of Galatasary Adasi which would be my signal to start bearing to the European side and the finish line. Classic foolhardy confidence hits and I allow myself to relax into the rhythm, I make the turn too late. Now the gentle current that until now I had been politely appreciative of was against me. The race was back on as I fought back at the Bosphorus to bring myself home and to that pontoon. Climbing the ladder there was nothing but smiles and backslaps with strangers as every swimmer was caught up in the atmosphere of taking stock of what we’d achieved I walked through the exit point to have a cross continental swimming towel draped over me.