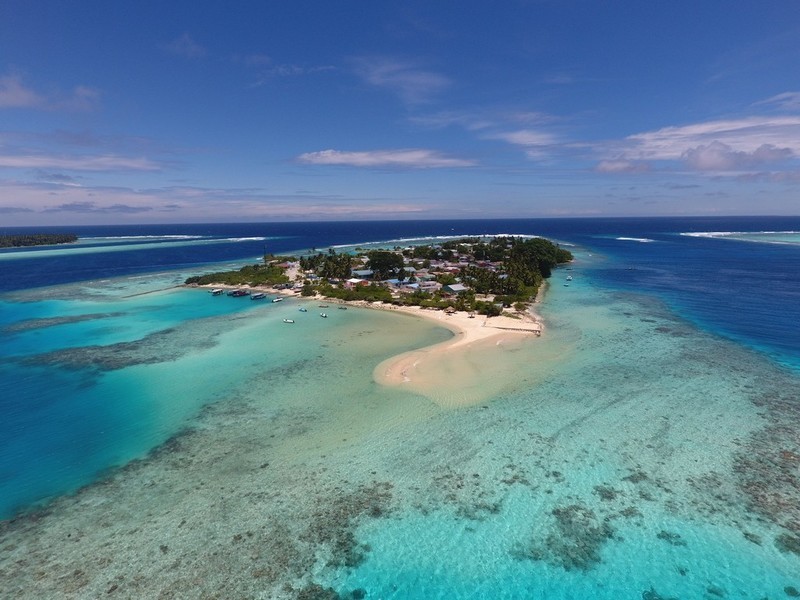 One wet, cold snowy day last February, I had a phone call from my pal, Lesley, who was so excited she could hardly speak-“look at Swimtrek’s trip page, quickly !” were my instructions. I duly did as I was told and was completely dumb struck when I saw the new trip being advertised. We had a brief phone call and decided that we definitely wanted to go and unlike other trips we have done, dates were sorted out very quickly and the booking was made. I don't think we could quite believe what we had done ,but we kept looking at the photos and reading all the exciting things we would do other than swim and decided we had made a good decision.

With this lodged at the back of my mind for the best part of a year, it wasn’t until about a month beforehand that I started to get very excited. The weather at home was dreary, motivating myself to do a few more lengths in the pool was hard work ,but a spot of retail therapy in the form of a couple of new swimsuits -one practical, one not so, but very striking colour wise- made the anticipation seem real.

We flew to Male to meet the guides( how lucky were we to have Simon Murie as one of our guides- great to meet the man behind the logo! ) and other Swimtrek guests- the real work was about to begin!

We were met by Saorla and Kammy ( plenty more on him later!) and whisked away to join the MV Felicity, our home for the next week. I took my trainers off on the jetty and never put a pair of shoes on my feet for the whole of the rest of the week- utter bliss. We quickly met up with the other guests who arrived at varying times during the afternoon and once everyone had arrived we received the boat safety briefing and staff introduction. I was excepting a lot of unpronouncable names, but quickly became used to Eddy, Adam and bizarrely, Ebay- not sure where that one was bought from-Chef ( very important man!), so it was not difficult. We were a total of 10 guests, 2 guides and 8 ship staff, so a ratio of 1:1. Not a bad sign! Acclimatisation swim complete, hats were distributed and a sumptuous meal followed. If that was a sign of the week ahead, then 10 km a day would keep the weight at bay! 5 stars would not be enough-a delectable meal which would become the norm over the week;we were going to be thoroughly spoiled, that much was apparent!

After an early night,we got up early for breakfast and our first swim. The sun was shining, the water was azure blue and breakfast smelt good! We are keen to get started so our first swim began along the Fuldihoo House Reef, a 3km swim along the reef. It was easy to navigate the reef swims as there was an obvious change in the environment below and in the colour of the water . We were delighted to see a huge variety of tropical fish who seemed totally unperturbed by the ten swimmers spoiling their home. The water was quite choppy, which initially surprised me as I was expecting it to be as calm as a mill pond for some reason! Absolutely not, and as the week progressed, conditions became more challenging and navigation more difficult. We were lucky to have the support of a dhonie ( local fishing boat), a dingy and one of the staff in a kayak. This was invaluable if you were at the back of a group and losing touch a little- the bright orange t shirt was easily spotted in the distance. Also, Simon and Saorla didn’t need much encouragement to jump in and guide us on our way.After lunch, a snooze or read for some, we had a shorter 2 km swim, then after showers, a drink from the bar and some down time, another early night.

This pattern became the norm for us, as we motored to different parts of the Vaavu Atoll during the day, There was always something new to see, different conditions and underwater scenes too. Video analysis took place- the hardest part of this was actually beating the current to get back up the ladder to the boat! I was amazed at how hard it was to do and a warning that the water was very different from how it looked from the boat. I have to say, I have never received such comprehensive, positive criticism of my stroke -thank you Simon-and altered how I swam the very next time I got in the water. So many highlights on this trip- a bar b q on a sand bar with a fish caught from the boat, dolphins showing off their acrobatic skills next to us, rays playing in the surf, crabs running along the beach in perfect white shells, the boat’s mast lit up like a fairground ride, cinnamon loaf and pancakes for breakfast, quiz night where our swimming knowledge and literary knowledge were tested, a Maldivan Night with local delicacies cooked followed by an hour of frenetic drumming and dancing by a local group ( dancing performed by the guests too!!), walks round two villages where we saw how the locals lived, night fishing ,but mostly it was about the swimming.

The most challenging day was a 5km swim from Gira Fahu to Kegodhoo- this started with what looked like an easy 500m around a ship wreck before the swim proper. I can honestly say I have never felt so incapable in water in my life!! Caught in the current and I was going nowhere very fast. Amazing that moving less than a meter away, out of the current and you just sailed along! The first half of this swim was current assisted which was fantastic- enjoying the moment, we whizzed along, then turned to meet the chop head on! It was a tough part of the swim, but then the end was in sight so everyone’s spirits lifted as we made our way to the beach It was not to be!!! The current was so strong not even the ace swimmers in the fast group could make it, so we returned to the dhonie to find a different route in and one which clocked up 5 km on my watch.A sense of achievement for sure that day, so tired shoulders were happy to be offered a snorkel that afternoon. We enjoyed about an hour pootling about watching the sea life- amazing colours and all varieties you could imagine. Some of the group were lucky enough to see a ray just before they got back in the boat- how wonderful.

The week continued in much the same vein and I never tired of seeing the white sand, turquoise water and fish life. Place names were a challenge for us- Kunavashi Long Reef,Villivaru House Reef, Fushidhiggaru Falhu, Gira Fahu, Anbarra. but all helped by the lovely Kammy who was the font of all knowledge. He spoke excellent English, had spent a year planning the spots for this trip and loved a joke too- usually at someone else’s expense. He was passionate about his country and was proud to tell us of its history and development. A charming young man and I thank him for stealing my camera on the last afternoon of snorkelling and taking some fabulous shots. For me, Swim Trek trips are about more than just the swimming- obviously that is the main reason I go-I have met some lovely people from different corners of the world, I have been lucky enough to visit a country I never thought I would go to, I have learnt a lot- who knew George Orwell got his inspiration for 1984 whilst he was overlooking the Corryvreckan whirlpool and then near drowned trying to cross it? I have been challenged in a way I have not been before, I have lived for a week on a boat in close confines with 8 total strangers and never heard a cross word spoken,I have been humbled by the local staff who looked after us with utmost care and I’m not quite sure how I will be able to beat this experience.

All too soon it was time to wave goodbye to our new friends and return to the UK. This trip will stay with me for the rest of my life and one which I would consider repeating. Land legs finally returned after about three days- quite disconcerting to find yourself feeling wobbly that long after leaving the boat!

Thank you Lesley for spotting the trip and thank you to everyone on the trip who made it such fun. I learned a lot and it has reignited my joy for swimming, be it pool or sea! 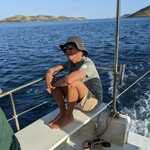 How did you get the drone pics? Haven't seen anything shared by Simon yet.

It was great swimming with you. Hope to see you again on a future Swim Trek!

Virginia, I so appreciate your summary. It was a pleasure to meet you. It was a superb trip - my best Swimtrek ever. I was so delighted that when I got home, I booked a Swimtrek in Sardinia in Sept. It won't be the Maldives but it looks pretty good. 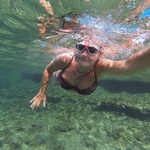 I did the first ever Maldives trip and completely concur with everything you have written. Seeing the photos of the crew and remembering those wonderful swims and the great people we met brings back so many memories. Just so want to go back! Swimtrekker5257 you will enjoy Sardinia.