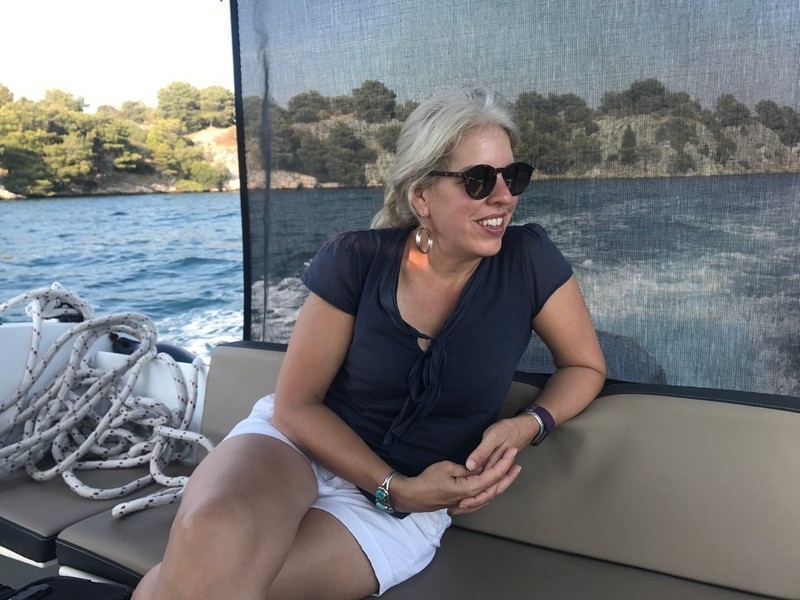 How I Overcame My Fear of Deep Water to Swim The Hellespont: Susie's Story

SwimTrekker Susie Whitfeld completed her crossing of the Hellespont in 2013 after a year of preparation that saw her overcome a fear of deeper open water. Here, in her own words, is her story of how she came to participate in this life-changing event.

I immediately recognised the familiar writing on the envelope that dropped through my front door one rainy winter morning. Anticipating a newsy letter from my best friend Shelly, I found the envelope only contained a torn out page from a Sunday supplement magazine with the words, "Su, this is you." What exactly was the connection between me and an article about a woman who had just completed the iconic Hellespont Dardanelles swim, former ABC news correspondent and lifetime swimmer Lynn Sherr, and written a book about it? I wasn't sure.

But somehow Shelly saw a connection a seed was planted. The only slight issue with attempting this swimming adventure was, although a very competent pool and former competitive swimmer, I was very frightened of open water, especially oceans! The fear of what lurks beneath the waves had always stopped me venturing very far from the shore; I wouldn't even snorkel on holiday. Attempting to swim the ancient route, where Lord Byron failed his first crossing attempt and the mythological Leander met a watery death swimming to be with his lover Hero, was a daunting prospect.

The Dardanelles Strait (formerly known as the Hellespont), the channel linking Europe to Asia in Western Turkey, is the second busiest shipping lane in the world. Ships are stopped once a year on Turkish Victory Day, commemorating the First World War conflict and allowing the race to take place. Partakers are a mix of foreign entrants, with many coming from as far as Australia and the US, as well as Turkish nationals. Participants must navigate the current and whatever else the weather throws at them on the day and complete the crossing in no more than an hour and a half.

My year-long preparation for the Hellespont involved not only conquering my fear of open water swimming but considerable physical preparation. Training saw me swimming in pools, lakes and seas and though taking on the challenge of the cross-continental swim was daunting, it quickly introduced me to the complete joy and freedom that open water swimming has to offer. The exhilaration from overcoming your anxieties to explore a completely different world from a new perspective is so empowering and compared to lap swimming in a pool which can quickly become routine, every open water swim is new and different. My London training consisted of 7am early morning swims in the unheated outdoor Tooting Bec Lido coached by New Zealander Dan Abel whose advice for me to control fear was to ‘think of marshmallows!’ I don't recall thinking of anything whilst swimming the race, but the marshmallow thoughts were there if I needed to fall back on them.

The day of the race dawned and us few hundred swimmers were ferried from Asia across the vast and inexorable straights to begin the race with a force 4 breeze in our faces. I sat with actress Bo Derek, yes, she still looks a '10!’, on the way over to the European side and made a grave mistake of not looking back at the actual finish line I would be aiming for. A lesson was learned here, never lose focus on your end goal! With the ruins of ancient Troy ahead and the battlegrounds of Gallipoli behind, the waves and tide ran hard against us as we navigated our race. The swim is challenging; make the wrong decision en route and you run the risk of being swept out towards Greece. The sea conditions on the day were rough, with some swimmers being so disoriented that they swam back to the start in error! I found nearly every stroke a struggle, not the long smooth relaxed swimming I had been relentlessly practicing. Race organisers added an extra half an hour to the time allotted for the swim due to the rough conditions on the day.

Despite the strong cross-current and many precious minutes lost looking for the actual exit ramp from the sea at the finish, I did make it across. Thirty percent of the foreign entrants and forty percent of the Turkish swimmers were rescued by the many safety boats that were stationed along the route and didn't complete the race. Reunited with my mobile phone at the finish, I made a tearful and exhausted phone call to my mom in Albuquerque simply to say, "I just swam from Europe to Asia!" Admittedly, I still fear the deep, but I have learned to relax in open water now and enjoy the refreshingly different opportunities and challenges it provides.