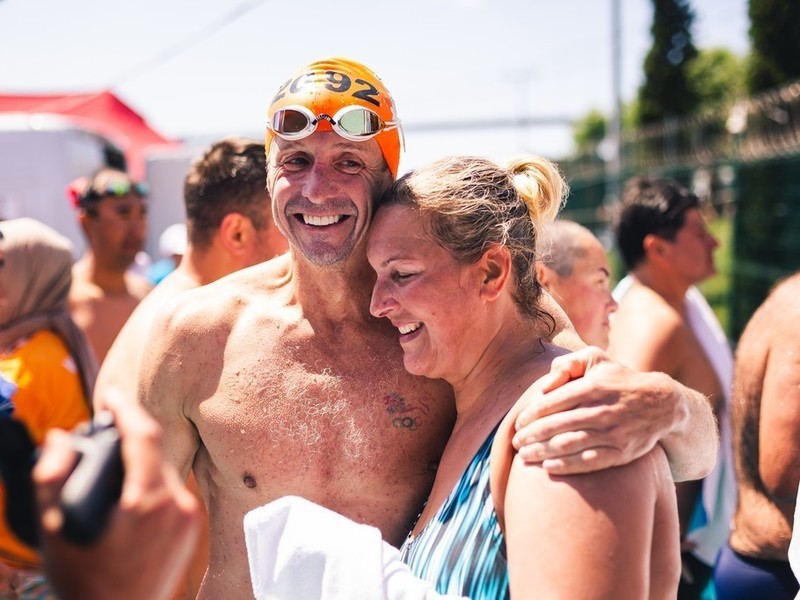 Burn Survivor: How I took on the Bosphorus Swim

Years after having an accident as a child that left her with 3rd degree burns, Sylvia decided enough was enough and began sharing her story of learning to love her body. She campaigns for acceptance and visibility of scars and skins conditions with her Love Disfigure movement. As part of her mission to raise the profile of the diversity of all body types, she decided to set herself on a challenge that would test her body and show off all it could do despite her scars. Facing her fears and doing something incredible in the process, Sylvia took on the Bosphorus Cross Continental Swim this summer. Despite the nervousness she felt, she was capable, and this is her story of how her journey was all worth it.

Summer 2019, I took on a challenge to swim the Bosphorus and raise awareness for people with hidden disfigurements and differences. As a child burn survivor, I spent most of my life suffering with severe depression and low self-esteem due to the scarring on my back. This challenge was important for me to also show those who suffer long term with their mental health that anything is possible, and we can still achieve great things in our life. Back in the summer of 2018, I approached Professor Greg Whyte OBE, a physical sports expert, to set the challenge and support me along the way with the help of his friend Ben Hull, who filmed my swim. Greg sent me training plans that involved indoor swims, exercises and stretching plus some outdoor swims from January onwards, and we met every 6-8 weeks to check my progress. We also swam in the river and sea together to help me get some idea of what open water swimming was like as it was all very new to me. July came around very quickly and it was time for me to face my fears head on. The day before the swim, we were taken out on the ferry for the ride up to the start line. Looking out to sea, it really hit me that I was about to do something that felt impossible and very scary. I wasn’t an open water swimmer and my nightmares growing up were about me drowning in the sea. How was I going to get through this? I was holding on to the belief that Greg was there for me, but the realisation soon set in that he wasn’t going to be able to swim the Bosphorus for me. I went back to my hotel room and didn’t want to talk to anyone that night. I wanted to spend time alone so I could try to get my head around what I had let myself in for. That night, I remember listening to the SwimTrek crew telling us what to do if anyone wanted to stop whilst out there in the sea. I had got this lodged into my head almost as if I wanted to give up before I even began. I knew that my journey was so much more different to everyone else’s as most people had swam open water before and this was my first time. The following morning, we boarded the coach down to the dockside where the boat was ready to take us up and across to the start line. There were two different hat colours that separated everyone by age and by boat and luckily for me, Greg and I are of a similar age, so we wore orange hats and boarded the second ferry together. I was quite overwhelmed by how many people were at the event, but there were people of every size, age, ethnicity and disability. It helped me to calm my nerves at first but looking out to sea and noticing the wind had picked up and how choppy the water had become set me off again feeling nervous. Suddenly everyone stood up and began making their way out to the pontoon rigged up to the ferry. Everyone seemed to be so much more experienced at swimming open water and it scared me a bit. Greg and I both made our way over to the side of the platform where I jumped into the water and felt like I was going down and down further into the depths of the Bosphorus. I suddenly had a flashback as if I was still in one of my nightmares and this is exactly what I had imagined happening to me. As I popped up to the surface still in the same position, I could hear Greg calling me to start swimming. All the swimmers were told earlier to make their way to the centre of the Bosphorus and then begin to swim up towards the finish line. The hectic rush of all the swimmers was so chaotic and felt to me like being in a washing machine with white water and huge splashes all around me. I just froze and didn’t want to move and at this moment I thought what would happen if I was to give up right now. There were helicopters, boats and drones plus deep sea divers all around us. I knew that I was safe, but the water just seemed so big that I then began to think nobody would see me. It was at that moment I realised that I needed to trust Greg and follow him to the finish line. I needed to at least try and swim out to the middle where the current would help assist me down to the finish. I began to swim out to the middle where everyone was rushing to and I use the word rushing because that’s exactly how it seemed. The water changed from warm to cold and I realised that I was in this current that had a wonderful calmness to it. It felt so beautiful to swim in and made me feel more relaxed. I would stop and do some breaststroke just so I could see Greg where he would reassure me and encourage me to continue. When I reached the first bridge and swam underneath it, the water suddenly felt cold and dark. Looking up and seeing the bridge above me felt surreal, almost beautiful to me. Never did I imagine I would ever in my life swim under a huge bridge in the middle of a strait. As I swam further down, I began to pick up my rhythm and really enjoyed swimming, letting my mind wander and think about sweet things like the film Finding Nemo. I just needed something funny to help lift my spirits and send me some positive vibes to carry on. I also thought about my lovely family who would be willing me on back home and my father, who had passed away some years ago, who had always encouraged me to swim as a child. I felt like he was with me in the current as a piercing light stayed in front of me the whole time throughout the swim. It was easy to follow the centre of the Bosphorus as there were so many large groups of people swimming together in the same direction. Towards the end of the swim, Greg told me to look back so I could see how far I had come. I turned around and just couldn’t believe it. It was now time to swim across and out of the current. This was the hardest part of the swim as you needed to conserve as much energy and strength as possible to get yourself across so you could swim straight over to the finish line. I had heard stories earlier on of people being pulled past the finish line from the current and I knew that there was no way I would allow this to happen to me. After all, we had come this far, and I didn’t want to let anyone down including my supporters.

I began swimming hard for about 50 metres but looked up to find myself still in the same spot. Greg shouted across to me that it was time to really push through and out of this counter current, so I looked at him and nodded then swam for my absolute life as hard as I possibly could. I didn’t think about anything but reaching that white platform then boom; there in front of me were people climbing up the steps onto the pontoon, the finish line. At that moment my back gave way and I couldn’t climb up the steps. I had to use my last piece of strength to get up out of the water and as I almost fell forward onto the second platform that collected our finish times, I broke down crying in Greg’s arms. I looked around me and noticed how happy and relaxed everyone seemed to be, but I knew that I was on a different journey to everyone else. I knew that this was my first ever challenge and something I can look back on or show my grandchildren that I actually did finally achieve something wonderful in my lifetime. My life had been plagued with severe depression, suicidal thoughts and chronic pain from my accident falling into boiling water, and yet here I was loving water and enjoying it all over again. My final finish time was 1 hour, 28 minutes and 17 seconds, and I placed 35th in the ladies category for my age group. I wasn’t swimming for a time, but it was definitely a bonus and anyone who thinks about taking on this journey I would say this: please do it, it is such an amazing achievement and a beautiful swim. Anyone who has burn scars, visible or hidden, health or skin conditions that affect their appearance, there are so many other wonderful swims out there that you can also get involved in, and with the right tools and training, you can do this too.

Sylvia's story was filmed as part of the documentary EXTRAORDINARY PEOPLE, which will be released by Great Whyte Productions.

Congratulations Sylvia and thanks for sharing. Your experiences spoke to me as a person whose skin is disfigured from cystic acne. In some ways I grew up at the beach but quit going in my teens because some people stared at the cysts on my chest and back. The worst of the acne was over by my mid-20s but it left a mosaic of scars that are still visible forty years later. Most people are too polite to say anything, but innocent children still sometimes comment when I swim in a public place. I was a bit nervous when I signed up for my first SwimTrek trip in 2012 and even told my fellow swimmers about it on the night we introduced ourselves. It wasn't a big deal for them and that helped me get over my self-consciousness. Since then, I have been on five more SwimTrek swims--including the Dardanelles crossing in 2015 at age 60. So, your story and sense of overcoming multiple challenges resonated deeply. Thanks again and best wishes, Dirk


posted about 1 month ago