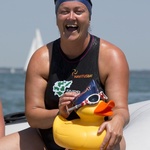 Swim history before SwimTrek I love the freedom and calmness that comes with swimming in the sea especially over long distances – it gives a rare and precious opportunity to switch off and enjoy being in nature. I took up swimming when I was 31 with a mission to swim the English Channel. I didn’t make it on my first attempt less than a year later, but being pulled out and hospitalised with hypothermia and exhaustion after 14 hours taught me more about myself than any other swim I’ve done since. I made it across the Channel on my second attempt and went on to swim various international stretches including the Strait of Gibraltar and the Hellespont Channel. In 2012 I embarked on my Five Island Swim Challenge which included solo swims around Jersey and Portsea, and culminated with a 56-mile swim around the Isle of Wight. My latest project, the Balearic Swim Challenge, to swim between the Balearic Islands and the Spanish mainland ended abruptly in May 2016 when I was rushed ashore from the Menorca Channel in a lifeboat after being stung unconscious by jellyfish. After ten years of endurance swimming during which time I’ve raised around £70,000 for charities, I’m now focusing my energies on coaching and helping other people to reach their potential both in and out of the water. Locations guided on Mallorca LDT. I enjoy being part of the Mallorca LDT team as I love to support others in achieving their goals and pushing themselves to exceed their own expectations. I also enjoy sharing my experience of organising my own swims and logistics, fundraising and sponsorship, learning from unsuccessful attempts and helping people to find their own way of preparing for challenging swims. Most memorable swim moment A memorable moment was finishing my swim around the Isle of Wight in September 2013 surrounded by a flotilla of boats and cheering crowds, I was the fourth person to complete the feat and the first in almost three decades, and it was an incredible feeling for all the hard work to pay off. Overwhelmed by relief when I finally punched Ryde Pier to mark my finish after swimming non-stop for over 26 hours, I nearly broke my hand and came out with something deemed so explicit by the TV crews that they had to chop it out of their broadcasts! Top swimming tip For long distance swimmers I always say keeping a sense of humour is a priority. If you can’t laugh at yourself eating rice pudding out of a Ziplock bag in the pitch darkness in the middle of a lengthy stretch of water with waves breaking over your head then you should probably take up a different sport. Interesting fact about you I swam two lengths of Windermere topless after the elastic failed in my swimsuit at the beginning of the swim and as a result I hold the record for the first Topless Double Windermere!

Send a private message to Anna
Call me back