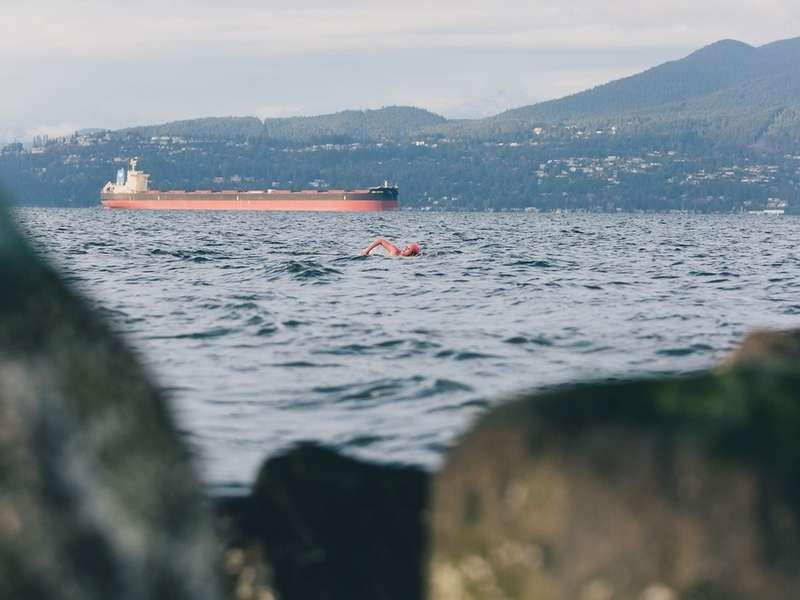 NOW I HAVE TO SWIM THE ENGLISH CHANNEL

The world is covered by more ocean than land and there is an uncharted playground of water in British Columbia. So why not try something that is done less? You might discover more.

I was a synchronised swimmer as a teen, but I quit due to a combination of the teasing and my lack of success.

I am still a beginner in adventure swimming, but I can’t do much else right now. A couple of years ago I broke up with a long-time boyfriend and it led me to start training for a triathlon. I got back into the pool for the first time in 12 years. I did the SwimTrek boot camp and I failed so badly. I panicked, was violently sick and almost got hypothermia (in a wet suit!). But I only learned this by TRYING. Three weeks later I was swimming 10 hours down Indian Arm.

While continuing to train for my first triathlon, I started to get hip problems. The moment I got the news about my hip, I cried. My Ironman career ended before I could even start a race. But I’d had a taste of adventure swimming and something in my head said 'now I have to swim the English Channel'. The Channel isn’t my ultimate goal, it’s just one of many. I have a big list of swims that I want to do, and it's gonna take time!

I never would've thought that I was tough enough to swim with stinging jellyfish for six hours and then get right back in the same ocean the next day and get stung again for two more hours. Especially when there’s no real reason for it. I do want to quit -- all the time. But I don’t. That’s when I know I am doing the right thing; when I want to get out.

I’m in my 30's and have just begun my career in adventure swimming. I swam across the Georgia Strait on June 25th this year, which is from mainland BC to Vancouver Island. It’s 30.5km across and I did it unassisted, according to International Marathon Swimming Rules. I had 1 swimsuit, 1 cap, 1 set of goggles and 2 lights. The water temperature averages 16° and one thing that’s not required, but always useful, is a boat with a crew of superheroes on-board.

They say channel swimming is 80% mental 20% the rest. No matter how fast or slow you swim, it’s your ability to adapt to tough conditions. To pull out is always a touch away -- your boat. There aren’t many sports like that where simply a fingertip is the difference between fighting on and being done.

This mindset has been a lifesaver for me while out in the ocean. I was lucky enough to be mentored by a few channel swimmers. They have given me the physical tools. They don't know me well, but they believed in me.

I MADE A DECISION TO ENJOY THE SWIM FOR AT LEAST THE NEXT HOUR.

While swimming the Georgia Strait, I noticed my friend Emily at the front of the boat staring peacefully into the mid-afternoon sun. It helped remind me that this is an experience of a lifetime; if she can enjoy it while supporting me, I damn well can!

At that moment, I made a decision to enjoy the swim for at least the next hour. I looked down the Strait and it had calmed down to a glassy glow. I felt lucky for the first time in a long time.

What I realised was that my mind had finished stressing about finishing the swim. I was just enjoying it. I had already been physically sick and kept swimming (and digesting the food you need to take in). I knew I wasn't done, but I knew at least I would get there. I kept a calm, consistent stroke rate for most of the 11 hours and 20 minutes of the swim.

MY HEAVEN AND MY HELL.

I was born in Vancouver, British Columbia to two backpacker parents. When I was young they took me to Southeast Asia to go backpacking and learn about the world. Exploring was my birth-right. This may have isolated me as a young child, but it also exposed me to wonders beyond my imagination. I never fit in and I was teased a lot, but I kept dreaming; I had a zest, a drive.

I was also in the water at a young age. I followed in my mother’s footsteps and competed in synchronised swimming. I always came in last place, and the teasing ensued, so I stopped swimming. I move to Europe in my 20's to study, and I fell in love with Blues and Rock 'n Roll -- the music of the common man's struggle.

I feel like now I’ve finally found my own struggle. And music is my guiding beat (my metronome), keeping my arms moving in my hour of need as I’m out in the middle of a vast ocean. The water has been my salvation -- my heaven and my hell. The ocean breaks even the strongest rock face, but if you hang in there long enough and fight though the darkness, it will give you the opportunity to build yourself back up even stronger.

THIS IS WHY I CHANNEL SWIM.

Everyone’s body handles cold, sea sickness and stomach acid differently. All of this is normal. As far as I’m concerned there are two keys; 1) trial and error and 2) only listening to those who have actually channel swum. Until you actually experience it, it's impossible to teach others.

My dream team is me and my dad. It's a match made in heaven. I would've never imagined that my father, more than my coach, would motivate me to swim like I do. When it's just me and dad, it gives me an extra reason to just suck up the pain to get back to the car waiting on the other side. He puts his trust into me to swim and I put my trust into him to feed me and guide me. So, no matter what I feel, I just try to put my head back in the water. I know things have been worse, they can get worse, and will get worse. As long as I keep moving and eating, I am fine.

But don’t forget how beautiful the scenery is!

"You can inspire others just by being yourself. But sometimes it takes a while to find that path."

THERE IS ALWAYS A PLACE IN THE WORLD FOR PEOPLE WHO HAVE NO PLACE.

Swimming has allowed me to believe in myself again. I can push through my misery when I’m out in the ocean, better than on land. This allows me to heal from my past. I know that I struggle to connect with people and to express myself – it's why I left one of the top art colleges in Europe.

There is always a place in the world for people who have no place, you just have to dig under enough crap to find it. Or, in my case, swim great distances. Fear can be tamed by experience and exposure.

Naturally, my biggest challenge is staying motivated in Fall, when the water turns icy cold within a few weeks and the daylight disappears.

I do live with anxiety and depression. I’m a wild woman on the best of days. But this is why I belong in the sea. The sea can sooth the soul and fear can be your best friend and your worst enemy. I can now accept both.