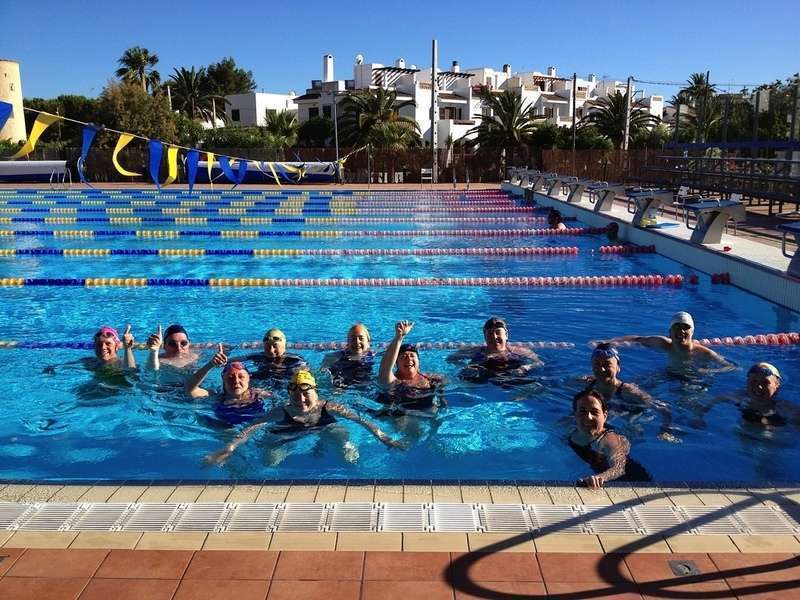 Skills I have learnt along the way

After reading my blog telling of my Open water journey, a friend I first met on a SwimTrek trip to Croatia wondered if I was going to write about my progress skill wise over the last four years. I have to confess, it hadn’t crossed my mind, but after several different guides, coaching methods both in the sea and pool, I thought it would be an interesting exercise!

My first trip was the introductory trip to Mallorca. I arrived as a recreational pool swimmer, convinced my stroke was about as perfect as it could be. Wrong, on every count!! My bubble was about to be burst in the nicest way possible by our two lovely guides, Emile and Chris.

My first foray into the sea consisted of a quick whizz round the bay to be put into groups for the rest of our swims. I won’t say I wasn’t pleased to be in the fast group - three of us were awarded our pink hats and we had the dubious honour of being labeled “the quick ones”.

Sighting was the first skill we had to learn - great fun and very necessary. I didn’t have any real problems with this and happily set off on the first proper swim.

The first pool session came that afternoon so we all walked up to the beautiful Best Centre at the far end of town. I can honestly say I have never swum in such a magnificent pool. It is stunning and worth going to Mallorca just to have a swim in there.

We were videoed from various angles during the afternoon and given a few drills to attempt. As I had never had a proper lesson before, I had never been on the receiving end of the tips I was about to be given. I was convinced my stroke was just about perfect - how naïve! I was going to be proved completely wrong!

We all watched each other’s video analysis taking on board the suggestions for improvement. My turn came and I waited eagerly to hear all the good things sure to be said. Imagine my horror when the guides agreed that my stroke was the one which would benefit from the most change! I didn’t know whether to laugh or cry! I couldn’t understand - I was in the fast group, I was convinced my stroke was as good as it could be! Yes, I was quite quick, but my body position was completely flat with no rotation at all, my arms were crossing over on entry, I was using the keyhole catch under water and I was in danger of knocking everyone out who dared to swim in the same lane!! Not much to work on then! I was breathing every fourth stroke which was ok for about 200m, and then I had to revert to every stroke. Not ideal in open water. My arm entry was flat so I was slapping the water creating a lot of bubbles. I really didn’t know where to start, but I definitely needed to do something.

Back in the sea the next day I concentrated on a high elbow and trying to create less splash. I decided that bilateral breathing was never going to happen so my very kind swim mate, Ann Marie, swam on my left hand side every time so I had a spotting point, particularly useful when the coast on my right. She’s continued to do this on every trip we’ve been on together - a great swimming pal!!

The pool sessions were invaluable during the rest of the week - I learnt to rotate and worked very hard at keeping my elbow high. Once back in the sea, I worked on my stroke - I concentrated on completing the increasing distances and enjoying the lovely warm water. I vowed on my return to the UK to spend some time on every pool swim working on my stroke. However, with no one to point out what was wrong, I’m sure the changes I needed to make didn’t really happen. I went to Croatia the following year, having upped my distance, but with a stroke fairly similar to the one I left in Mallorca. On this trip there was no pool coaching, just open water swims. We were videoed again and analysed. Mine wasn’t as bad as the previous year - I was rotating better, but that was about all. I was determined to make some changes this time round, so with the help of Bruce and Pete, I set about altering various aspects – most important ones for me were to try bilateral breathing and to avoid the flat arm slap.

Pete gave me great pointers – imagine I was posting a letter in a post box, shoot my arm down and exit the sea with a high elbow. I had this going through my mind on every stroke and it made a massive difference. The flat arm was not so flat anymore and there was less splashing. He also gave me ideas for bilateral breathing which really helped- not always three breaths, sometimes slip in an extra one on my favoured left side. This was quite a revelation to me and was the start of me really making a huge effort to embrace bilateral breathing.

One other thing I changed on this trip was to slow my arm rate right down. I was trying hard to keep up with Ann Marie, but was thrashing through the water so quickly I soon became exhausted. Pete told me I was doing double the rate I needed to – how on earth could I keep swimming faster if I slow my rate down? I tried it and guess what- it worked. I felt so much more in control of my stroke and didn’t finish each swim feeling quite so bushed.

All in all, a great week and some huge improvements made.

Next trip was Montenegro - fantastic accommodation, same stalwart group of pals on the trip but different guides - we were lucky enough to have Sian, the Channel champ and lovely Kelly. Both had a wealth of experience and more ideas and tips. I unfortunately had a shoulder injury which really put paid too much improvement work on this trip - I was pleased to reach the end of each swim in one piece, but felt gutted I’d not moved on from the last trip.

I returned home after this trip frustrated - I was upset I hadn’t been able to enjoy the swims as much as I would have liked and set about getting my shoulder sorted. Fortunately it was nothing serious and half a dozen deep tissue massages (painful in themselves) completely sorted the problem out.

I then took my teenage boys to Sivota on the family trip - my then 12 year old was keen to give the swimming a go, so we did the shorter afternoon swims. We had the use of a lovely pool to film in and he was delighted when his arm position was used as a demo to the rest of the group as being “near perfect”!! Seems I should have been watching him all along!! He took to it like a duck to water and apart from being very nervous on the crossing, he coped brilliantly. My stroke was continued work in progress, but as the water was so smooth, I determined to get to grips with the bilateral breathing. I was feeling much more comfortable with it and managed to achieve a near 100% success rate on all the swims.

We returned home with a renewed vigour and it became my mission to only swim bilaterally in the pool. I have done this ever since and would never revert to permanent one sided breathing.

I returned to Mallorca a year ago on the improver’s trip. I think this was the trip where I made the most progress in actually visibly seeing a change in my stroke. We worked on slowing everything down, lengthening the arms, superman position, breathing on the wrong side, catch, skimming the water, using a snorkel to see what we were actually doing under water. Comments after filming this time were much more complimentary and I felt much happier with my overall stroke. My leg kick is strong so I didn’t want to reduce that, but I started to use it less as my arms started to do the right thing more and more. The coaching on this trip was exceptional and I left feeling very happy.

Roll on to Crete and a different challenge! The daily swim was much longer so it was a case of finding a rhythm to keep you going for no less than 4km, 5 km on the last day. This is where some more distance work at home would have helped. However, my stroke continued to improve, I kept a long arm and slowed everything down again. I finished that trip feeling very happy.

Oman in February this year was when I truly felt I had done the best I could. I felt strong and able to cope with the 6-7 km of swimming a day. I concentrated really hard on my form and felt I’d swum the best ever. I would have hoped so though after so many trips and so much help-work in the pool at home is crucial, not only building up distance, but working on drills. Previously, I was only interested in how far I could swim. Now, I use one session a week purely on technique and I think it is paying off. I obviously still have room for improvement, but when I compare my stroke to that of four years ago, it is totally different. I am happier that I am now the owner of a fairly decent front crawl stroke that I hope will see me through many more trips.

Along the way, other skills I have learnt thanks to these trips include being brave enough to travel on my, being confident enough to talk to complete strangers who I may previously have thought were out of my depth - I have met from doctors to photographers and people from USA across to Australia. What a great way to make new friends and open up a whole new friendship group. I have learnt to be tolerant when I perhaps normally would have said something, I have tried new foods and learnt new foreign phrases and found a fantastic new hobby. Thank you SwimTrek!!!

Hi Virginia, great post. I am going to Oman in four weeks for my first swimtrek, any tips about the swim? Yours Kim


posted about 3 years ago